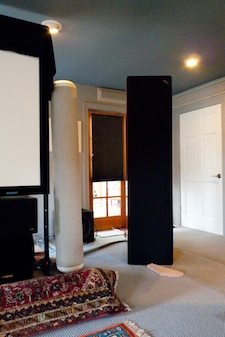 Rule One - Make Sure They Fit

Unless you live in a commercial space and last tenant was a safe manufacturer, your domicile probably wasn't designed to easily accommodate rapid cycling of large and heavy speakers. Before you even think about buying big speakers you had better be thinking about whether they'll really fit in your listening room. Just because you LOVE a particular line array design that's 7 feet high doesn't mean putting a 7 foot high speaker into an 8 foot high high room is going to work out for ya.

One way to insure that the speakers of your heart's desire will actually perform optimally in your room is to hear them in a room with similar dimensions and constructed of similar materials. Hi-fi shows aren't too good for this unless you live in a hotel room. Manufacturer's listening rooms aren't much better unless your home is an industrial space with wallboard partitions.

One source of realistically sized rooms to hear speakers is your local audio society or Audiophile club. Here in Denver we have the Colorado Audio Society, who hosts the annual Rocky Mountain Audio Fest. The Audio Society holds monthly meetings, often at members' homes, where attendees have ample opportunity to see and hear how other audiophiles have handled and solved similar room challenges.

Rule Two - You Better Love Them

The heavier a speaker is the longer you should be thinking of owning it. You don't "just move" a 500+ lb. speaker. The only thing harder than moving a big speaker is selling a big speaker. Often the kind of deep discounts from the original prices that will sell an amp or preamp in a heartbeat on Audiogon won't get any responses if the item for sale is a large discontinued or orphaned speaker. To move such an item seller must often resort to a bigger discount, say more like 60 to 75% off of list, to shake out a prospective buyer.

Look at it this way - the next buyer faces the same shipping and placement problems you had when you bought the speakers new, except without the dealer support and all the additional risks of buying a used piece of gear.

A speaker and an amplifier are two parts of a system that have to work together. Take the best 10-watt SET amp and hook it up to a pair of big 84-watt sensitivity speakers and the results will be less than optimal. The speakers want more power than the 10-watt amp can deliver. Game over.

If you look at the power amp and speakers as one unified component your final results will be closer to the performance that both manufacturers intended from their products. If you're in love with particular large speakers don't be shy about asking the manufacturer which amplifiers they recommend with them and WHY. The answer better be more than merely "They're friends of ours so we often share rooms at shows." Also ask other owners via forums and user groups what amps they've found work well.

Getting a short list of two or three amps that everyone likes with your speakers is a far better than starting with the A's in TAS or Stereophile's annual equipment lists and swapping amps till you get to the Z's.

Rule Four - Do Something About The Room

If you have enough resources to buy a big speaker, set aside some of your cash stash for room treatments. Better yet, think about room treatments BEFORE you buy another speaker, any speaker. Measure your room to find out its strengths and weaknesses. No room is perfect, but the secret of good sound is to work with the room shortcomings - reduce the problem areas and leave the parts of the room that are OK alone.

Rule Five - Don't Even Think about Moving Them Often

Many years ago I visited a guy who had a pair of the original Apogee Full-Range three-way ribbon speakers rigged up on rollers so he could move them back and forth between "home theater position" and "two channel stereo position." Big speakers on roller skates make for easy moves (relatively) but less than ideal for either floor coupling or isolation. The owner also had several pairs of other speakers set up so he could roll them in an out of position. I was tempted to offer to race him - I'd take the Apogees and he could "drive" his Duntech Sovereigns.  First guy to the dining room wins...

Unlike bookshelf or mini-monitors, where you can own a dozen, keep the eleven pair you're not using in a closet and still have room for most of your clothes, a majority of audiophiles can only make room for one pair of large floor-standers. So the bigger the speaker, the more time you should spend contemplating your purchase. Few audio components have a greater chance of reinforcing the old saying, "buy in haste, repent at your leisure" than big speakers.