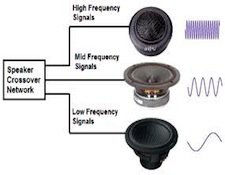 No, I haven't gone over the edge into believing that crossovers harbor malevolent spirits. But for all the good a crossover does for a speaker, it also extracts a toll.

Just as it's virtually impossible to build an active preamp that is as transparent as no preamp at all, it's equally difficult to build a crossover that doesn't alter time domain and affect group delay within its crossover region. The most elegant crossover I know of, the "Infinite Slope" design used by Joseph Audio, deals with crossover-induced time delay by making the crossover do a complete 360 degree phase shift within the crossover zone so the phase shift between the two drivers is less audible. But most crossovers, especially those with more gradual slopes, have audible crossover-induced phase-shift issues within their crossover regions.

Why do speakers NEED crossovers? Because very few drivers of any type - dynamic, electrostatic, or flux-capacitor - can reproduce the entire audible range with equal linearity. Crossovers allow a speaker designer to use multiple drivers specifically created for particular frequency ranges, a three-way design typically has a bass, midrange, and treble driver with one crossover circuit between the woofer and the midrange, and a second one between the midrange and the tweeter.

Back to basics for a moment - a crossover is a filter (or set of filters) that reduces frequencies above or below a particular point. The assertiveness of the filter's reduction above or below this certain frequency is quantified by the slope (or severity) of the crossover's filter, which is measured in dBs per octave. A 12 dB per octave slope, which is a typical "minimum slope" crossover configuration, has a very gradual hand-off between drivers - which means the frequency ranges where both drivers are playing the same note is much greater than with a steeper slope. The problem is that within this frequency range where both drivers are reproducing the same note there is a potential for them to be slightly out of phase with each other due to time and group delays caused by the crossover circuit.  The best speakers come from designers who've mastered the art of reducing or masking a crossover's inherent time distortions.

Is there any way to make a crossover without these issues? Maybe, but it has to be a virtual one. Current technology exists to make a digital crossover that does everything to a signal that a physical one does, but without the delays caused by the resistors in a physical crossover filter. So if the technology exists, why don't more speaker manufacturers use it? Because to use it you must have a digital rather than analog signal. Unless you place a component in the analog signal path that has an Analog-to-Digital and Digital-to-Analog convertor, you can't have your virtual crossover. Emerald Physics CS-3 uses an inexpensive Behringer Ultra-Curve DE2496 box for this purpose. And even though the Behringer certainly isn't the last word in cutting-edge digital design, it still exhibited fewer negative audible effects than 99% of the physical crossovers I've heard.

Of course if you have a computer-based audio system there's no reason you can't have your speaker's crossover handled by a virtual crossover inside your playback software. Any playback software package that supports multi channels has the potential for supporting a virtual crossover. Some programs, such as Fab Filter, let you build your own crossovers, save them as plug-ins, and use them with Pure Music. Combined with a multi-channel I/O DAC, such as the Apogee Ensemble, you have all the fixin's for a far more transparent and time-aligned crossover than any physical design, regardless of the quality of the parts.

Maybe crossovers aren't so bad after all....