All On or All Off? 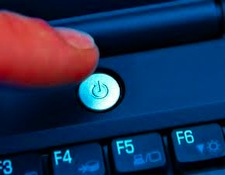 In this age of eco-awareness and conspicuous non-consumption of energy resources, audiophiles are faced with the nagging question - Do you keep your gear turned on and warmed up or do you turn it off between listening sessions?

At different occasions during my audio odyssey I've been on opposite ends of the energy-use scale. Back in the mid-80's I had a pair of Quicksilver monoblock amps that used 8417 power tubes. I had these amps running continuously for almost 1½ years! I got five times the tubes "normal" lifespan, which was not my original intent, but a welcome, if not quite Guinness World record-worthy feat.

Some gear I've owned in the past has been far less energy efficient that what I use now. Two preamps that used to chew through a lot of watts were the Dennesen JC-80 preamp and the New York Audio Labs NCP-2 with its tube power supply. The JC-80 was an energy sucker due to it's all class-A operation. The cabinet used to get hot enough to slow-cook an egg on it. I loved the sound of that preamp, but it's thermal levels used to periodically bake parts inside. I wonder if any are still out in the world in working condition...

The New York Audio Labs NCP-2, brainchild of that glorious audiophile extremist Harvey Rosenberg, used quite a few tubes, both in its primary circuits and its optional tube power supply. The power supply was, in essence, a small OTL power amplifier. It was one warm box. And the initial power draw when you turned it on would cause momentary brown-out. Yep, the NCP-2 was not for the faint of joules.

On the other end of the spectrum, now that I live in Colorado, one of the T-Storm capitals of the world, I turn off everything in all my systems during the summer months, not so much out of eco-awareness as thunderstorm-awareness. But regardless of the reason, my electric bill often shrinks by 20% during the summer merely from all the constant-on power supplies being disconnected from the wall.

Most of the time nowadays I leave the especially power-hungry devices, like power amps, turned off till just before a listening session. Once I turn everything on I usually try to wait between a half hour to an hour before I begin serious critical listening.

In the past I've listened to many of my systems from a cold start-up. With my longtime reference Pass X-3 power amplifier the magic time is twenty minutes - at that point the amplifier becomes more dimensional, and the slight amount of midrange glassiness present at start-up vanishes. And what's twenty minutes. Just long enough to level my turntable, refill all the air bladders, and pick out an LP...