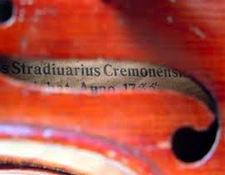 In recent weeks I've seen two articles about "gentlemen" who'd been recently indicted for fraud.  The first was caught selling and appraising fake vintage violins, while the second was caught foisting off fake collectable wines. Their crimes were noteworthy due to their scope and audacity, but such crimes are increasingly common since most vintage collectable markets are plagued by the problems with fakes and forgeries. But I have yet to see it in high-end vintage audio. Why?

During the last ten years two of my other passions - vintage guitars and mandolins and vintage Rolex watches, have experienced huge upticks in fakes and forgeries. And the not only the quantity but the quality of these forgeries has gotten so good than in some rare cases they've fooled multiple experts. I have an Ibanez Johnny Smith model acoustic/electric archtop that was modified to appear to be a Gibson Johnny Smith - and it's such a good job that unless you know or own an original, you won't be able tell the difference. I've also seen many aftermarket non-Rolex parts for vintage Rolex watches that are good enough to require a jeweler's loupe and a ton of expertise to tell from an original part.

But, I've never seen or heard about a fake Marantz model 9 or McIntosh MC-275. Sure, I've seen lots of "Marantz 7 circuits" and recreations sold on EBAY, but that's a different thing.

Some people might think that electronics can't be faked as easily as watches or guitars, but they would be wrong. With a large enough budget and painstaking effort you would be amazed how authentic a "vintage" circuit can look, to the point where even to a trained eye will have a difficult time telling it from an original. I've seen the wiring and circuitry inside faked Gibson Les Pauls. With the "right" parts, assembly techniques, and convincing aging methods, it is very hard to tell if a circuit is thirty years or thirty days old.

Frankly, it all boils down to economics - vintage electronics have yet to achieve the sort of price increases that get faker's juices flowing. Let's look at two categories that do have major problems with fakes - Gibson Les Pauls and Rolex Cosmographs - both have huge run-ups in value, from under $1000 new to well over $100,000 for exceptional vintage examples. That's a lot of incentive for someone with the skills to duplicate a fake. Even the most desirable vintage hi-fi component, such as a JBL Paragon speaker system, hasn't experienced that kind of value jump. And while a Marantz 8B is worth more now than when it was new, it's not the kind of appreciation increase that's been common among collectable watches or guitars.

So, for the time being anyway I don't think vintage audio collectors will have to worry much about fakes. But the minute the first pair of Marantz Model 9 amplifiers go for over $50,000, then we'll start to see fake vintage audio gear oozing out of the woodwork...