With Headphones It's All About the Fit

At the 2014 Rocky Mountain Audiofest's CANJAM exhibits I had an opportunity to try on a lot of earphones -- in-ears, on-ears, over ears, and even sort of near ears, and in every case the most critical aspect of their performance wasn't their frequency response, or overall linearity, or the construction of their drivers, it was their fit. 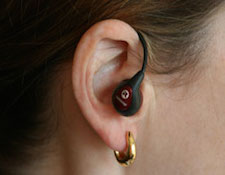 If I was stuck in purgatory and I had to choose between a good pair of headphones, such as the venerable Sennheiser HD600 that fit extremely well, or a great pair of headphones such as the Abyss, that fit badly, I would choose the Sennheisers in a heartbeat. I spent some time listening to the Abyss headphones in three different set-ups at RMAF and in every case I loved the way they sounded, but each time I got into the music and moved my head more than a bit the Abyss would shift on my head. And if I nodded my head or tipped forward the Abysses came sliding off my head completely. For me their fit was an epic fail. Contrast the Abyss with the Sennheiser HD600 or the Oppo PM-1 headphones, both of which fit so well that no amount of headshaking or other body movement will unseat them.

The same rules apply to in-ear earphones, even custom-fitted ones. I have three pairs of custom in-ears at present -- a pair of Shure 500 in-ears that were re-molded by an Fisher Hearing, a pair of Ultimate Ears Capital Records reference monitors, and a pair of Westone ES-5 monitors. I liked the Westone ES-5 monitors a lot, but the left one's shaft was slightly too long and hit the back of my ear canal in a way that wasn't working for me -- every time I moved my jaw the seal would break and I would lose bass response on that side. At RMAF I talked with the folks at Westone and left my ES-5s with them for adjustment.  One week after RMAF the ES-5s showed up on my doorstep, and now they fit so well I can eat an entire turkey sandwich on rye without worrying about the ES-5's seal. I suspect that in the future the ES-5 will see a lot more ear-time.

With universal in-ears the fit is just as important as for custom in-ears or larger over-ear headphones -- if you don't have a comfortable fit the in-ears will spend more time in a case than in your ears. Currently the most comfortable universal in-ear I own are a pair of Etymotic 4P with a double flange ear-tip. I have no idea where these double flange tips came from since they aren't listed among the tip options on the Etymotic site. But sometime in the past I acquired these double flange tips, and for my ears they deliver the best fit.

One of the nice things about universal in-ears is that you have a wide variety of tips that you can try. I have an entire medium-sized Tupperware container full of different tips. On some earphones I use foam tips, others have triple flange or silicon tips. But regardless of which tips I settle on for a particular set of in-ears, I always try a whole slew of different options before I settle on the best-fitting ones.

To sum up: When it comes to headphones, the fit is everything. If the cans don't fit they won't sound as their makers intended. Also if your headphones don't fit right they probably won't be comfortable, and if they aren't comfortable you won't enjoy using them, so you don't use them. That equals money wasted that you could have spent on something  you would have really enjoyed. 'Nuff said.