Dion DiMucci was one of the first wave of original rock and roll stars to make it big in the late 1950s and 60s. Dion is a survivor on so many levels, still here with us today making fine fine music. While on tour in the 1950s, he avoided getting on the doomed plane that included Buddy Holly, Richie Valens and The Big Bopper. Dion also survived a bad drug habit and has been sober since the mid 60s. 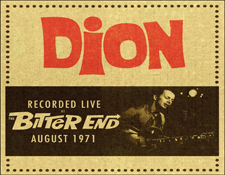 The Beatles revered Dion so much they put his picture on the cover of their legendary album Sgt. Pepper's Lonely Hearts Club Band. A street kid from the Bronx, Dion came up through the ranks just like so many of today's hip hop and rap stars -- creating a new vocal sound on the street corners that captured the imagination of several generations. He s one of the early inductees to the Rock & Roll Hall of Fame

Over the years Dion has remained true to himself, pursuing his musical dreams across genres -- from Doo Wop and Rock 'n Roll to Folk, Blues and even Spiritually driven music.  Dion has influenced generations of artists from The Beatles to Bruce Springsteen.

The folks at Omnivore Records have just released an archival recording of a solo acoustic show Dion performed Live The Bitter End in NYC in 1971. It is a gem that sounds fabulous. 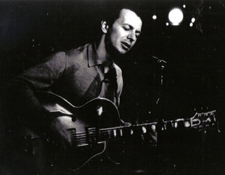 Live without a net and armed just with his voice and an acoustic guitar, Dion is clearly unafraid to reinvent a song to make it his own. He offers up some really interesting interpretations such as a version of The Beatles' "Blackbird" that uses many different chords and an almost bluesy approach.  Dion can switch gears on a dime, moving from a blues-based Chuck Berry cover ("Too Much Monkey Business") to a folky Dylan song in a heartbeat ("One To Many Mornings).

One of the biggest surprises is to hear what a badass guitar player Dion is -- while I have a bunch of his late 60s and early 70s solo albums, I never really stopped to look if he was playing on them, I just assumed he'd hired session players. My bad, as they say....

It's been a lifetime since he made his Doo Wop-flavored breakthroughs in the 1950s with his band The Belmonts ("I Wonder Why," "Teenager in Love") and almost as many years since his swaggering early 1960s solo hits  ("Runaround Sue," "The Wanderer," "Ruby Baby").  And even after his comeback smash folk pop hit in 1967 ("Abraham Martin and John"), most don't know about the man's acoustic roots.

Hopefully, some of you, Dear Readers, will take a moment to pick up this fine new archival release to rectify that issue : this is a complete 1971 solo acoustic show from The Bitter End in New York City.  On this release you'll hear Dion strip back "The Wanderer" back to its Hootchie Kootchie Man-esque roots (with a small bit of tree-hugger humor directed at the early 70s post-Woodstock hippie generation). 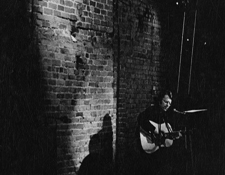 This crowd is clearly there along with Dion on this journey, listening intently and appreciating his considerable guitar skills as much as the oldies but goodies hits. Even with all the early rock hits, Dion honed his guitar slinging chops like so many others on the NY folk scene, playing around the clubs there. Apparently, he even spent a bunch of time down in Miami where he got to hang with the likes of the great Fred Neil (writer of classic pop and folk songs such as "The Dolphins," "Everbody's Talkin'" and "The Other Side of This Life").

On this recording you'll get to hear Dion tackle Leonard Cohen ("Sisters of Mercy"), Dylan ("Mama You've Been On My Mind", "One Too Many Mornings") and even Lightning Hopkins ("Drinking That Wine") and Sonny Boy Williamson ("Don't Start Me Talking").

It's an intimate and well recorded live show that sounds really nice all things considered -- given that it was made from a 40 year old tape that has not deteriorated. Even though it is only available on a CD, the sound is really very enjoyable.

Plus, its a new Dion recording, and for that we can all rejoice!

Get this one soon...