How Many Ways Can You Play A Music File?

Usually a day or so after I complete an equipment review it's time to rearrange components and remove the gear from the completed review to make room for the next one. Often this involves changing out more than one component. Recently I completed a review of a streaming device that included a preamplifier and power amp. Replacing it involved adding at least two components - a power amplifier and a DAC/Preamplifier (and then a source). As with any equipment swap, my aim was to get back to the same level of functionality as the previous set-up.

One of my primary goals of any current set-up is access to Tidal streaming at the highest quality level possible. With the prior set-up it was easy - the Naim Uniti Nova had two ways I could access Tidal - directly via a built-in Tidal app or via Roon (since the Naim is a Roon endpoint). While neither method gave me access to decoded MQA (since the Naim Uniti Nova does not support MQA) but at least I could do the 1st MQA unfolding via software.

The first replacement I tried was the Oppo HA-1, which has plenty of inputs, both analog and digital, but it does not have Tidal streaming built in, so that had to come from an external device (which also meant no full MQA unfolding since that must be done in an MQA-enabled DAC.) Also, currently the best stand-alone streaming sources I had on hand were the Muzo Cobblestone and the Sonos Connect, neither of which supports higher resolution streaming (both limited to 48/16). After a day I decided to try something else.

The second replacement solution involved the Cary DMS-500 in place of the Oppo HA-1. The Cary (which I am reviewing for Home Theater Review) has a Tidal App built in, as well as MQA capability, so it should have covered my bases nicely. But the Cary also had one shortcoming - no analog inputs. I use the analog input for the Sony HAP-Z1ES player, which has no digital outputs, only analog ones, and even though it is nearly five years old, works perfectly and sounds great, especially on native DSD material.

With the Cary I had no analog inputs, so what could I do? 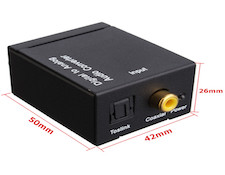 What I did was this: several months ago, I purchased an analog to digital converter from BangGood (a Chinese direct sales site) for $15. It had one pair of RCA analog inputs and S/PDIF and Toslink outputs. I connected the single-ended RCA analog outputs from the Sony HAP-Z1ES player, converted them to digital via the little box, and then connected the Coaxial S/PDIF output from the converter to the Cary DMS-500. I set the Cary so it upsampled the output from the converter (which was 48/16) up to 384/24 via Cary's internal upsampler. So, a file that started out as a 5.6 DSD and was then converted to analog by the Sony HAP-Z1ES, was then converted to 48/16 digital by the BangGood A/D device and finally upconverted from 48/16 to 384/24 by the Cary DMS-500. That file, using conventional audiophile terminology, had been converted more times than a Jewish Buddhist...

Conventional audio thought would indicate that a file that has been converted three different times into three completely different formats (DSD, analog, and PCM), should have suffered noticeable sonic degradation as a result of all these conversions, right?

Because I'm the curious type I decided to listen to some of my own recordings that were originally 5.6 DSD through this signal chain to see just how noticeable the degradation actually was. I was more than a little surprised to discover that not only did I not notice any obvious sonic degradation, but that the results still sounded very much like what I expected to hear from the original, unconverted file. Depth cues and subtle spatial information were all still perceptible, and the harmonic balance was unaffected. I have the same files that are in the Sony's internal hard drive on my NAS drive, which the Cary could access directly, so I did some comparisons between the unmessed-with 5.6 DSD file and the three-times converted signal chain. Yes, there were slight sonic differences, primarily in terms of image size (the DSD file created a slightly larger soundstage) and more clearly-defined space between instruments. 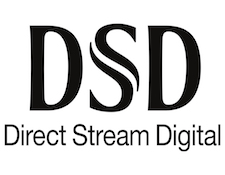 I was surprised by how close the triple-converted file sounded to the original. Would this always be true of any file and any conversion process? Probably not. Obviously, the quality of the conversion and upsampling will have a big effect on the final results. But even allowing that this conversion methodology was relatively benign and better than average, it still does give credence to the idea that the original recording quality and mastering (in the case of my recordings there was no after-the-event mastering, my files from the original event ARE the masters) has a greater influence on the level of sonics than the bit-rate or format used. And while I would agree that something that was recorded with a Dixie Cup and a string will never sound like it was done with a Telefunken tube mic into a Neve console, file conversions by themselves do not mean the sound will be inexorably ruined. Indeed, unless you do direct A/B comparisons, you may not hear any robust or even slightly perceptible differences between the original and the conversion.

We audiophiles hear and see a lot of information that doing certain things, whether it's upsampling or upconversion or transcoding or MQA, will have pernicious final sonic results. Sometimes critics even have gee-whizz charts and graphs to prove that something should or should not be audible.

But in the end the only sure way to know, in a particular system, for yourself, if a file conversion (or any change to your system) has an audible effect is to listen for yourself; so that's why we audiophiles do what we do...