"And she's buying a stairway to Heaven ..."--Led Zeppelin

We've discussed distributed music server systems like Sooloos and Roon and the relative advantages of dedicated Roon servers, really just purpose-built computers with stripped down versions of the Linux operating system running nothing but RoonServer (formerly called Roon Core). In the old days, Roon was a closed system; but times have changed and RoonServer no incorporates a "plugin" design that lets you install custom DSP functions for processing music in "special" ways. At the simplest level, all music servers use DSP even if the only point is to get the musical data stream from point A to point B; however, some organizations, such as DSPMusicLabs.com, have begun to develop more sophisticated algorithms (or processes/techniques) and functions to enhance sound in different ways including reconstructing missing information from lossy formats such as MP3 and reducing noise of all different kinds. The latter two techniques usually require more processing power than simply getting the music from point A to point B; and new classes of physical servers have come out that support "DSP" by name although this generally refers to what I call "special" DSP.

Purpose-built computers running stripped-down version of Linux and RoonServer have been around for a while. Some of the best, by reputation, come from Antipodes in New Zealand (the DX and the soon-to-come CX as examples) and have been heavily optimized for processing music. At a lower price level, Small Green Computer makes some very nice machines, some with silent (fanless) enclosures and, like Antipodes, some with built in CD rippers and/or SSD's (Solid State Drives) for storing your music without an external USB drive or NAS. At the more entry level, you can get kits from Amazon for simple but powerful computers made by Intel as part of the NUC series that run a custom OS from Roon called ROCK or RCK; although, only some of those will run RoonServer. As a general rule, the more powerful the computer, the better the sound; and, like most most thing audiophile, the more purpose-built the computer, the better the sound. In almost all cases, these computers come "headless", meaning that they don't have a screen, keyboard, or mouse but get controlled over your home network generally by a browser like Chrome or Safari. Also, once you get up to a model with an Intel i7 processor, at least 16GB of RAM, and a 64-128GB SSD (for the OS and RoonServer not music storage), you can easily run "special" DSP plugins without too much latency (delays in the transmission of musical data) or errors in processing.

RoonServer was deliberately designed to be run on fairly basic machines but extra power can't hurt and it works fine on multipurpose computers likes Macs, Windows machines, and full Linux boxes running versions of Linux like Ubuntu. However, the less the computer has to worry about, the more it can concentrate on reproducing music (speaking metaphorically). I currently run RoonServer on a 13", 2014 MacBook Pro and it works very well although it does require an occasional restart sometimes seemingly out of nowhere.

There's no reason a music server can't have a built in DAC or even an amplifier. It's not necessary and, sometimes, having each device dedicated to a specific task can sound best but not always. A device like the Antipodes DX, particularly with internal music storage, can act as a combined NAS and RoonServer sending music to many different Roon "endpoints" on your home network. These "endpoints" can be streaming DAC's or they can be network bridges that connect the server to a more conventional DAC. Many bridges without music storage or internal DAC's exist from the small to the large such as the Sonore microRendu, the Bryston [Raspberry] Pi, and the new bridge from dCS. Higher prices and more sophisticated processing doesn't necessarily relate to better sound but it can. Also, stand-alone music servers with no Roon compatibility that pair 1:1 with a DAC exist most notably from Aurender, such as the N100H, the N10, and the W20. It's not that one approach is better than another. They're just different and what works best for you can depend on many factors. Having said that, the distributed nature of Roon, it's "intelligent" playlist functionality (called Roon radio), and it's ability to support third-party plugins are very compelling reasons to adopt it as a standard but it's not necessarily for everybody. 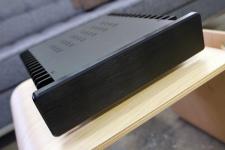 As I mentioned a few blog posts ago, I'm personally interested in getting an Antipodes DX (or CX) to replace my MacBook Pro for running RoonServer to get better sound and greater reliability (hopefully not as much rebooting). However, in principle, a higher-end model from Small Green Computer, like the sonicTransporter i7 for Roon "DSP" (meaning RoonServer plus what I call "special" DSP or plugins) could offer many of the same advantages as the Antipodes at a much lower price point. To the best of my knowledge, all of these devices have the ability to support streaming music services such as Spotify and TIDAL [Hi-Fi] that bring music into your home over the Internet from server farms (vast arrays of music databases often in remote, secure locations, i.e., "the cloud").

For now, only time will tell what exact technology will prevail ...