Who Is This Euclid Guy, And Why Is He Screwing With My Cables?

Aw, come on; you know who Euclid is - he's the guy that that street in practically every town was named after. He's also known as "the father of geometry", and one of the things that High-End cable designers always seem to claim for their products is construction based on their own, specialized and better, "proprietary" geometry. 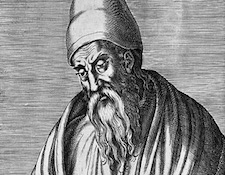 Does that term "proprietary geometry" actually mean anything? Or is it just the kind of "voodoo marketing hype" that trolls and audio unbelievers are constantly accusing cable designers (and even cable believers) of? If it's real, WHAT does it mean? Is it possible that they've really discovered some new way that, for example, the area of a round cross-section High-End cable (unlike every other round object in the world), ISN'T calculated as A = πr2?

Actually, for cables, I don't think the term "geometry" is all that good, and, if it were up to me, I would have tried to find some term other than "geometry" to describe a cable's construction layout. But, of course, even back when I owned 'XLO, it wasn't up to me: The term had already been around forever and, like another weird cable industry practice that I've never understood -- measuring interconnects in meters, but speaker cables in feet -- using it was just something that you did.

Does it have ANY "real-world" application, though? And if so, what can that be? 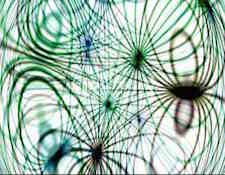 The easiest way to figure that out as it regards cables is by looking at what everybody DOES agree are significant factors affecting cable performance. Before we do that, though, let's first define - at least for purposes of this article - what a cable is: In its simplest definition, a cable is a composite structure intended and used for the purpose of carrying one or more signals.  Unless the signal(s) are "multiplexed" in some way, or unless all of the "hot" leads for multiple signals are separate and all of the "ground" leads for those signals are combined in one or more conductors, two conductors will be required to provide the "going" and "return" paths for each signal, and a "conductor" will be defined as one wire or group of wires, insulated or uninsulated, that constitutes one of those paths for one or more signals.

Now we can get to those significant factors:  Everybody - "true-believers" and "trolls", alike -- believes that three of the electrical factors that are important in determining cable performance are resistance (R), capacitance (C), and inductance (L). One of those factors, resistance, depends only on what a cable's conductors are made of, and how much of it (or, if more than one conductive material is used, how much of all of them,) is used. The remaining two are interdependent and, together, provide conclusive proof that there are more than just three factors to cable performance, and that a cable's geometry is definitely one of them.

As just one example of how a cable's "geometry" influences its performance, consider that BOTH of the remaining two electrical factors, capacitance and inductance, are directly determined by how far apart the cable's conductors are from each other - the closer they are, the more capacitance, and the farther they are apart, the more inductance.

Hmmm... So even if the people who insist that it's all R and C and L are correct, they're still wrong, because the cable's geometry influences C and L? Hmmm.... 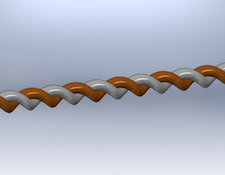 And here's another one - just a simple question, but an important one: How does it come to pass that those conductors get to be, and stay, whatever distance they are apart?   Although it's certainly possible that (as I've actually seen done for phono cables) the two conductors (in these illustrations, I'm always going to assume just two) are bare wires, held apart by spacers placed at regular intervals, the overwhelmingly more likely answer is simply that both wires are insulated, and that the space between them can be no less than the total thickness of the two layers of insulation.

That, of course, still leaves open the question of what determines their maximum spacing, and there, again, is where construction geometry comes in: In every case that I know of, the conductors will either be twisted together, wrapped around some kind of core, or held in position by either shielding or a protective outer jacket.

And that brings up other effects of the cable's geometry.  For one thing, the thickness of the insulation (and the material that it's made of) will not only play a part in determining the capacitance and inductance of the cable, but will determine (by the total volume of material times its dielectric constant) the amount of energy that the cable's insulation (its dielectric) will be able to store for later release into the signal path (capacitive discharge effects). And, if the insulated conductors are twisted together (if they're going to be twisted together, they  have to be insulated or they will "short out" wherever they touch) just the twisting - again, part of the cable's construction geometry - will provide a "shielding effect" against outside electromagnetic influences and crosstalk from adjacent pairs or outside sources and limit electromagnetic inductance.

Similarly, if the conductors are wrapped around a core, it's possible that this could increase inductive effects or even act as an electromagnet -- in either case, having a potentially significant effect on the signal they carry. 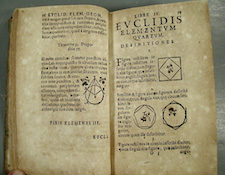 One more effect of wrapping the conductor elements around a core is that, by doing so the designer can use a large number of small diameter wires to create, in effect, a very large (AWG) conductor that still, it's claimed, if the individual wires are laid-onto the core only one wire thick, will suffer little or no "skin-effect" phase shift.

There are still other effects, both positive and negative, that can result from a cable's construction geometry, but it's not necessary to go into all of them here. The one point that that I did want to make in this article was to show you that cable performance depends on far more than just R, C, and L, and  that cable "geometry", whether Euclid would recognize it or not, is fully as important as any of those other, perhaps better known, considerations.

I'll have more weird and wonderful things about cables to tell you about next time.