I wrote in a recent article that "...no less a light than Dick Olsher -- a former Stereophile writer and a physicist in real life -- confirms that the transmitted signal moves vastly more quickly than the electrons that supposedly carry it, by a goodly number of orders of magnitude..." and that, if that's the case, "... then not only the wires, but actually the electrons that we are accustomed to think in terms of, assume an entirely new relationship to the signal..." To confirm that my memory was correct I, just a few days ago, contacted Mr. (or should it be Dr.?) Olsher to ask him for the specifics. 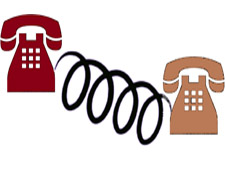 He very graciously wrote back that "I don't recall what I may have stated years ago, but revisiting the subject recently I find that that the electron drift velocity [Note: That's the actual "physical" movement of the electrons] in an 18-gauge copper conductor and a current of 1 amp is about 0.1 millimeter per second. The drift velocity is proportional to current, so it would be reduced at lower currents."

So what does that mean? Well, very simply, it means that we've all been grossly and perhaps even maliciously deceived for all these years. Ever since 1876 (the year that the telephone was invented), we've been told that what happens in any kind of electrical signal transmission is that electrons flow through wires to get to their destination and deliver their message. In the case of the telephone, we've even intricately crisscrossed our great country with well over one-and-a-half-BILLION miles of expensive and, because of the poles that it's often strung from, often unsightly wire.

That's right, for our phone call to get from California to New York -- just one way, not even counting any time for getting the first "Hello", let alone any actual conversation back to us, would require just a hair under1,531 YEARS! It's true; more than one-and-a-half millennia! So what's going on here?

The key to it all is that one-and-a-half (does the number sound familiar?) billion miles of wire I mentioned earlier: Wire is another word for ... cable! Now is it all starting to fall into place? Quite obviously thousands of years is impossible for a single phone conversation, but doesn't it make for a wonderful excuse for selling cables? Yup, the whole so-called "telephone" thing is a fraud, foisted on a foolish government and an unwary public by the cable industry, who were, apparently, no more scrupulous then than they are now.

Even so, "telephone" conversations DO happen, and don't require millennia to complete, and that's the key to finally solving this ever-so-knotty problem: We just proved that passing a signal by pushing electrons through a wire through a wire is, at the very least, impractical, but wireless signal transmission is now, and always has been, instantaneous. Can it be that David Edward Hughes or Heinrich Rudolf Hertz or one of their earlier colleagues, and NOT Marconi actually invented radio? Can it be that radio, like so many other things (the automobile engine that runs on water, for example) was suppressed or held in secrecy for some period of time in order to protect certain economic interests? Can it be that it was actually radio, instead of the telephone that was secretly used to make all those otherwise impossible calls and bilk the public while, also secretly, lining the pockets of AT&T and the cable manufacturers? Are, Monster, Audioquest, Transparent, MIT, Nordost, Skogrand, and all the others not really competitors at all, but members of a secret "cabal" (see? Even the word is suspicious) that actually rules the world?

Editor's Note: This column was originally slated to run yesterday but for various reasons we had to bump it back a day.