The Revenge of Merry Metal Madness 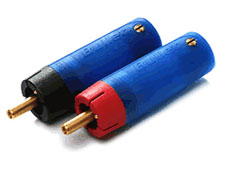 However, because of its magnetic nature, that nickel layer is, in my opinion, unsuitable for high-end audio, video and digital applications; I never used it in any connector I designed for XLO. After all that, I commented that, although reduced connector conductivity is a fact, I didn't think that it was of major consequence because the resistance of any cable, with any connector, could be reduced by simply using a shorter cable. I concluded, "...the real determining factor in a connector (other than, of course, magnetic effects and the dielectric material used) is something else, entirely..." and said that "I'll write about it next time."

Well, here we are at "next time," and I'm going to do just that.

For more than 25 years, I've been saying and writing that the ideal connector would have the greatest possible contact (surface) area and the least possible mass. All a connector is, in fact, is a (temporary) artificial continuance of one or more wires to allow the passage of signal information. The ideal connector, therefore, under that definition, would simply be a merging or "growing together" of the wire to be connected and wire to which it's supposed to be connected, with no intervening connector at all. In fact, in the process of wire-making, when there's a break in the wire or more wire is to be added to an existing spool, the two ends of the wires (the broken halves or the ends of the existing spool and the wire to be added) are simply butted together and welded, with no "knot," no solder or other added binding material, and no connector. What that gives is, in fact, 100% surface-to-surface contact and zero added connecting mass -- the ideal connector.

The reason for the maximum surface area requirement should be obvious: The greater the area for the transfer of energy, the lower the effect of resistance at any given point. What's less obvious is the reason for minimum mass, and that has to do with self-inductance and the creation and effects of eddy currents.

Any time a current is run through any conductor, an electromagnetic field forms around that conductor in a direction determined by the direction of current flow. When, for any reason, the current flow stops or reverses direction (as in an AC current of any kind, including a music signal) that field collapses and its collapse induces a current flow in any conductor within the collapsing field. Because, due to the Inverse Square Rule, the field extends to infinity, just decreasing by the inverse square of the increasing distance from its source, every conductor in the universe is within the field, but the conductor most affected by the collapsing field will always be the one at the very center, which carried the original current flow and around which the field originally formed. That's self-inductance -- the collapse of a field around a conductor inducing current-flow within the conductor itself. (In a pair of conductors, each carrying current and each having its field collapse and induce current flow in the other, it's called mutual inductance.)

Whether the induced current flow is the result of self- or mutual induction, it will always be of a polarity opposite that of any incoming current, which it will oppose or cancel. These opposing eddy currents create, and are themselves, the product of inductive reactance and can have a significant effect on signal transmission through the conductor. (They are, in fact, so effective that it's inductive reactance that's used as the primary low-pass filter in a passive crossover network to keep the high frequencies out of the woofer.) Less mass for their formation limits their propagation and the losses resultant from them. That's the major reason why many small laminations instead of a single solid core are used in high-performance transformers, and it's also the principal reason for keeping the in-circuit mass of a connector as low as possible. 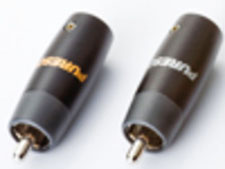 So what's the "in-circuit" mass of a connector? It's the total mass of every part of either ("hot" or ground) side of the signal path through the connector that's in electrical contact with the signal. If the shell of the connector is metallic, for example, and it's not insulated from the ground ring of an RCA connector, it's part of the in-circuit mass. That's why, when I owned XLO, every one of its aluminum connector shells was anodized (anodizing is a quite thoroughly effective insulator) to keep it from making electrical contact with the rest of the connector. It's also why even some of the very best cable companies are changing over to plastic or other non-conductive connector shells, even despite their potential cosmetic disadvantage.

A lot of connector manufacturers have apparently not yet figured out this mass issue out and, either for that or some reason of "perceived value" (if it weighs a lot it must be [check one]: ___ good, ___ expensive), they still persist in building massive, often "locking-style" (like WBT or DH Labs) RCA plugs. (NOTE: These have other problems, too, like the fact that if tightened too vigorously, they can destroy the RCA jacks they're plugged into, and void some electronics manufacturers' warranty in the process.) Fortunately there are other companies out there that, for whatever reason DO make minimum-mass connectors. Two that I know of are Eichmann (Eichmann Technologies of Australia), with their low-mass, low contact area "Bullet Plug" (gold-plated tellurium copper "hot" and ground pins) and the Taiwanese firm, Puresonic (Puresonic Electric Mfg. Co. Ltd.), who make, among other things, both low mass, low contact area (Gold plated tellurium copper pin and beryllium-copper ground contact), and low mass HIGH contact area (yeah!) RCA plugs of the same materials and the same outstanding quality.

IMHO, if you're shopping for new cables or thinking of re-terminating the ones you have, connectors of these styles are the way to go. Or, if your cables are XLO, you already have a low mass, high contact area design, and no change is necessary.

After all of this on RCA connectors, I think the subject is pretty well exhausted -- except for just one more thing that I'll write about next time.