The Curse of Merry Metal Madness

In the last installment of this far-longer-running-than-I-expected series, I wrote about self- and mutual inductance; about eddy currents; and, because of the effects of these things, about the need (in my not necessarily humble opinion) for minimum-mass, maximum-contact-area connectors. I mentioned, in line with that, that the ideal connector would be, as wire manufacturers use, no connector at all, but simply an end-to-end butt weld which would make for 100% contact along all available surfaces with zero additional connecting mass. And I mentioned that there are at least two brands of low mass RCA connectors on the market, one, the Eichmann "Bullet Plug" from Australia, offering low mass with, as its makers prefer, low contact area, and the other, from Puresonic Electric Mfg. Co. of Taiwan, which comes in two versions to provide your choice of either low-mass, low contact area, Eichmann-style, or low-mass, HIGH contact area, as I prefer. 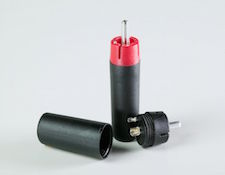 I ended that last article by saying that there was just one thing about RCA connectors left for me to write about, and that I would do so next time. That "one thing" was, of course the choice of dielectric materials for use in connector construction, so here goes:

Any time you take any two conductors - the pin and the ground contact of an RCA connector, for example - and separate them by any non-conductor, you create a capacitor that will store energy or release it depending on changing conditions.

That energy will be stored in the dielectric -- the stuff filling the distance between the two conductors -- and the amount of energy that it can store will depend on just two things:  a) how much distance there is between the two conductors and what that distance is filled with, and b) the dielectric constant of the filling material. That material can be anything at all, from a perfect vacuum to plastic, to air, to oil, to cotton, to just about anything else you can name, as long as it's non-conductive. And its dielectric constant is simply a numerical statement of the amount of energy any given volume of that material can store as compared with the energy storage capability of an identical volume of hard vacuum.

When the signal flowing through the conductors is positive (+), the energy stored by the dielectric will be positive and when it's negative (-) the stored energy will be negative. In either case, although the stored energy WILL represent some loss of total signal energy, it won't be significant. When it can get significant, though, is when the polarity of the signal energy changes (as it does with a music signal some thousands of times per second). That change of polarity causes the stored energy in the dielectric to be dumped back into the signal path OUT-OF-PHASE with the incoming signal, which (as capacitive reactance) it will block or cancel some portion of; or, if the stored energy is greater than what's coming in, actually create out-of-phase capacitive discharge artifacts that will become a part of what we hear. 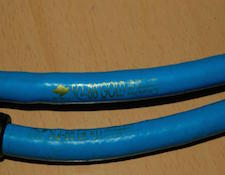 There's another thing that's important, too, in determining how the release of stored energy back into the signal path will affect what we hear, and that's the "dump rate" of the dielectric material. The fact of it is that that different dielectric materials release stored energy at different rates - anything from a true near-instantaneous "dump" to just a slow trickle over a quick, but still much longer period of time -- and the longer the release takes, the more of the incoming signal it will affect and the more likely it is to be audible.

As it happens, dielectric constant and dump rate tend to be loosely, but not directly related, so that a low dielectric constant material like Teflon® will also tend to have a high (fast) dump rate. Even so, there are many varieties of Teflon® or Teflon-like materials and, although they all tend to be close in dielectric constant (in the range of 2.0 to 2.6), as do other preferred dielectric materials like Polyethylene, Surlyn® and Elvax® (2.2 to 2.6) and foamed versions of them (1.65 to 1.9),  their variations in dump rate are in every case much greater.

Of all of the possible dielectric materials for a connector, the very best, both in dielectric constant and in dump rate would be a total vacuum, but nobody - at least that I know of -- has yet figured out a way to build connectors using it. Air would be the next best bet, and, more than twenty years ago, when XLO was first getting started, there was an "air dielectric" RCA connector, and that was what we used. Other than just two very thin discs of phenolic plastic, the original Mogami (male) RCA connector had nothing but air as its dielectric, and was without doubt the best connector of its kind at the time. Unfortunately, it, too, had its problems: It was expensive; disassembly and reassembly (to wire it in) was difficult; and it had a good deal of in-circuit metal mass. Ultimately, Mogami discontinued it and Mogami's U.S. distributor, Marshall Electronics, tried to have it made in China, but quality control problems caused them to finally discontinue it, too. That was when XLO started designing its own connectors, and, for all of them (except our proprietary XLR connectors, of which perhaps more in another installment) we used one or another variety of Teflon®, which, of all the commercially available plastic dielectric materials, has both the very best dielectric constant and the very best dump rate.

Of course, there are other things that can be used as the dielectric for connectors: Among them is cardboard, which was the original dielectric material for the very first "tulip" RCA males. I couldn't find a specific dielectric constant for (solid, non-corrugated) cardboard on the internet, but, it seems to be just a kind of very thick paper, and the dielectric constant range for paper is shown on Google as being 1.5 to 3.0. If that's really the case, consider this: Those original RCA connectors, with a hollow pin and a stamped, "tulip-shaped" ground ring (that you just soldered your shield or ground lead to the outside of), may have been both very low mass/ high contact area (as I recommended in the last installment of this series) and low dielectric constant, with a possibly high dump rate, as I'm recommending now.

Hmmmmm... Maybe the tube and horn Crazies are right in their love of things past. Maybe we should go back to old RCAs, too.