Comparing Audio Cables to No Cable at All

Sunday, on the last day of the 2015 Rocky Mountain Audio Fest, I attended a 9:00 AM presentation by David Salz, the designer of Wireworld cables, titled "Audio Cable Polygraph." The presentation began with the questions - "All else being equal, which has higher fidelity, a long cable or a short cable?" The answer was, of course, a short cable. Salz's second question was "What has higher fidelity than a short cable? The answer was "no cable at all." While this may seem, at first, to be simply common sense, how many audiophiles (or cable manufacturers) actually compare cables to no cable? 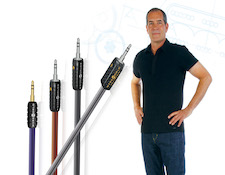 To demonstrate the sonic differences between cable and no cable David Salz assembled a test/demo system consisting of Triad CR2's modified by adding legs and amp shelves. The source was a Bryston BDP-1 playing 24/96 files from a USB thumb drive into a Bel Canto DAC3.7. The mono power amps were the Bel Canto Reference 500Ms and the system was powered by a Torus line conditioner. The amps and speakers were situated so that a solid metal spade to banana connection could be substituted for speaker cable.

The first speaker cable comparison was between a direct connection and a 10-foot pair of 14-gauge zip cord. The Zip cord cable was used in two configurations - one with the cord conductors split apart while the other was connected normally. The cable sounded noticeably duller and less full-range than the solid metal connection. Also the split cable sounded even duller and more lifeless than the other version. According to David Salz the reason for this is that "Tonal coloration and dynamics of cables are controlled by the electromagnetic field that actually moves the signal through the cable. The split cable loses more music because the increased distance between the conductors weakens the field, making it less effective at moving the signal. Of course, what we want is the strongest, most effective field, so all of the musical details and dynamics can get through."

The next test compared two 10 foot-long pairs Wireworld speaker cables to the reference connection. Salz began with the direct connection, then Mini Eclipse 7($570 MSRP), then Eclipse 7, ($1,800 MSRP). In this test the direct connection was the most neutral, followed closely by the Eclipse cable. According to Salz, "In testing we've found the most common effect of cables was added brightness in some portion of the upper midrange to mid treble. Depending upon where it appears in the spectrum, this effect can add midrange presence or increase the apparent height and width of the stereo image. These colorations were caused by phase shift from the electromagnetic field. Above this added brightness region, cables sound rolled off. A similar effect takes place in the low frequency range, with most cables accentuating a portion of the mid bass to upper bass and rolling off the lowest frequencies. This effect reduces pitch definition and dynamic expression, but it can sometimes add weight to the sound of a lean system." 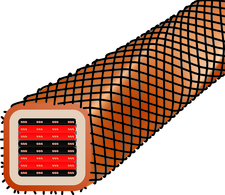 Salz also had an explanation for why some audiophiles find improved sonics by lifting their cables off the floor, "It's interesting that the sound of some speaker cables can change when they're lifted off the floor. What those changes mean, is that the cable is generating noise. Many cables are shielded from electromagnetic noise, but few are designed to avoid noise created by static charges within the cable. This is called triboelectric noise and it's the reason that guitar cables create sound through the amplifier when they're touched. It also turns out that the various colorations we hear from cable insulation materials are caused by differences in the noise they add to the music."

Obviously the demos during the RMAF presentation were "sighted" demos where we all knew what wire we were listening to, but Salz also has been conducting "blind" tests of interconnect cables for many years using his own patented device, which he developed in the 1990's. I used one for some tests when it was first introduced and found it to be a highly revealing and incredibly useful device for interconnect comparisons since they can be conducted by one person and still be blind. 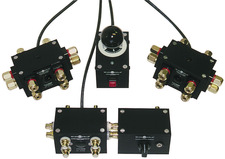 What was my takeaway from David Salz's presentation? I'm going to try out some of Wireworld's current production cable, since the only Wireworld cable I have heard in my systems was at least ten years old. Also I would like to borrow one of Wireworld Interconnect Comparators and conduct some of my own tests. While we can debate as to whether a direct connection is or is not the most neutral and transparent way to get an audio signal from point A to point B, using it as a base performance level for a control when comparing cabling is certainly a more repeatable approach than an A/B comparison methodology. And it naturally begs the question of why doesn't every cable manufacturer do similar tests? Why indeed...