Last time, in this continuing series on weird stuff about cables, I wrote about a specific problem with RCA connectors (the "hot" pin making contact first and breaking contact last); the fact that it could blow speakers, fuses or even electronic components if the connections weren't properly made (with the equipment turned off or its selector switch turned to a different input); and the fact that Neutrik had developed a special RCA connector specifically to solve it -- the Profi. 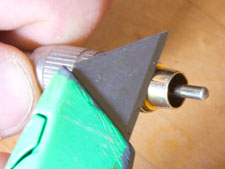 I also said that, although it apparently does what it's supposed to do in terms of preventing expensive accidents, the way the Profi connector is constructed could also, just in itself, create new problems all of its own, of excess resistance and possible magnetism. Those problems, I said -- if they existed -- had to do with the spring that was necessary to the Profi's design, and I went on to say that there was another thing that could also reduce a connector's conductivity -- the plating on its contacts.

The great majority of male connectors intended for the hi-fi market are made out of one of several varieties of brass or copper. (Or even, as my former company XLO used, exotic alloys like tellurium copper and others, equally exotic, from specialty companies like Brush-Wellman [now Materion]). All of these work, to a greater or lesser degree, but all of them -- even the fancy expensive stuff -- have lower IACS conductivity ratings (anywhere from about 15% to about 93%) than the 100% or greater IACS rating of even the most ordinary ETP copper.

They also all have a tendency -- more or less, depending on the alloy -- to oxidize, and the oxides can be even worse conductors than the metals themselves. To avoid that, connectors are almost always plated with some other material, which won't oxidize or corrode, and that gets us to Weird Thing #1 for today's installment: Although none of the plating materials that are commonly used for connectors is as good a conductor as the wires the connectors will be attached to, at least some of the plating materials more commonly used are actually more conductive than the metals they're plated on.

"Free-cutting" brass (C36000), the most commonly used material for making connectors, has an IACS conductivity rating of just 26%, while gold, the most commonly used plating material for hi-fi connectors, is rated at 76%, nearly three times as great. Rhodium, another popular plating material for high-end audio cables, although significantly less conductive than gold at an IACS rating of only 39%, is still a full 50% more conductive than the brass it will likely be plated on. Silver would offer the highest conductivity of all, at 106% IACS, but, even though it IS used for plating in some very specialized applications, the fact that it, like the other substrate materials, is easily corroded (tarnished, in this case, rather than oxidized) and would need a protective coating of its own, keeps it from being more commonly used. Where it is used, the protective coating most often applied is rhodium. Other common plating materials -- nickel, cadmium, and chromium -- are slightly less conductive than free-cutting brass, at 24%, 25%, 24.63%, respectively, and platinum, which some may use for "bragging rights" or cosmetic appeal, has the disappointing IACS conductivity rating of only 17.5% or less. (Here's a full table of conductivity and resistivity ratings for many common materials.)

Where all of this gets interesting is in Weird Thing #2: The ordinary plating processes used were developed for jewelry or other applications; usually involve nickel; and may not be optimal for high-end audio. Gold is ordinarily plated over nickel to make for a brighter, shinier finish. Similarly, rhodium is normally applied to silver or a sterling silver surface only after a protective layer of nickel has been applied to prevent the silver and the copper in the sterling from contaminating the rhodium. While the bright finish produced is desirable for jewelry or other cosmetic purposes, the presence of nickel allows for the possibility of residual magnetism affecting audio or digital signal transmission, and I would certainly avoid it. In fact, I did avoid it when designing connectors for XLO. All connectors ever used for any XLO cable were "direct" gold-plated, with no intervening nickel layer, and, for our speaker cables, we even offered 99.99% pure copper terminals with no plating of any kind. I don't have conclusive supporting evidence, but I suspect that where rhodium plating is used by other manufacturers, it, too, is applied without a nickel layer, and their male connectors are therefore rhodium over silver over brass.

For female connectors of every kind, the same kind of plating considerations also apply, except that, for female connectors some degree of "spring-effect" is often required for effective clamping and the substrate materials may therefore be different, ranging anywhere from steel to one of the exotic beryllium or phosphor bronze alloys and subject, therefore, to the same considerations that I wrote about for springs in the previous installment of this continuing article.

As I also wrote in that last article, Enid Lumley, one of the most intellectually curious -- and certainly the most colorful and controversial -- of the reviewers for The Absolute Sound, wrote, probably more than 25 years ago, that by carefully scraping the plating off of the connectors on the cables in her system she was able to hear a distinct improvement in sound quality. That might simply have been her imagination -- the deadly "placebo effect" against which we have all so often been warned -- or something as equally simple as that scraping the connectors scraped off not only the plating but some invisible but sound-spoiling layer of dirt or corrosion. It may also have been some tiny lessening of resistance or some other effect, entirely. I wasn't there and I don't know.

What I do know is that it probably wasn't anything having to do with resistance or conductivity, its other half: In the first place, the resistance of even the worst functioning connector is just not that great, and secondly, if you want half the resistance, you can generally achieve it just by using a cable (sort of) half as long.

Instead, I think that the real determining factor in a connector (other than, of course, magnetic effects and the dielectric material used) is something else, entirely, and I'll write about it next time.