In the ultimate analysis, all a cable really is is a thing to get signal from one place to another. That's its only function. Of course, as with any other purely transportive function (a school bus or a moving van, for example), you want it to carry all that you put into it all the distance to its destination, with nothing added (Who's this kid?), nothing subtracted (Where's my couch?) and nothing changed or broken (OMG, will you look what they did to my priceless Ming vase!). In general, the transportation part is reasonably easy and there are a number of ways that it can be accomplished. It's the "no more, no less, no-changes" part that's the problem. 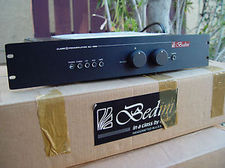 Historically, for hi-fi system use, cables - pieces of metal wrapped in plastic and paired and arrayed to be able to complete an electrical circuit - have been the most common choice for getting signal from one component to another or, at the end of the line, to get signal from the amplifier to the speakers. They're not the only choice, however. Wireless has been tried before and is again seeing growing popularity and there are a number of other options, as well

One of the very well-established alternatives to sending electrical signals through wire is to convert the signal from electricity to light and to pass that through either a glass (AT&T) or a plastic (Toslink) optical "cable", for reconversion to electricity at the other end.  Does it work? Absolutely, and it's been hugely successful in the communications field for transporting VAST numbers of signals over tremendous distances. It also avoids entirely (at least for the time that the signal is passed as light) that whole issue of RCL (Resistance, Capacitance, and Inductance) which has been the source of so much controversy between trolls and cable aficionados.

Although there can, at least theoretically, be problems with the different diameters and refractive indices of glass and plastic carriers, the real problem with optical signal transmission is generally not the transmission, itself, but lies (mostly) in the process and the equipment: Whenever anything is converted from one kind of thing to another, the opportunity is created for just the kinds of additions, subtractions, or changes that we want to avoid. And the same thing happens again, when you try to convert back. Even with the very best (AT&T) home optical conversion, you still run the risk of imperfect conversion from an electrical signal to light, and you do exactly the same thing - just in the opposite direction - when you try to convert your light signal back to electricity. 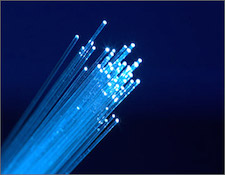 During the brief heyday of optically-transmitted High-End audio (pushing two decades ago) the AT&T system was usually considered to be the better-sounding of the two available optical systems. It was also by far the more expensive: At the time, the industry cost for just the pair of transducers necessary for AT&T electricity-to-light-to-electricity conversion was (if my memory serves me correctly) something in the range of US$275. When you consider that Toshiba, in developing the "Toslink" (short for Toshiba-link?) system had to come up with transducers that could be put into complete CD players and receivers that sold for as little as US$150 each, it's easy to understand why Toshiba may have had to make certain compromises, and why Toslink sound-quality was never as highly regarded as that of its competition. Either way, however and for whatever reason, most High End audiophiles continued to prefer the sound of an unconverted electrical signal played through a high-performance digital cable over either of the competing optical systems.

Another approach taken at one point, by at least one element of the High-End audio community, was the "Bedini Box", designed and produced by John Bedini, manufacturer of some of the very finest electronics of their day. Bedini was a serious devotee of Nicola Tesla - among other things, the designer/developer of the AC power system that supplies our home electricity.  An amazing man; and at least the equal of Thomas Edison, of whom he was the greatest rival, Tesla had a number of other (and sometimes very strange) things that he was working on at the time of his death - including wireless broadcast power. Bedini followed-up on several of those things, eventually producing a home power system that would use a single 12 Volt car battery to "unlock the power of the universe", and that was said by people who saw it (I know some of them and I believe that they believe what they told me) to be able to run two hundred 100 Watt electric light bulbs for at least a great many hours without the need either for any additional power or to re-charge the battery. 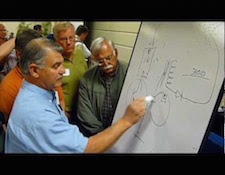 In a very famous demonstration at the Riviera Hotel in Las Vegas during CES one year, Bedini was sharing a room with Brian Cheney's VMPS-brand loudspeakers, driving them at hellacious volume off a Bedini amplifier fitted with Bedini speaker "output boxes", running 30AWG (tiny) insulated hook-up wires to Bedini speaker "input boxes" attached to the speakers. According to Bedini, what the boxes (one pair for each channel) did was to route the power of the amplifier from the output box through hyperspace to the input box, which drove the speaker, BYPASSING THE CABLE AND "NORMAL" SPACE, ENTIRELY.  Again according to Bedini, the only purpose of the tiny 30 gauge wire was to "act as a road map" so that the amplifier's power, once in hyperspace, could "know" where to re-emerge into normal space to drive the speaker, and Bedini said that the wire carried no current at all.

At one point during the Show, an unbeliever - probably one of the visiting Hi-Fi dealers - accused John Bedini of being a fraud and said that the whole demonstration was faked.  Bedini was mightily upset, but unlike a previous CES where he had actually gotten into a fist fight with Mike Petroff, a speaker manufacturer with whom he was then sharing a room, he, instead made a bet with the challenger that he could prove that all was on the up-and-up, and once the challenger had agreed (The amount was, if I remember, $100), he turned off the system, leaving the (VERY HIGH) volume settings in place, and had the challenger remove the Bedini boxes at both ends and re-connect just the 30 gauge hookup wire. When the system was turned back on, proving his point beyond any doubt, the hookup wires immediately glowed bright red, burned off their insulation, and burned their way deep into the hotel's carpeting. 'Nuff said!

I have no idea at all of whether John Bedini's explanation of what his boxes did or how they worked was true. I only know that, when I think about it, I can still smell the stink of burning carpeting. As to the Bedini boxes? Well, they went out of production shortly after the disappearance of John Bedini some while later. Some said he was killed by the electric power Establishment; some said abducted by aliens; no one really knows for sure.

What I do know is that there's more to this story about why we're still using cables, and that I'll tell at least some of it to you next time.