Audio, Exotic Materials, and You - Part 9

The whole purpose of this continuing series about exotic materials used in our High-End audio gear has been, after introducing them and telling you a little about the advantages they claim to offer, to tell you whether I think they do as they say; if so, to tell you how they do it; and, if how they actually do what they do seems not to be in keeping with the common explanation for it, to try to either give you an alternative explanation or simply to say that, in my opinion, no good explanation seems to exist. 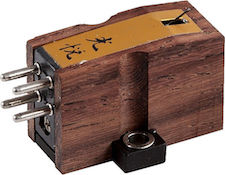 After having spent some time on the appearance factors of materials and considerably more on the electrical characteristics, production and crystal structure of the metals we use, in the last installment of this series, I started to explore another factor that affects the performance of our Systems, the ability of materials to affect motion - either by facilitating or restricting it - or by their natural resonance characteristics.

One example I gave last time ― the diamond cantilever used in many Dynavector phono cartridges ― was specifically mentioned because its great rigidity helps to prevent cantilever flexure and the loss of recorded information that results from it. Beryllium and Boron were also mentioned as having been used by phono cartridge manufacturers for that same purpose, as was making cantilevers very short or of tubular and/or tapered or multi-diameter design. What wasn't mentioned was that all of those materials and construction approaches affected not only the motion control that was mentioned, but also had a strong effect on the other side of the motion "coin" - resonance. 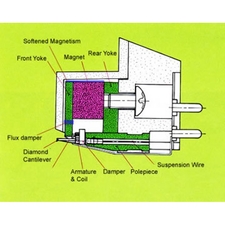 Everything, whether in nature or man-made, has a natural resonance frequency (a "fundamental" resonance) at which it will vibrate when a stimulus - the right form of physical energy - is applied to it. That "application" may be by poking it, hitting it with a hammer (as a piano's hammers "stimulate" its strings or a drumstick "stimulates" a drum), talking, singing, or yelling at it (as a voice "stimulates" a microphone) or just about anything else that results in external physical energy being added to the object in question and causing it to vibrate. What that resonant frequency is will depend on what the object is made of; how big it is; whether it's free-standing or in contact with something else (and, if so, the specifics for the "something else", too) and a host of other factors, and, in one way or another, it may very well affect the sound of our systems.

Generally, the smaller or harder a thing is, the higher its resonant frequency will be and the softer or bigger it the lower that frequency will be, but that's not always the case. For example, one fairly typical 15 inch woofer  from a very major manufacturer  has a free air cone resonance frequency of 40 Hz  while an also fairly typical 8 inch woofer from the same manufacturer has a lower free air cone resonance of only 29.6 Hz. Even though the overall design is similar, and even though - all other things being equal --  it would be reasonable to expect the larger object to have the lower resonant frequency, the fact of it is that all things are NOT equal, and while some portion of the difference may be attributable to design differences ("softer" spider or surround; proportionally thicker or heavier cone, etc.), different materials could also be part of the reason.

In audio gear, when they're not being used for either strength, rigidity, electrical conductivity or insulation, appearance, or the addition of perceived value, exotic materials may very well be used to give improved resonance characteristics to the products we buy. That may be a reason why Koetsu chose rosewood as the "shell" material for one of its most famous cartridges, or why Kiseki chose lapis lazuli - a semi-precious gemstone - for one of its own. In an object as small and as critical in its function as a phono cartridge, controlling not only the degree (amplitude) but also the frequency of resonance may be crucial, and a change of materials may be the easiest way to accomplish it.

Or it may be nothing more than a way to sell more cartridges or to sell them at a higher price. The gold plating of the Goldmund cube amplifiers that were designed to directly plug in to Goldmund's very expensive (and recently resurrected at an even higher price) Apologue speakers had an initial base price of US$25,000 back in the 1980s when they first came out, but that price was NOT fixed - instead, it varied with the "market" price of gold, just as the price of lobster on a fancy restaurant's menu varies with the market price of lobster at the wholesalers. The difference, of course, is that 100% of a lobster is made of lobster, whereas only some much smaller percentage of a Goldmund cube amplifier is made of gold, but nonetheless goes up, just as the gold part does when gold prices increase.

Don't get the wrong idea, though, exotic materials CAN be worth every penny of their additional cost in improved performance. Even the most closed-minded Troll has to admit that Teflon wire insulation has advantages in dielectric constant, insulation strength, longevity, and resistance to solvents and the elements, that justify its increased cost over the more common insulating material, PVC, whether or not he accepts the idea that Teflon insulation will make it sound better. 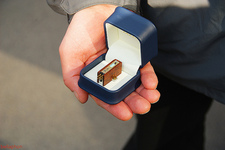 There are other things, though, that may just be exotic, and do nothing else at all to justify their added expense:  I remember, for example, a Japanese audiophile writing, in one of the social media, of his intent to craft loudspeaker horns from a particularly beautiful thousand-year-old cedar log he had acquired. Assuming that his craftsmanship is equal to his love for and commitment to his project, I'm certain that his horns will be a wonder and a glory! But will they sound any better than horns of the identical length and flare, made with similar devotion to quality, from some other material? I doubt it, and would imagine that any other material at all that had exactly the same resonance characteristics as that wonderful thousand-year-old cedar would sound exactly the same.

It all depends on what you want.  If those magnificent cedar horns and horns of some other material really do sound the same, you may say that that's all that matters. Or you may say that knowing of their material provenance and of the love that went into crafting them makes the ones of exotic material all that much better.

It's up to you. Do or buy exactly what pleases you.