A New Twist on Copper?

One of the things that salespeople and politicians seem to learn as a basic success tool is to always have and project a positive attitude. That means that if things go badly or even less well than planned -- if prices go up, if quality goes down, if anything at all happens or, if it was promised or hoped for but doesn't happen -- they have to be able to spin the facts so they can tell their customers or constituents that whatever it was was still a good thing and not a bad one. Sometimes they must do this with little or no advance notice. 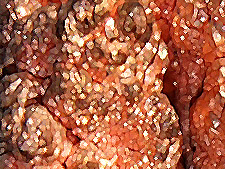 Having that ability gives them a couple of really important advantages. One is that they never have to apologize.  All change, as they say it, is for the better, so there's never anything to apologize for. And the other advantage is that, if they can get people to believe that whatever the change is really IS for the better, they can, if the price goes up, justify charging more (or, if they're politicians, taxing more) for whatever they're offering. And if the price doesn't change, they can congratulate themselves and tell you what fine people they are for not charging or taxing more for better stuff.

What seems to be a perfect illustration of exactly this kind of positive attitude in action came to my attention just recently. If you've been following the continuing controversy over whether premium cables are any better-sounding than just ordinary ones of the same gross electrical characteristics (resistance, capacitance, inductance and characteristic impedance), you know that for at least the last 25 years, many premium cable manufacturers -- including me, while I was with XLO -- have been touting 99.9999% pure ("six nines") copper as the best available conductor material for use in high-performance audio and video cables. And if you've been following this series of articles, you know that I still believe that to be true, even though my continuing research has now led me to believe that that's more for reasons of crystal length than simply of greater purity.

Although it continues to be available from other sources, Furukawa Electric Co. of Japan, until recently one of the world's leading manufacturers of six nines copper, stopped accepting orders for it at the end of March 2013, and ceased all deliveries to customers at the end of December of that year. Low demand and extremely high manufacturing cost (due to the patented Ohno Continuous Casting process [PCOCC]) were given as the reasons for discontinuing production.

Following the loss of its (at least to that time) supply of PCOCC copper, one Japanese manufacturer (whose name I'll withhold) of all kinds of expensive audio bits and pieces is now offering cables made of what they claim to be a "new" kind of copper, in a "new" kind of construction -- neither of which appears to be in any way new, and at least one of which may actually be counter-productive of high performance.

I know that, as a cable designer, myself, there are those who might expect me to embrace silly, vacuous or outright false claims, but some of the things that company is saying about their new line are too much, even for me, so I have set forth below a few of their claims and my flash comments on them. Take a look and tell me what you think:

The company says that their new cables are made with the "Highest Quality Copper Ever." Unless they define what they mean by "quality" and what the word "highest" means in that particular context, there's no way -- either objectively or subjectively -- to know if they're telling the truth.

They say their cables employ "new advanced techniques never before applied to audio cable." Techniques of what? And how do we know that's true? If they're talking about having their cables passed through the intestines of civet cats like Kopi Luwak, a type of Indonesian coffee. Otherwise, just looking at the product information on their website, I don't see anything new; it's just giving a new name (do you remember "Gardol"?) to try to re-brand a perfectly ordinary old thing. Besides, if those techniques really have, as they claim, never before been applied to audio cables, maybe there's been good reason for that; I, personally, have never washed my car with whipped cream.

Another claim the company makes is of "proprietary design," both of the cables and of the conductors, but other than the fact that the conductors use a "patented" configuration of three different strand sizes so that they can get as much copper as possible into the smallest possible [stranded conductor] diameter, so what? The facts of basic cable design are that:

3) That because of the "tiny diodes" effect, stranded wire -- if the component strands have ANY surface oxidation at all (meaning if they've ever been exposed to the atmosphere at all) -- will always serve to rectify-out some amount of low-level signal information, so increasing the number of strands per conductor, even by a patented process, can actually be counter-productive and make things worse. Besides, "patented"? Patented where? Under what laws? Allowing what claims and requiring what proof? Even in the United States, a "design patent" doesn't indicate or protect anything other than just the fact that nobody's ever done that EXACT same design before, and doesn't indicate merit or lack thereof in any way.

They make a lot of other claims, too, including one that declares that a very precisely controlled "mechanical peeling" process done to the conductors "removes 100% of [their] impurities." Since this, if true, would result in a copper that would be not just "six nines," but an infinite number of nines pure, it seems safe to dismiss it as, at best, over-enthusiastic hyperbole, and not to give it any serious consideration at all.

Still other claims, though, do need to be examined and, where appropriate, countered. There's one, for example, that after the "peeling" process, test results for their "super" copper "...show an 'incredible' [quotes added] conductivity level of 102.3 % IACS." Oddly enough, I don't challenge that one at all. One article from the NDT (Non-Destructive Testing) Resource Center says specifically that -- even without being "super" -- "Wire of high purity has been produced having a conductivity of slightly over 103% IACS, which is very near the value expected for copper without any impurity."

Should that last bit of making a big deal out of nothing also be overlooked as just over-enthusiastic hyperbole? Or is a pattern starting to emerge? Here's one more item to consider.

One of the claims the company seems to regard as important (because they repeat it a number of times) is that their "super" copper, in order to eliminate "... any chance of legacy contamination and impurities..." is  made from "...only pure virgin copper that does not contain any recycled material."  Now, even if the copper they use is straight out of the ground and has never been used before and never recycled, so what? After the last billion or so years, certainly every drop of water on Earth has by now passed through at least one set of kidneys of some creature or another, or been a part of the metabolic cycle of at least one plant. The fact is that after use and the natural distillation of the rain-water cycle, it's as pure as any water has ever been. It's the same with the use of "virgin" copper. Here's what even the company has to say about it:  "While acceptable performance can be achieved with recycled copper, the extra effort required for using virgin copper produces not only a superior product but also a degree of pride, which comes from knowing we are using the purest possible approach. Even though assay testing reveals no quantitative difference between pure virgin and recycled C1011 copper, we felt that even the remotest possibility of contamination was unacceptable."

In short, they're saying, "It makes no difference, but it's a selling point that we could brag about to help our marketing efforts and maintain our price points."

I have no idea at all of the quality or performance of this company's products. Given their typically high prices, though, I hope that they are spectacularly good. And if that's the case, I would also hope that they would learn to let their products speak for themselves and stop making the kind of claims that politicians and salespeople might find necessary, but that make us ordinary people wonder about either the intelligence or the integrity of those who try to sell us things.