Readers who've enjoyed Steven Stone's audio writing may be distressed or encouraged to learn that he has, in actuality, been dead for more than three years. Stone passed away suddenly in late January 2011 after a brief illness following CES. 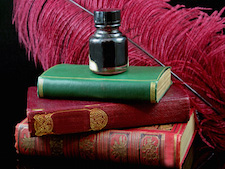 "I'd been editing Steven's articles ever since we got married, so when he died, I kept on editing, and then finishing his last articles." Over the years Ms. Thomas learned a lot about audio. "It had gotten to the point where I was making corrections not only for his writing style, not that he had much, but also his technical descriptions." Ms. Thomas went from writing real estate how-to's and romances to gear reviews for a variety of publications including The Absolute Sound, Home Theater Review, Vintage Guitar magazine and others.

As to whether revealing that she is NOT actually Steven Stone will have any negative effect on his brand Thomas said, "From comments I've received from my editors, they prefer the new Steven to the old one, so I think his brand has only gotten better."

For those critics who've called Steven Stone a d******d, Ms. Thomas said, "won't they be surprised to learn how far off the mark they really were..."