What Ukuleles Taught Me About Speakers

I used to collect ukuleles, but sold off one too many. All I had left was a Risa electric, but I really wanted an acoustic uke to mess around with. So last week I went to Pasadena, California shop The Fretted Frog to see what I could find. The experience didn't teach me much about ukes because I've already owned a zillion of them. But as I was driving home after I made my purchase, I realized that the process I went through to pick a uke is much the same as every audiophile should go through when selecting speakers -- and the process I should keep in mind as I confront the Thiel, Klipsch, GoldenEar and Sumiko speakers I currently have in for review in Audiophile Review's sister site, Home Theater Review. 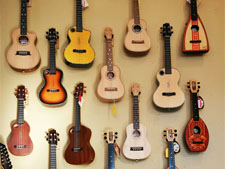 Simple as ukes may seem, they come in more shapes and sizes than most other acoustic stringed instruments. There are four basic sizes (soprano, concert, tenor and baritone) plus other variants; traditional shapes and oddball styles such as pineapple, pear and cigar boxes; four-, six- and eight-string versions; and models made from at least as wide a range of woods as acoustic guitars are. The problem for me is, to my ears most ukuleles have a constricted, choked sound that just doesn't "sing." So my usual process is to play the chord changes from "Satin Doll" plus the melody to "Scrapple From the Apple" on one uke, then proceed right to the next one. Then after I've tried a couple dozen of the most promising models, I get the four I like best (if I find that many) and do A-B comparisons.

What did this have to do with speakers? Stereo speakers are much like ukes in that there are innumerable variants. You can get huge tower speakers, small towers, bookshelf/stand-mounted speakers, or satellite speakers with a subwoofer. You can get them with built-in amps and/or built-in subwoofers. You can get conventional dynamic speakers, with cone and dome drivers, or you can get electrostatics, planar magnetics, horn speakers and more. You can get freestanding or in-wall models (even audiophile-grade in-wall models). You can get models using multiple drivers or a single driver.

Sure, there are lots of different amplifiers, DACs, turntables, etc., but the differences in sonic character among them are small compared to the differences among speakers. This is why choosing a speaker is such a personal expression of your tastes, just as choosing a ukulele is. You might prefer the clean sound and conservative engineering of, say, the Revel Performa F208. Or the big, spacious sound of the Magnepan MMGW. Or the retro vibe of the Tekton Design M-Lore. It's a decision you can get right only by hearing lots of speakers. Fortunately, the process is as much fun as choosing a ukulele; it's just more difficult because you have to travel to a lot more dealers.

What I realized as I was driving home was that as I review the speakers listed above, the most important thing is not for me to figure out what I like the best, but that I help the reader determine if the speaker under review is the kind of thing she or he would like the best, without giving my personal tastes veto power. 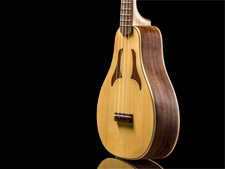 I would guess there were close to 100 ukuleles on display at The Fretted Frog, at prices ranging from about $50 to more than $1,000. Only one came home with me. For my taste, its big, full, free-breathing sound blew away everything else hanging from the store's wall. Obviously, though, almost all uke players will make a different choice. Many will pick ukes that I think kind of suck, and there's no doubt that a few of those ukes do pretty much suck. But there were at least 30 that, while they weren't the right choice for me, would likely be the perfect choice for an equally discerning yet different type of uke player.

In the same way, a speaker that doesn't excite me might make you much happier than my favorite speakers would. Of course, there are some speakers that aren't a particularly wise choice for anybody. But the fact that speakers are so different, and so personal, is what keeps me fascinated with them even after reviewing them for 25 years.