I was talking on the phone recently with a good friend of mine who, since the age of 15 has been recognized as one of the world's greatest recording and mastering engineers, and who, over at least the last 35 or so years has probably been the creative force behind many if not most of your favorite recordings. I'm not going to tell you his name because this could easily come off sounding like a commercial, which it's not intended to be. Instead, I'll just tell you that, in addition to working with many of the world's most famous performers to help them become what they are today, he has also designed and built much of the equipment he uses in his work, including what -- if he were ever to actually start commercially manufacturing them -- might very well be acclaimed as some of the best loudspeakers in the entire world, regardless of price. 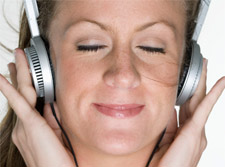 That's what two of the editors of two of what have been the most powerful audio enthusiast publications for the last several decades said when they heard them, and it's (finally getting to the subject) also what a popular female singer said of them just recently. My friend told me, in our phone conversation, that following a five-hour-straight session at his home during which she sat raptly listening to just about every kind of music imaginable on his speakers, she finally snapped out of it and described what she had heard as "...better than the best sex ever!"

According to my friend, she's not the only woman to be completely blown away by his speakers and not the first to show every sign of becoming a devoted audiophile after hearing them. He says that there's something about the sound of his speakers (it has to be the sound; their appearance is perfectly ordinary) that seems to appeal directly to the female consciousness, and that they may be the key to finally unlock a female audiophile market. But how can that be?

Back sometime in the late '80s or early '90s, Stereophile did a survey of its readership to find out exactly who was reading the magazine. I don't think anybody expected anything even approaching gender equality in the demographics -- we already knew that hi-fi was primarily a male avocation -- but when it turned out that only about one percent of the magazine's readers were of the gentler sex, we were all genuinely amazed. How could it possibly be that something both as yummy and as basic as good sound could have so little appeal to the ladies?

The first inkling I got of a possible answer to that question was at that year's (probably Chicago, but I'm not sure) CES, where I, Tom Miiller, Jack English, Michael Gindi and some of the other reviewers for Sounds Like... magazine got together after-hours and, over a drink or two, got into a serious discussion of the then-recent Stereophile findings. Although everybody had an opinion (don't we always?) as to why women have so little interest in hi-fi, English and Gindi -- both practicing psychologists in real life -- led the way with some interesting insights. One was the observation that, while men seem seldom to know the words of any song, women always do -- even, apparently, after just one hearing. Maybe, the discussion went, men and women listen to (meaning give their attention to) different things. Maybe men, when they hear a song, hear the sound or the rhythm or some other thing about the music, and women listen to the words. That would certainly explain why women would seem to know the words when men don't. It would also explain why women don't normally seem to care about the sound. If all they care about is the words, and the words will be exactly the same whether the song is played on a shirt-pocket radio or the very finest high-end system, to them there really may be no difference.

That was the conclusion we walked away with, and it seems as reasonable to me now as it did then. Women have always been said to be more emotional than men, and the words are certainly the most direct way to communicate emotion. And men are said to be more into the "nuts and bolts" of things: "How do they work?" instead of "How do they make me feel?" The sound and rhythm are certainly the foundation on which the music is built, so maybe it's true, and maybe that's why there are so few lady audiophiles.

On the other hand, maybe it's not true at all: Maybe instead of them being attracted to the words, there's something about the sound of most hi-fi systems -- some distortion, perhaps, in the music's upper registers -- that actively drives the ladies away.

It's long been known that women have significantly better high-frequency hearing than most men. Perhaps because they tend to be smaller than men, their eardrums are smaller and thinner than those of their male counterparts and can respond better to higher frequencies. Whatever the case, whenever I think of women and high frequencies, I'm reminded of an incident that happened just shortly after I started XLO:

XLO's factory was in Rancho Cucamonga, California, and that of Cardas, another cable company, was in Ontario, the next town over. Because we were effectively neighbors, when XLO started up, I called George Cardas to say hello and to tell him of our new business. He very graciously responded by inviting me to dinner at his home a few days later, and, impressed by his hospitality to a competitor, I gratefully accepted.

When I went, I met George in person for the first time, and I also met his wife, Darcy, and two of his daughters, Mary and Colleen. The dinner was wonderful, as was the conversation, but one of the things that happened while we ate was that while we ate (some kind of spectacular shrimp thing, as I recall) George asked me if I had any women to listen to my products. "You [paraphrased, of course, after all this time] should always do as I do, and have women listen to your stuff before you release it for sale," he said. "They hear better than we do, especially up in the highs." At which point, one of the ladies said, "We don't like highs," and another one said "Yes, they hurt our ears!"

Can this be the real reason why there are so few female audiophiles? Can there be something about the highs that drives them away? Can it be that there's something in the (radical new) design of my friend's speakers that corrects or simply doesn't have that problem? Will that usher-in a whole new age of Lady Hi-Fi Crazies? Or is it that women really do just listen to the words and, except for those few who have heard his speakers, don't care about the sound at all? Or could it be something else entirely?

I haven't got a clue. What do you think?