Recording a House Concert - Third Time Could Be A Charm

I have advocated on multiple occasions on these electronic pages that serious audiophiles should try making their own recordings. Occasionally I follow my own advice. This weekend I attempted to get a good recording of a live concert in a venue that has, in the past, given me trouble. And by trouble, I mean that I had not been able, in two tries, to get what I consider an acceptable recording from this space. 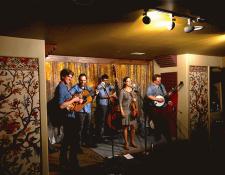 The venue is unique. Unlike the vast majority of house concerts that happen in someone's living room, this house concert is held in a room that has been dedicated to the purpose of holding house concerts. It has a raised stage, built-in sound reinforcement system, lights, and space to hold approximately sixty people.

In the past I tried two different methods of recording. First, I tried the purist technique of using one stereo pair of microphones situated front and center going directly to my mic pre and Korg MR-1000 recorder. The problem with this set-up was bleed from the PA system. As the sound got louder there was more bleed from the PA into the mics, which messed up the imaging, harmonic balance, and overall clarity of the music. Given the PA's SPL levels, there was no way to get this kind of a set-up to work in this particular room. Strike one...

The next time I recorded at the venue I used a stereo pair, but with the addition of the feed from the mixing board. This was a slightly better solution, but due to the nature of the mixing board, I could only get a mono feed, and again as the volume increased the sound got cloudier and less well-defined. Now the sound was OK until mid-levels and higher. Strike two... 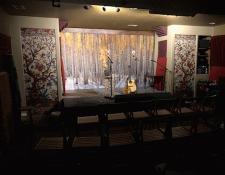 For my most recent tryst with the room I dumped the stereo pair and went for a pure mixing board feed. Since the last effort several important changes had been made to the room. The older analog Mackie mixing board had been replaced with a newer Mackie DL1608 wireless digital mixer. Also, the PA speakers were now isolated by a side wall from the main stage and set back into their own enclosed spaces on each side of the stage. In this configuration there wasn't nearly as much sonic spill from the PA onto the stage.

I downloaded and read through the DL1608's owner's manual and concluded that I could get a stereo feed from its AUX outputs via a pair of balanced TRS cables. The only hitch was I had to figure out how to get the Mackie iPad app to configure the system to do that. I was feeling lucky, so that's what I decided to try.

On the day of the concert I arrived with my gear around 4:45 for the 5:30 sound check. The initial set-up, based on the band, Masontown's, stage layout had the five members laid out so the mandolin player, Mike Canney, was on the extreme left side of the stage while the banjo player, Sam Armstrong-Zickfoose, was on the extreme right. The bass player, Bradley Moore, was dead center while the two lead vocalists, Eric Wiggs on guitar and Natalie Padilla on fiddle, were left and right of center. The band used three Ear Trumpet microphones as well as direct inputs for the mandolin, guitar, and bass using Grace Felix preamplifiers. 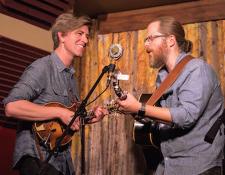 While the Mackie DL1608 is certainly a fully-featured mixing board, the same can't be said for their owner's manual. Although it referenced analog outputs via the AUX outputs, it gave no specific method to achieve that end. Three of us puzzled over the iPad's control surfaces, looking for a way to get the AUX feeds unmuted with no success. Once the band arrived, we spent the next half hour adding a front monitor, adding the Grace Felix preamps to the mix, and setting overall levels. With the new PA system we could get the front of house levels so they peaked around 90 dB while the back of house was mid 80's. After the band was set up and happy, we turned our attention to those recalcitrant AUX outputs.

Eric Wiggs, Masontown's guitar player, has a very fine home studio and some familiarity with the Mackie wireless mixer. I explained what I needed (a stereo feed from the board) and after a couple of minutes of hunting around he got the board set up so that I had two distinct channels. We could then use the pan controls to place each player across the soundstage in a position close to where they would be in reality. In essence we did a panned mono mix, similar to what you might do with a studio recording. While not "true" stereo, it can fool a listener. We did not add any room microphones, so the sound was close-mic'd without any additional room bloom or situational ambience added. 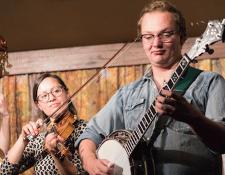 So how did it turn out? Remarkably well, actually. The only fly in the ointment was that on a few songs the combination of the Ear Trumpet microphones and the Mackie Mixer's mic preamps resulted in an occasional bit of "fur" on Eric Wiggs' lead vocals when he leaned into the mic during his loudest vocals...Unlike my Grace Lunatec microphone preamplifier which doesn't distort during slight overages, the Mackie's built-in mic preamps didn't accept additional loudness with the same level of ease.

You can hear what Masontown sound like via their single,  "The Last of My Kind" available on Spotify. As for my recording, Masontown will get a copy for their archives and I will use some of the tracks for reference listening. Perhaps I'll even bring a track or two to the next audio show I attend.

Making live on-location recording is a lot like trophy hunting. You do your research, outfit yourself as well as possible beforehand, but you never know what new problems you will have to deal with until you are actually in the middle of the experience. If you're skillful and lucky, you get to bring home a listenable trophy...