My Visit to the Songbirds Guitar Museum 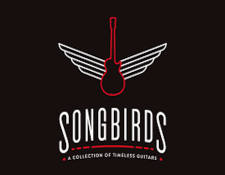 It was a wedding that recently took me to Chattanooga, TN and, on a rainy Saturday afternoon, found myself and four friends at the largest collection of rare guitars I must imagine anywhere.

With a 5:00 PM wedding, and what started out as a wet Saturday, my buddy Doug wanted to visit Songbirds, a rare guitar museum in Chattanooga. Doug both plays and collects guitars so seeing this museum was something he wanted to do. In fact, of the five of us visiting that day, three played and / or collected, two did neither. Yeah, I was one that did neither. In fact, I was, at first, not even interested in going but decided to hang with my buddies, leave the girls to themselves, and do something not wedding related.

Songbirds started out not as a museum but rather as the collection of one very wealthy individual. David Davidson, the museum's Chairman and curator is the public face of the entire operation. He started out twenty years or so earlier selling rare guitars in New York. 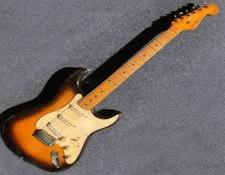 He had advertised a 1954 Fender Stratocaster on eBay for $25,000. To his great surprise, the buyer actually used a credit card to pay for it. Almost immediately, a lady called telling him she was the personal assistant for the buyer, and if Davidson found other rare guitars, please let him know. And so it began.

The owner of the museum is a multi-billionaire hedge fund manager who is also a collector of the world's rarest guitars. He owns all the guitars. He also prefers to stay anonymous and let Davidson be the face of the museum. What they have on display is, even to a non-player or collector like myself, pretty amazing. They rotate displays, like bass guitars, or guitars of the British invasion, or rock, jazz, country, and so on. There is little in the way of a guitar classification Songbirds does not in some way have a sample. 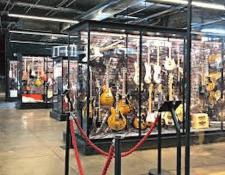 Songbirds consists of three parts, an outer area that may be toured for about $16.00, or an all access guided tour for about $39.00. Opting for all access allows entry into what they call the "Green Room" and where any visitor really wants to be, the "Vault." It is there the most rare and prized guitars are stored.

What I found amazing is the breadth of the collection. From a time frame perspective, they have and collect pieces from about 1920 to about 1970. And it's just not that they have a lot of guitars, it is what they have that is so amazing. Acoustic, electric, production, prototype, famous guitars, they pretty much have it all. From the 1931 Rickenbacker "Frying Pan" to Gretsch - even the original 1962 Champagne Sparkle Jet - to Gibson, Fender, well, a guitar enthusiast could be engrossed for hours with all there is to see.

Perhaps most amazing is the number of prototype guitars that never went into production. Many of these have some type of customization or a different looking color - like a 1971 Thinline Telecaster in Go Go Orange finish. Many were one of only several ever made. For instance, there is a 1969 Fender Stratocaster Solid Rosewood - only two were ever made, one was for Jimi Hendrix, the other one is in Songbirds collection. 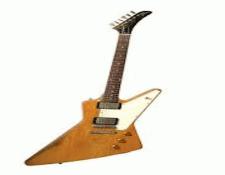 They have prototype guitars with tool marks still on them. Guitars that did not sell very well and were discontinued. All totaled, there are about 2000 guitars in the entire collection. The museum showcases about 500 to 600 at any one time. The remainder are housed off site in a highly secured, closely guarded secret location.

The entire collection, minus the building and property, is estimated in excess of $200,000,000.00. Yes, that's 200 million bucks. Probably the most expensive guitar is the 1958 Gibson Explorer. Only about fifty were ever made and Songbirds has one of the earliest models. It's valued at over one million dollars.

Our tour guide that rainy Saturday told us Songbirds was not just about guitars but the stories of those guitars. My favorite story was about Bertha and Esther Friedlich, twin sisters and guitarists in a little known, 1950's band called the Tweedledees. 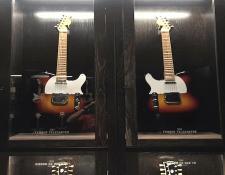 Despite being twins, one was left-handed, the other right. When they contacted Fender to purchase guitars, they bought left and right-handed 1958 Three Toned Sunburst Telecasters. Bertha, however, was not happy with her right-handed guitar and through some coaxing, eventually persuaded Leo Fender to customize hers so she could hold it better. Her guitar became the only Fender in existence with those modifications.

While the museum did eventually acquire Esther's guitar, its twin, the specially customized one played by Bertha, had been passed down to her daughter. She was not interested in selling it at any price, no matter how hard or how often Davidson tried. Even the offer of a knapsack of $100 bills would not persuade her. After three years, the daughter called Davidson and said she thought it was time.

Bertha's Daughter was worried what would happen to the guitar once she turned it over to the museum. Davidson guaranteed the museum would never sell either guitar and moreover, both would be displayed side by side in the Vault just as the sisters had played them. Satisfied with that, the daughter agreed to have the museum take possession of her mother's guitar. 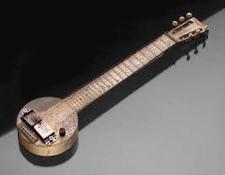 When Davidson offered to pay for the guitar, she told him there was no charge, asking only the museum do the right thing. These two guitars are on permanent display in the "Vault" and are among the museum's most prized pieces. Needless to say, they will never be sold.

What has this to do with the audiophile hobby? Well, very little for sure. But we are music enthusiasts and since guitars are used to make music, a trip to this museum seems logical. As for this audiophile, I was positively enthralled with my trip to Songbirds. So much so, I am writing about it here. I'm also suggesting any guitar enthusiast should see this wonderful museum if possible. All in all, it was a fantastic time and a wonderful way to spend a rainy Saturday afternoon during a wedding weekend. Best of all, it was a glimpse into perhaps a collection of the most prized and rarest guitars on Earth.