Almost a month ago I wrote my first blog about my upcoming move. Since then a lot has happened. I was concerned that selling my Dunlavy SC-VI speakers would be a lot of work, but that has not been the case. An old friend from my days in Boston contacted me through Facebook and we arranged the deal - shipping and crating ran nearly $2000 from Boulder to Boston, but in the end my friend got a great deal (no, I won't tell you what he paid) and I didn't even have to place an ad in Audiomart. How nice is that? Perhaps September is a luckier month than I thought (it's the month that has brought me both forest fires and floods). 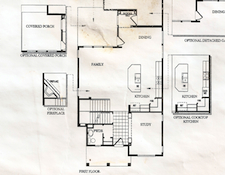 So far I've boxed up four large boxes with old cable. Three of the boxes are going back to the same manufacturer. Some of that cable is over twenty years old! Weighing almost 90 lbs. total, I suspect that some recycler is going to get a serious amount of copper laid on them. The fourth box is going back to The Absolute Sound's office in Austin, Tx.

Yesterday, a potential future nephew-in-law came by and I assembled a nice little system for him. Now instead of plastic "computer" speakers he and my niece can enjoy something that approaches music. I gave him a pair of Quad bookshelf speakers along with an Adcom 535 power amplifier, a headphone/preamp, DAC, and the cabling needed to hook it up.

But probably the most important milestone this week was making a scale drawing on graph paper of both floors of my new house. After the drawing was complete I made little to-scale cutouts of all my large furniture, CD racks, electronics, turntable, speakers and record racks so I could begin to figure out what will and what won't fit in the new place. I was very happy to discover that I will have room for most, but not all of what I want to bring. Some things are simply not going to fit, like the Genesis 6.1 system which takes up too much floor space to wedge into my new basement listening room. I've used the 6.1 system for almost ten years - which except for the Dunlavys is the longest I've used any speaker system. I've loved them, gave them a Golden Ear Award, and have used them with a wide variety of electronics; If only they fit, sigh... 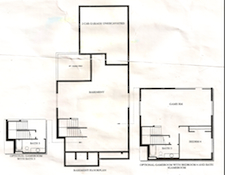 The "starter" system for the basement will be a pair of Skiing Ninja modified AV123 X-Static speakers for the main front channels with the matching SN-modded Voce in the center and a pair SN-modified x-Omnis for the rear channels. That room will also have a pair of JL Audio F-112 subwoofers as well as a screen, projector, and two VPI turntables.

Upstairs in the family/living room I'm planning on keeping it simple with a 2.1 system using ether a pair of Aerial Acoustics 5Bs or Dunlavy SC-1AVs on stands and a compact S-550 Snell subwoofer. The family room will also get the Stone household's very first flat-screen TV monitor.

The only system that won't be undergoing any radical changes (other than location) is my nearfield computer desktop system. I'm going to keep everything exactly the same from one house to the next so I have some basis for comparisons.