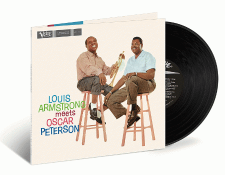 Recently I explored a wonderful new reissue of the classic 1964 Bossa Nova Jazz album Getz/Gilberto from Universal Music's Verve Records label. This was the first in their new series driven by the acclaimed Acoustic Sounds team, a parallel effort to the label's popular Blue Note "Tone Poet" series.  If you missed that review, please click here to catch up on it.

The second Acoustic Sounds release is an even harder to find album in its original Stereo mix from 1959/1960: Louis Armstrong Meets Oscar Peterson. How rare is this on vinyl? Well, consider there are only two original pressings for sale on record collector's database discogs.com and their starting price is about $60 for an average condition album. 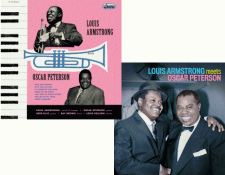 I found six Stereo copies on Popsike.com but those are all marked as "sold."

There also seem to be a bunch of questionable "grey market" type, probably-unauthorized editions out there (colored vinyl, odd cover designs, alternate artwork, etc.).  So there was need for a more definitive high quality reissue.

Of course, the music here is sublime with the two musicians representing the then "old" and "new" waves of Jazz finding terrific common ground and bringing out the best in each other. Armstrong's vocals are passionate, impeccably phrased and often touching. But, for me it is those moments when he takes a solo on his Trumpet that the jaw drops. 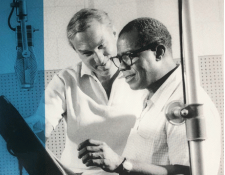 Consider that here you are listening to one of the architects of Jazz, so every note counts and always just feels right.

You can feel the musicians having a great time making these recordings. Now it just sounds natural for us to hear these two together but apparently back in the day it was shocking for fans of the two musicians. Clearly they achieved something special here, bringing together many audiences across the generations.

True to form, the production quality is very high on Louis Armstrong Meets Oscar Peterson with a lovely Stereo soundstage presenting Pops dead center, and Oscar and his band spread across the left and right channels. 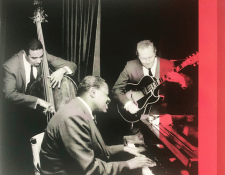 Ray Brown's bass is especially present on this new edition. The 180-gram vinyl is dark, well centered and most importantly quiet.

I have to discuss one possible anomaly I've noticed: clipping distortion.  Now, I have read one review on Amazon discussing this and that it was apparently on the original recording, especially on Pops' very hotly recorded vocal. I used two tracks for spot checking this, "Blues In The Night" and "I Was Doing All Right."  While I don't have a Stereo original pressing on vinyl to compare it to, I do have a Stereo CD from 1997 and some of that distortion does appear to be there for sure but its not as distinct. 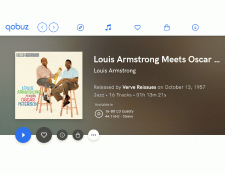 The differences could be due to any number of reasons including the remastering of that CD. Twenty five years of additional magnetic tape deterioration may be an element to consider as well.

Curiously, when I went to Tidal to play the album (a 16-bit, 44.1 kHz CD quality stream) the hot distortion seemed more distinct than on my 1997-era CD.  If you want to do your own comparison, contrast, click here is the link to Tidal and here for Qobuz.

Whatever the issue may be -- if it is an issue at all -- just keep that in mind when you play this otherwise fine sounding edition that some imperfections of the original master recording may be more apparent coming through your speakers. 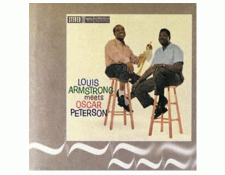 The only other curious detail quirk is that the beautiful laminated cover doesn't indicate that it is a Stereo edition - instead, it features the artwork and label design for the Mono edition.

Not a big deal but a curious thing nonetheless.

Anyhow this is all a bit of hair splitting ultimately. Louis Armstrong Meets Oscar Peterson is a classic album and this reissue is overall a great listen.