Larkin Poe's Self Made Man on Vinyl, Tidal and Qobuz Streaming 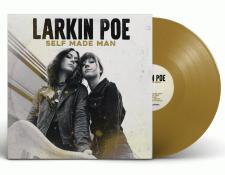 I first learned of this incredible guitar and vocal duo called Larkin Poe in a somewhat roundabout manner: they were key support musicians for a tour that Elvis Costello did a bunch of years back.  Elvis was great that night but in their own way they almost stole the show as they were equally captivating, contributing terrific textures to Costello's music. In fact, you can see them from that tour on Costello's DVD Detour: Live at Liverpool Philharmonic Hall.

Larkin Poe (aka Rebeca and Megan Lovell) started popping up in interesting places including The Basement Tapes project (new music crafted for unreleased Bob Dylan lyrics) which included Elvis Costello (click here for my review). Subsequently over the years I started to hear great reports from trusted friends about them live in concert. Last year I had the good fortune to see them with their own band at the Monterey Jazz Festival and, indeed, they rocked the place madly. 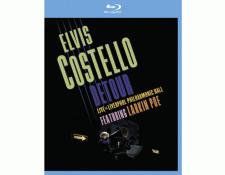 Seriously, they were just smoking (and I don't like to use cliche phrases like that much because... well... cliches)!  But there they were pouring bottomless pitchers of rich, authentic blues-rock riffs and raw overdriven-amplified electric slide guitar texture this side of David Lindley and Lowell George.  Just my cuppa tea, must say -- this duo have it down cold.

However, just having "a sound" isn't enough -- there have got to be great songs and that is where I eagerly dove into their latest album Self Made Man. I bought the album based on the memory of that show I saw and it is every bit as wonderful as I might've expected: bad ass, hard rocking, overdriven distorted electric slide guitar licks, loads of hot amplifier tone and impeccable vocals coupled with great hooks and melodies. And get this: they have self produced and released this (and most of their albums) on their own label, Tricki Woo Records (extra applause for entrepreneurial musicians who also know how to rock!). 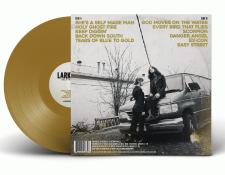 The best part of Self Made Man is that it is a great full album listen beginning to end. It opens up in a balls to the wall manner, in a way paying homage to that early Led Zeppelin sound on the title track "She's A Self Made Man." The tribute buzz continues with "Holy Ghost Fire," with a riff lifting off from the zone of Blue Oyster Cult's "Godzilla" ( click here to check out the official video). But its not all blues rock tribute.  "Keep Diggin'" seals that one-two-three punch necessary for a truly great album opening sequence, delivering a fun hook that feels like a Gospel and Soul tune run through a back porch electric Blues blender -- imagine an alternate universe, if you will, where Pharrell Williams' "Happy" is chased down a dark backstreet alley by the Wilson sisters from Heart circa "Barracuda. 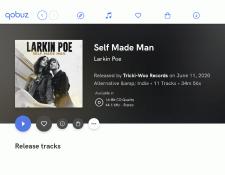 "Scorpion" is a great rocker which I could, oddly enough, hear Marc Bolin of T-Rex singing if he was still here with us (RIP). Yet there are other interesting twists such as the pensive "Danger Angel" which floats the Bluegrassy-backporch blues sound over a more modern slightly hip hop flavored production style that totally works.

Self Made Man is Larkin Poe's fifth album and I'm just beginning to explore their catalog (they've won all sorts of awards for best blues album including a Grammy nomination). Larkin Poe are a force worth watching and if this album is any indication, I think we can expect some great music from this band for years to come. 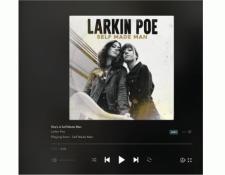 Generally my pressing of Self Made Man is good, well-centered and surprisingly quiet for a standard weight gold-colored record. It sounds great when you pump up the volume (kudos to engineer Roger Alan Nichols of Bell Tone Recording for crafting a great sounding album).

Unfortunately, there was one weird audible manufacturing glitch on my copy of the album which appears at the very end of the second side. It is a bit of a drag as it is literally in the last 10-15 seconds of the song (resulting in a sort of scratch-like sound). I can live with it for now until I find a better copy, but do take note of this for those of you concerned about this sort of detail.

You can also find Self Made Man streaming in CD quality on Tidal (click here) and Qobuz click here). Those are good ways to sample the music but if you want to get more of that guitar-amplifier tone coming through your speakers, you should probably grab the vinyl.