At the 2017 RMAF I noticed an increasingly common sight at audio shows - distracted listening. And what, you might be wondering is distracted listening? Simply stated, it's the act of doing ANYTHING else while (supposedly) listening to high-performance sound reproduction equipment while in a room, in a prime seat... 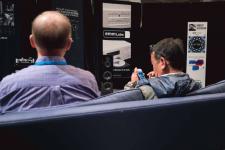 And what sort of "distractions" did I see at RMAF? The most common was the cell-phone waylay. I have included a photo of one example. I understand that the cell phone has, for many people, an inescapable pull that surpasses all attempts at resistance, but I witnessed multiple extended cell-phone interactions by folks during music demos, Maybe, they were waiting for "their track" to come around on the playback cue, but in several rooms where the program material was not self-serve I witnessed the most egregious cell-phone attention hijacking.

Am I being an audio snob? Sure, maybe. It could be that with my own limited physical and psychological abilities, I can only do one thing at a time with any degree of competence. At an audio show I concentrate of listening, which for me is a mono rather than multi-task undertaking. 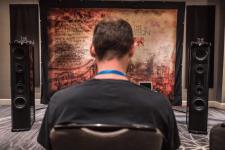 Of course, this begs the question "Given the generally awful conditions of a hotel room sound demo can you really tell anything besides, "Yes, it turns on and sound comes out, so I guess it works." level of analysis? In a good percentage of rooms I do find this to be true. And then others, magically, produce some semblance of what I've grown accustomed to in terms of high-performance sonics. But unless I devote my full attention to the music, sans distractions, I can't tell which are which.

But perhaps we don't have to consciously listen to tell which systems are better than others (at which point distracted listening is perfectly fine) - a recent study with a distressingly small sample group of 22 determined that music with upper (above 22KHz) frequencies removed had a negative effect on mood, and certain brain functions compared to the effects of the same music files in higher resolution whose upper frequencies extended above 22KHz. According to the authors of the study, "It is known that alpha-band power in a human electroencephalogram (EEG) is larger when the inaudible high-frequency components are present than when they are absent. Traditionally, alpha-band EEG activity has been associated with arousal level. However, no previous studies have explored whether sound sources with high-frequency components affect the arousal level of listeners. The present study examined this possibility..." 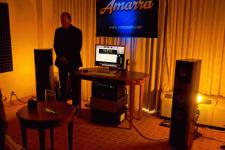 The study authors' conclusion was "In summary, high-resolution audio with inaudible high-frequency components has some advantages over similar and indistinguishable sounds in which these components are artificially cut off, such that the former type of digital audio induces a relaxed attentional state. Even without conscious awareness, a closer replication of real sounds in terms of frequency structure appears to bring out greater potential effects of music on human psychophysiological state and behavior."

So, maybe those folks on their smart phones are "listening" in a better way than I am - don't listen for any audiophile niceties such as imaging or frequency response. No, instead just judge how the room makes you feel. Given the sound quality of most rooms is far less than a system is capable of producing under better circumstances, by using distracted listening you can eliminate all the gear that doesn't make you feel good, and then concentrate on the gear that does.

Perhaps, I've been listening incorrectly at audio shows all these years...