How does he do it? 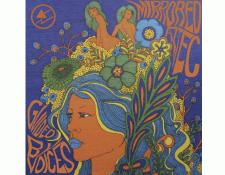 Many of us who are "believers" know that Robert Pollard -- leader of the band known as Guided By Voices -- is a force of nature when it comes to songwriting and sheer artistic output. Pollard has brilliantly and publicly honed his skills over the past 30-plus years as a composer, releasing well over 100 albums and a multitude of singles, carefully crafted into his own cottage industry.  A pioneer of the LoFi indie rock movement, over the years he has moved to genuine HiFi recording and back again, sometimes mixing the forms to great effect.

The newly released GBV album, Mirrored Aztec, falls squarely in the HiFi realm and may well be the best yet from the current incarnation of the band. Featuring '90s band member Doug Gillard (guitar) and from the early '00s Kevin March (drums) plus Bobby Bare, Jr. (guitar) and Mark Shue (bass), there is a unity to this group that is palpable. 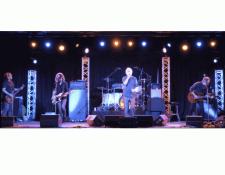 I think Robert Pollard knows it, so he's been no doubt capturing as much of this lightning magic in a bottle while its here (they have released eight studio albums and one live album since 2017 in addition to many tours throughout the US and Europe). This current batch of recordings are musically and compositionally diverse in a positive way as it makes for an interesting album listen that always surprises.  I also sense that Pollard's solo album visions (which have sometimes fallen a bit outside the GBV realm, branching out into near metal, psychedelic and progressive rock territories) have finally been merged into the sound and feel of the band. This is a good thing.... 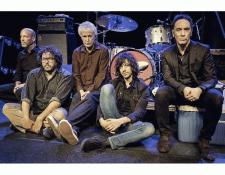 Accordingly, Mirrored Aztec may be the most consistent record GBV has put out since the band's "big label" heyday on Matador Records. So why does Mirrored Aztec feel different than the other recent albums?

First off, beyond it having a unified sunburst-energy feel, the album simply sounds real good from start to finish. This is no doubt a modern digital rock album, however it is one that sounds solid throughout. Now, it isn't Steely Dan's Aja of course (a "HiFi" bench mark for many an audiophile), but its also not one of the home brewed "LoFi" albums where demos and boombox cassette sketches cross paths with more polished studio tracks (an aesthetic that throws off some listeners;  personally I like it when done well such as on Bee Thousand). 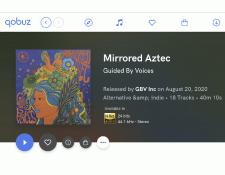 Mirrored Aztec is one of the strongest collections of songs I've heard from this version of the band. Don't get me wrong -- the other albums before this are good, especially 2018's Space Gun and 2017's How Do You Spell Heaven? But when people ask me for recommendations on one or two Guided By Voices album to check out, I usually point them to things like Do The Collapse or -- if they are a bit more adventurous and open to the LoFi aesthetic --- Bee Thousand.  Both are great start-to-finish album listens. Other times I'll simply point them to The Best of Guided By Voices: Human Amusements at Hourly Rates... Anything that might capture the imagination of the novice or casual listener.

Mirrored Aztec is in that league.

Kevin March's drumming combined with Mark Shue's bass form arguably the tightest rhythm section of the band's career. Then there is the guitar simpatico between Doug and Bobby which delivers pure, propulsive and prescient rock DNA, rich with Gibson guitar textures (Gillard usually plays a Les Paul, Bare an SG). 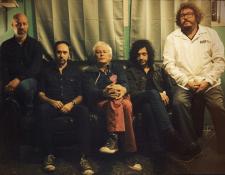 Lyrically, Mirrored Aztec seems more straightforward and digestible than many GBV albums, and we hear Pollard seemingly telling stories that are a little more direct; again, this is in some ways more akin to Pollard's solo albums. For example, the opening track "I Think I Had It, I Think I May Have It Again" feels like a proclamation of the artist rediscovering his muse.

Pollard pushes his band's boundaries quite a bit on this album. "Citizen's Blitz" feels like a mutant love child between Sparks and Devo. There is a bit more prog rock sensibility on Mirrored Aztec -- the stuttering riff on "Please Don't Be Honest" is quirky and infectious, yet it intercuts with a gorgeous acoustic string middle section that is almost hallucinogenic.

The progressive aesthetic reaches an apex with the twisted and playful "Math Rock." This song is both quirky and inspiring as it includes a choral chant from students of The School of Rock (where drummer Kevin March teaches in New Jersey). It is a powerful way to end side one.

Travis Harrison's production touches throughout the album are equally compelling. For example, the jump from "Thank You Jane" to "The Best Foot Forward" propels the album to an upbeat close. 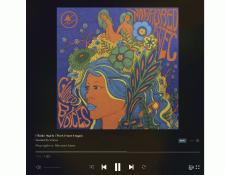 You can find Mirrored Aztec streaming in 16-bit CD resolution on Tidal (click here) and in somewhat higher resolution at 24-bit, 44.1 kHz on Qobuz (click here).  This difference may not seem significant on paper but the jump from 16- to 24- bits represents a pretty big leap in fidelity.  Accordingly, I found the Qobuz version a more enjoyable listen.  Neither were quite as pleasant to my ear as the vinyl version, which was just that tad bit warmer. I'll put it this way, if you are a streamer on the fence, listen to the album first on Qobuz and -- if you like it -- then buy the vinyl from the band to help keep them in business. Also, the cover art on this one is especially fantastic so its nice to have the big LP form factor.

Anyhow, I think you get the idea that I think Mirrored Aztec is a winner from Guided By Voices. Now I need to get the T-shirt of the album. Hopefully we'll get to see the band live again in concert once it is Covid safe. Until then, I am grateful that they are continuing to put out new music. The club is indeed still open. Bravo!