A Tribute To Arthur Smith

He was born in Clinton, SC in 1921, grew up in Kershaw, SC, and was from a very early age an absolute prodigy on the guitar, banjo and violin. His nickname was "The Kid With The Lighting Fingers." He wrote and published a song called Guitar Boogie in 1945. This song is one of several that would be forever linked to him. He influenced musicians such Tom Petty, Eric Clapton, Glen Campbell and Roy Clark. His influence was not limited to the United States. In Liverpool, England, a young guitarist played Guitar Boogie for a tryout in a new band. That kid was Paul McCartney and the band was The Beatles. Arthur Smith died peacefully in his home in Charlotte, NC on April 3, 2014 at the age of 93. The kid with the lightning fingers has done pretty well. 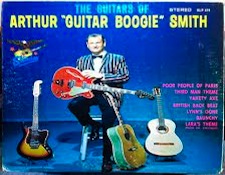 Smith started writing songs at age six and at fifteen was recording music at RCA's budget Bluebird label at the Andrew Jackson hotel in Rock Hill, SC. He passed up an appointment to the US Naval Academy in Annapolis, MD to pursue music. His band at the time was called the Carolina Crackerjacks. At twenty-four, he recorded Guitar Boogie, the one song that would last for his entire life. In 1947 Smith went mainstream and signed with music giant MGM. They promptly re-released Guitar Boogie, and it rose to number 8 on the Billboard Country Music chart and the rest, as they say, was history.

By 1943, Smith had moved to Charlotte, NC where he would live the remainder of his life. In 1951 he was appearing regularly on WBTV, the local CBS affiliate with a country music show. In 1959, a locally syndicated show called the "Arthur Smith Show" was seen on fourteen stations and by 1963 was syndicated throughout both Carolinas, Georgia and West Virginia. Eventually, the Arthur Smith Show was syndicated nationally. 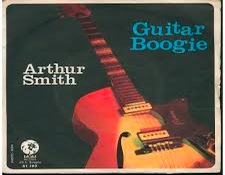 In 1955, Smith recorded a song called "Feudin Banjos" which was interplay between Don Reno's 5-string banjo and Smith's tenor banjo. If you have ever seen the movie Deliverance, released in 1972, you have heard the song credited in the movie as"Dueling Banjos." This song went on to achieve international fame but not ever credited to Smith. Despite his affable and good natured demeanor, Smith was very protective of his music. He sued the studio and won. When asked how much money he received, he would usually smile and point to a picture of his 42-foot sport fishing boat because the Warner Brothers lawsuit paid for it.

In 1957, Smith opened the first recording studio in Charlotte. Here, all of his own music was recorded as well as music by Johnny Cash, Lester Flatt and Earl Scrugs, Pat Boone, Ronnie Milsap, George Beverly Shea and the Statler Brothers. He also recorded non-musical works with the Reverend Billy Graham. In 1965, James Brown leased the studio and recorded "Papa's Got a Brand New Bag." This song would eventually reach number 72 on Rolling Stone's list of the 500 greatest songs of all time.