I have long had something of a love-hate relationship audiophile-wise with some of the records that Frank Zappa put out in the early 1970s. This was the time just after disbanding his original group, The Mothers of Invention and a time when he was ironically / likely contemplating his own commercial potential. After the sonic joy that was his groundbreaking jazz fusion album called Hot Rats, some of the following recordings, especially those made with the next incarnation of The Mothers, were somewhat disappointing from an audiophile perspective. Don't get me wrong: the music was pretty fantastic and often a whole lot of fun. But the overall texture of the presentation was a little bit on the compressed and boxy side. 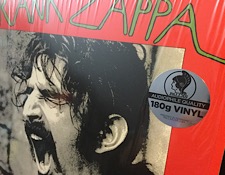 This is pure speculation on my part but I suspect the choice of that particular sound flavor had as much to do with the studios in which he was recording -- many were live recordings -- as well as the choice of band members. Some of the players gave those albums a more straight-ahead, blues rocking feel to Zappa's music.

The radio friendly rock sound is pretty apparent when you listen back to Zappa's newly reissued and remastered 1970 release called Chunga's Revenge. This album's sound revolved as much around ex-Turtles singers Mark Volman and Howard Kaylan (aka Flo & Eddie) as it did the rock-blues muscle of British drummer Aynsley Dunbar.

Notably, listen first to the non-rock tracks like the moody instrumental "Twenty Small Cigars" which features some of the musicians that performed with Zappa on the Hot Rats album. That song has a very different, more dynamic presence than most of the other tracks on the album. On the new 180-gram Pallas-pressed reissue -- the first vinyl reissue of this album in 30 years! -- this difference is mitigated quite a bit, likely due to the to more sympathetic mastering as delivered in all-analog splendor by the great Bernie Grundman. 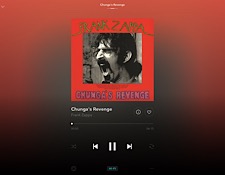 Don't get me wrong, that punchy early FM radio-ready punch is still there in all it's jamming rock 'n roll beauty on tracks like "Transylvania Boogie" and "Tell Me You Love Me." But, there is somewhat less of that claustrophobic feel on this new edition, so the music seems to breathe a little bit more than in prior incarnations.

In fact, I like this version so much that I am getting rid of one of my two original Bizarre Records pressings. Indeed the only real difference between this and the original is the lack of the nifty Bizarre logo and it's wonderful iconic blue-teal colored label on the actual vinyl record, so one copy is enough for this completist fanboy. 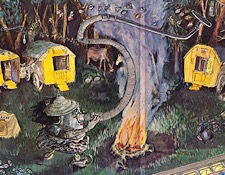 You can find Chunga's Revenge up on Amazon (click here) or via Zappa's website (click here). You can also find it streaming in CD quality up on Tidal (click here to jump to it). There are some fun things on this album, a recording which arguably sets the stage for not only several more fine somewhat comedic rock albums with Flo & Eddie as well as ultimately paving the way for the beloved Roxy-era band which emerged just a few years later.