A couple of weeks back I received a detailed report about the future of mobile music from Ovom Consulting, who are owned by the Mahindra Group. In the report introduction Ovum states, "Digital music providers will need to review the way it is productized and targeted if it is to maintain the rate of service adoption. 'Lean-back listeners' with mainstream musical tastes and passive listening habits will need to be spoon-fed with compelling easy-to-eat digital music packages or 'magazines' free or at affordable price points to continue digital music's growth trajectory." 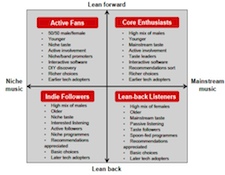 According to Ovum musical consumers can be divided into a continuum. Audiophiles would fall into the "active fans" or "Core enthusiast" categories. But, for the purposes of growth, Ovum's study authors believe that, "Whilst the lean-forward attributes of the core enthusiasts and active fans have been well catered for by the branded music subscription and download services, lean-back listeners are following as the next most commercially viable segment to target."

So, according to Ovum, we audiophiles already have adequate digital music services. Companies that require more rapid expansion and growth to keep their investors happy should be catering to the casual, "lean back" listeners, not music enthusiasts. "Until recently lean-backs have been underserved in the digital music sector with many services requiring the user to make an effort, or have music knowledge or money to set up a music listening session..." In my younger days I would have called these listeners, "morons," 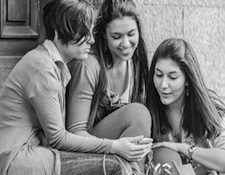 While I could add more alarming quotes (alarming if audio quality matters to you), but I suspect you've gotten the drift of this study already - it further marginalizes and minimizes audiophiles and audio sound quality from the growth equation. In many ways the Ovum study recommends the exact opposite marketing strategy as that taken by PONO. While PONO is very much driven by the notion that sound quality will attract new listeners, the Ovum study points toward convenience and "spoon feeding" (a phrase used many times during the report) as the road to success and growth.

As an audiophile who believes that better sound quality can draw in many "lean back" listeners and convert them into "active fans" and "core enthusiasts," it's easy to view the Ovum report as "the enemy." Its recommended actions would further isolate and marginalize that which most audiophiles hold most dear - sound quality. And without sound quality that engages and involves listeners, music looses much of its power and becomes just another noise used to cover the noise from the neighbors and traffic, which is not exactly its highest calling...