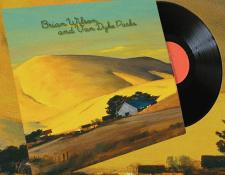 I wasn't entirely planning on writing a review of the first time vinyl version of Van Dyke Parks and Brian Wilson's 1995 collaboration, Orange Crate Art.  I mean... I was waiting for my limited edition colored vinyl version to arrive which I pre-ordered, but I figured that might be delayed given Covid 19.

However, the good folks at Omnivore Records gave me a happy surprise and sent me an advance copy of the standard black vinyl version of the album, so I had to listen sooner.

Within a few minutes I realized I had to write a sequel to my review of the expanded CD edition also being released this month. If you missed that review, please click here.

Assuming you have read that earlier review and understand the backstory of what went into creating Orange Crate Art, I have to bring up a perhaps nit-picky detail endemic to the original versions of the album.  I went back to my 1995 CDs (stock and promo copies, by the way) and noticed that there is an annoying sense of digital artifacts going on throughout the album. You'd only really notice this if you are looking for it, but Brian's voice has this sort of little buzzing sensibility framing most every phrase on the recording. There is also a sort of hollow bright sparkle enveloping the music. 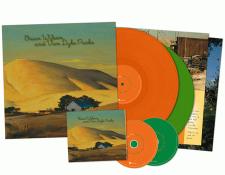 The new CD is a lot nicer, mastered at a noticeably lower volume level (for better dynamic range, perhaps) and displaying very little of that crunchy aesthetic. This may be due to any number of factors:  24-bit remastering, better software and other outboard processors probably came into play. I suspect there was also a greater sensitivity to the music by the producers of this reissue and a desire to not squash down the lush strings, banging drums, flowing guitars, Hawaiian slack slide sounds and more.  Brian's vocals are clearer on the new remaster

Jumping to the vinyl, there is immediately noticeable a major expanded sense of richness to the recording which was not apparent on the CD. You can get a sense of the recording studio the tracks were recorded in. Bass and mid ranges are significantly improved. The strings and guitars now appear much more distinct. The horns on "Sail Away" are Herb-Albert-round.

All the lush details of Van Dyke Parks' compositions and arrangements come into the spotlight here with orchestral swells handing off melody lines to slide guitar signatures as if George Harrison was trading licks with the Los Angeles Philharmonic. The drums sound like they are being played in a room now. 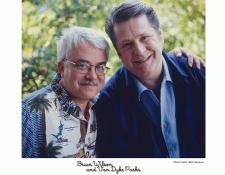 There are super distinct cricket sounds on "This Town Goes To Bed At Sunset" which I never really noticed before.  Its there on the old CD but kind of buried. Now it feels like you are hearing crickets at night in the country side -- there is even a Rooster in there! Again, these are the kinds of details which are comprimised on the CD, especially the old version.

So, yeah. Wow. This is a significant improvement, folks!

I reached out to Omnivore Recordings and learned some fascinating details which come from both Van Dyke Parks and mastering engineer Michael Graves.  The sources Mr. Graves received from Warner Brothers to make this version of Orange Crate Art were high resolution 192 kHz / 24bit files digitized from 1/2" Scotch 3M 996 analog tape running at 30 ips, played back on an Ampex ATR-104.  Graves did all of his mastering at 96 kHz / 24 bit in a completely digital chain. Jeff Powell at Take Out Vinyl cut the master vinyl lacquers at Sam Philips Recording from those files.

Not quite surprisingly, Orange Crate Art was a hybrid recording project from the beginning... Mr. Parks explained how he prepared each piece digitally (pre-Pro Tools technology) in sequences to audition the keys of each for Brian.  Those (I'm assuming reference) tracks were bounced to 24-track, 30 ips multi-track tape for all further analogue recording of instrumental and vocal sessions. The tracks were then mixed down to 30 ips analogue tape. 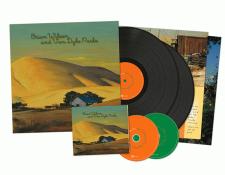 That explains a lot of that warmth coming through on the vinyl pressing which was more or less lost on the 1995 16-bit, 44.1 kHz CD. Now you can hear the rich detailing which went into the creation of this album. You even get a sense of soundstage which is not readily apparent on the CD version.

I don't know if this new version of Orange Crate Art will be on Tidal and Qobuz in high resolution form but if and when it does appear I will be sure to update these reviews in the comments section below.

But for now, if you like Van Dyke Parks and Brian Wilson's music -- and if you love this album -- you owe it to yourself to get your hands on this edition of Orange Crate Art.

Bravo, Omnivore Records for giving this overlooked gem the treatment it has long deserved.