These two seminal acoustic jazz albums were released within a month of each other in 2001. If you don't already have them in your collection, as usual, I've provided links to make their acqusition easier... 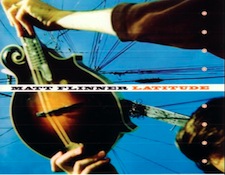 Matt Flinner is the kind of musician who has a historian's attraction to traditional musical forms and a jazzman's love of improvisation. Latitude is Flinner's latest attempt to reconcile these two musically divergent influences. The results are eclectic and impressive. Unlike many all-instrumental albums that degenerate into endless noodling, Flinner has enough respect for the melody to keep the music well-grounded. All eleven original compositions maintain a rustic feel while exploring new musical territory.

Flinner is joined on his sophomore solo release by Todd Phillips on bass, David Grier on guitar, Stuart Duncan and Darol Anger on fiddle, and Jerry Douglas on dobro. Todd Phillips and David Grier have worked with Flinner before on two trio albums, both of which have a similar experimental acoustic jazz bent. Todd Phillips also handles the producer duties on Latitude. Recorded at Monkey Finger Studios in Nashville, Tennessee by Brent Truitt, and mastered by Randy LeRoy at Final Stage in Nashville, the sound is intimate and close but not in your face. Flinner's Gilchrist mandolin sounds exactly as I remember it from RockyGrass Academy last year.

If you like jazz combined with traditional acoustic music, Latitude will be right up your musical alley.

Chris Thile - Not All Those Who Wander Are Lost 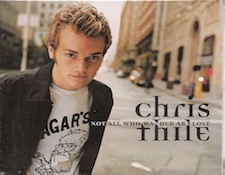 Even young prodigies eventually grow up. Mandolin whiz Chris Thile has reached the ripe old age of 20 (now, in 2012, he's 31), and he shows no signs of narrowing down his ever-expanding musical horizons. His latest, Not All Those Who Wander Are Lost, is described by Bryan Sutton, one of the principle guitarists on the album, as "modern acoustic/neo-chamber music." Sounds about right to me. On this album Thile determinedly expands our working definitions of both musical virtuosity and melodic structure.

Unlike many virtuosos, whose music veers off into a netherworld of technically challenging but musically vapid compositions, Thile's tunes are catchy. The opening number "Song for a Young Queen" (penned for Natalie Portman) is infectious enough to winnow its way into your head and get stuck there. "Club G.R.O.S.S", the most hard-core jazz tune on the CD, still manages to swing, with Jeff Coffin's tenor sax trading "fours" with Chris. The award for most rhythmically and melodically complex selection goes to "Riddles after Dark", a duet that features Bela Fleck's banjo and Thile's mandolin spiraling and jousting through 3:24 of seemingly endless themes, variations, and contrapuntal harmonies.

Joining Thile on Not All Those Who Wander Are Lost are the A-list of acoustic sidemen.  Stuart Duncan and Sara Watkins play fiddle, Jerry Douglas is on dobro, Bryan Sutton and Sean Watkins handle guitar chores, Bela Fleck is the banjoist, Edgar Meyer and Byron House perform bass duties, and Jerry Coffin plays tenor sax for one song. Chris Thile not only composed every tune on Not All Those Who Wander Are Lost, but served as its producer as well. Gary Paczosa was both the recording engineer and co-mixer along with Chris. Audiophile legend Doug Sax, from The Mastering Lab, put on the finishing sonic touches. The sound is simply impeccable.