Some forty years ago, the renowned singer / entertainer Tony Bennett joined forces with one of the most highly regarded of jazz pianists, Bill Evans, for their first of two duet albums. At the time these release may have surprised some people. Those in-the-know recognized that Bennett was every bit the artistic equal to Evans' hip jazz lineage. However, for mainstream pop fans -- or jazz enthusiasts who hadn't considered Bennett as more than the guy who made his name singing "I Left My Heart In San Francisco" -- the collaborations (1975's The Tony Bennett / Bill Evans Album, and 1977's Together Again). may have raise a few eyebrows 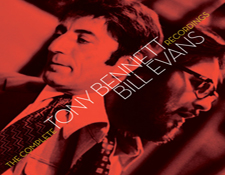 The thing that is immediately apparent in listening to these recordings with fresh ears is the sense of equal parity between the musicians. So many times on vocal music-driven recordings, the other instruments are presented as mere background "accompaniment" to the voice. This one is different. The two performers are clearly joined at the hip on this music and coming at it all from the same musical direction. The level of communication and timing between the two is quite astounding, with Evans anticipating Bennett's every note, not only supporting but accentuating.

It is a give-and-take sort of partnership that rarely happens in a studio setting and is indeed that special secret sauce something that sets apart the best performances. Apparently Bennett and Evans worked out the arrangements fairly spontaneously, and then would pick the takes to be used on the records. Bennett has even explained that the pair didn't even discuss song choices before the recording session. They would agree on a tune, find a good key and then together the two would work out how they would perform it.

That fresh approach comes across in these recordings, as does the mutual respect for one another. It is also very apparent that both artists very much love the music. It all there in the grooves (and bits and bytes if you are listening digitally!). The song that I feel most embodies this essence is the lovely Jules Styne tune "Make Someone Happy" (from the musical Do Re Mi). Just wonderful following the give and take between the musicians...

Over the years there have been numerous reissues and compilations, some with bonus tracks and the like. In honor the 40th Anniversary of these sessions, the folks at Concord Music Group (current owners of the Fantasy Records label) have put together a tasty four LP box set -- called simply The Complete Tony Bennett / Bill Evans Recordings -- pulling together all of the available tracks. The original albums are presented in their original running order and the third and fourth discs present a plethora of (mostly) alternate takes. From what I've been able to glean from the Internet, this material had come out on CD several years ago, but as far as I know this is the first time the set has been put out on vinyl. If you are familiar with the originals, it is fascinating to listen to the two LPs of alternate tracks to listen for the differences in phrasing and approach, and what led them to decide which were to be master takes for the final releases.

Now, I suspect that some of you may be wondering why a reissued / remastered type set like this might be warranted or needed? Beyond the 40th anniversary ....and beyond the fact that Mr. Bennett is once again in the limelight with his acclaimed collaboration with Lady Gaga ... the reality is that the original albums were manufactured during a less than great time for the vinyl world. 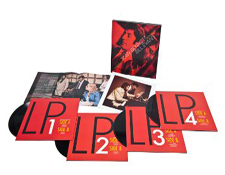 Amidst the many events of the mid-1970s, the Middle East oil crisis was an ongoing event that would take its toll on many a record release for several years -- oil being a key ingredient in the creation of vinyl records. I certainly have no facts here and am not pointing fingers, but some entities were rumored to have used recycled vinyl or cut corners other ways to stretch the available resources. On top of this, Fantasy Records of the mid-late 70s was known for its rather flimsy vinyl pressings, many appearing as thin as the oft-loathed RCA Dynaflex formulation (I have some Fantasy issues from this period that are arguably thinner than Dynaflex!).

One major side-effect of these shortcuts resulted in noisy pressings... I have had two copies of the Fantasy album over the years (including my current one which I'm not real happy with) that I have found to be fairly noisy.

The other thing I found kind of curious is that by the mid-70s Mr. Bennett had ended his relations with Columbia Records and eventually started his own label, Improv Records. Usually artists start their own labels to keep their careers going when a major label has lost interest (ie. albums stop selling) or to maintain artistic controls. I suspect both were factors in Mr. Bennett's case. Thankfully, as far as I know, he never was pushed to make a disco record (but apparently, according to the Wiki, he was coerced by his label to make some pop recordings in 1970 that he didn't like much.

Anyhow, even after putting out an album as artistically wonderful as the first 1975 collaboration with Bill Evans, by the time of the 1977 release, Fantasy Records did not release the successor, for whatever reason. Instead it Bennett's own Improv label put it out (distributed by Audiofidelity, a budget label as I remember, with audiophile roots if I'm not mistaken, back in the 1950s).

I'll be blunt: Together Again was kind of a cheesy looking package, with weak design elements and such. The duo had recorded an arguably better follow up album there, but their label dropped the ball cutting corners with a cheap looking cover and only an incrementally better sounding pressing than the Fantasy release. Apparently, the album's distribution wasn't so good either...