When I decided I really was going to review this debut album by a new band called The Title Trackers, I realized I had to do a little homework to make sure I was really hearing all I was hearing.

You see, this group has found a novel niche between being a cover band and an original rock and roll band AND a comedy act.

Comedy? On Audiophilereview?  Stick with me... this one is a bit different and worthy of your attention. 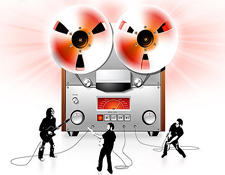 Over the years there have certainly been any number of respected artists who have taken their deep knowledge of particular styles of music and merged them with an innate sense of humor into a musical statement issued to the buying public in the form of pre-recorded music.

Imitation is the sincerest form of flattery, right?

This sort of thing has been going on for decades, whether you know it or not... From PDQ Bach in the classical world to modern day comic pop hero Weird Al Yankovic and everyone betwixt and between.....

There is a long and fruitful history for parody in the music world.

Even one of my all time musical heroes, Frank Zappa has done comedic parody across much of his oeuvre. In 1967, Zappa issued an album under the guise of an imaginary band named Ruben & The Jets which so brilliantly parodied and paid homage to the Doo Wop and early Rock 'n Roll sounds of his 1950s youth, that some DJs missed the joke (later copies were issued with a sticker identifying it clearly as a record by Zappa's band, The Mothers of Invention).

In the late 1970s, Neil Innes and some of his gang from Monty Python skewered The Beatles with their Beatle-approved parody album (and full length mockumentary film) The Rutles (which remains one of the pinnacles of the genre).

One of my all time favorite bands, XTC, put out an EP and a full album in the early/mid 1980s under the guise of a fake band called The Dukes of Stratosphear, which was a brilliant tribute to the 60s psychedelic pop movement, with spot the influence moments ranging from The Hollies and The Pink Floyd to The Move, The Byrds and The Beatles.

Heck, more recently some of the members of Jellyfish put out an 80s influenced album of new music called TV Eyes with recordings that sound like they could have been made in that decade but which never existed before. The Explorer's Club was an acclaimed band from South Carolina that nailed the sound and style of vintage Beach Boys and sunshine pop in a manner so true you might think their records were made in 1965 -- but they were issued in 2008 and 2012.

So...I am comfortable adding The Title Trackers to that lineage with their album Lost Title Tracks. 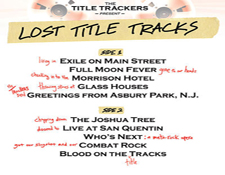 Their concept is simple: You see, in the world of 20th and 21st century pop music, there has been a convention which not many people notice -- but all the hip kids recognize it as the coolest thing for a band to do. That is, simply, not have a song on the album related to the title.  The albums with song-less titles are legion, from Abba's The Album to Frank Zappa's We're Only In It For The Money. So, the Title Trackers had a nifty idea of writing songs for those albums that didn't actually have title songs -- and here's the catch: they write and record them in the style of the artists and the period of their music.

So when they play their song "Living in Exile On Main Street," the band sounds pretty spot on to the way The Rolling Stones sounded in 1972 when they made the album called Exile On Main Street, right down to the horn section and Charlie Watts' loping drum signatures.  I spot checked my original pressing of the Stones album and dang if they haven't nailed a lot of the swagger that made that album what it is (hopefully The Title Trackers didn't have to consume too much booze or do any drugs to recreate that feel!).

When "Checking in to The Morrison Hotel" The Title Trackers knock down all the Doors-isms and Jim Morrison-isms to a point where you almost gotta wonder: why didn't The Doors make a song like this for the album?