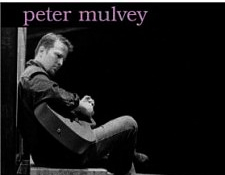 Everybody loves to sing in the bathroom. Why? Because that tile-encased reverberant space makes almost any voice sound really good. A subway station is very much like a big bathroom, but with a dirtier floor. Given its acoustic properties, it's surprising that no one has thought to record in a subway station. Peter Mulvey's Ten Thousand Mornings changes that. Recorded in the Boston underground subway system, this CD defies the notion that you need an expensive recording studio to make a decent-sounding CD.

Recorded entirely at the Davis Square T station on weekends, none of the songs on Ten Thousand Mornings is longer than 4 minutes, primarily because that was the largest window of time between trains. Several of the songs are framed by the sounds of arriving and departing engines. Made up solely of cover material, Mulvey's eclectic tastes span a range from Paul Simon, Leo Kotke, Bob Dylan, and Gillian Welch to Elvis Costello, Randy Newman, David Hidalgo, Lennon and McCartney, Dar Williams, and even Marvin Gaye. His performing style combines percussive syncopated fingerstyle guitar with a commanding slightly gritty vocal style. Jazzy inflections, funky rhythms and clever alternative guitar tunings make Mulvey's versions of even traditional songs like "Rain and Snow" sound unique. Accompanied by a number of equally talented musicians including Jennifer Kimbell, Erin McLeowan, Sean Staples, and Anita Suhanin on vocals, David Goodrich on guitar, Mike Piehl on snare drum, and Chris Smither on shoes, Ten Thousand Mornings features rustic but never Spartan musical arrangements.

Using a Roland VS-890 digital recorder Mulvey and mixing engineer Dave Chalfant created a remarkably good sounding recording. Mulvey's voice is both natural and commanding without using the many studio effects that most big-name pop stars and major heavy-weight producers seem to feel are essential. Instead of gimmicks, Ten Thousand Mornings uses talent and musicality to create powerful songs. Want to hear what you can do with a bit of money and a lot of creativity? Give Ten Thousand Mornings a listen and find out. 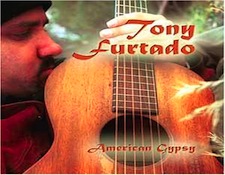 Is he a banjo player or a slide guitar player? Tony Furtado likes to keep you guessing. His latest album, American Gypsy, features not only his vocals, but equal parts of banjo (he's a two-time National Banjo Champion) and bottleneck slide guitar. His fifth solo album since 1989, This album covers a wide gamut of musical styles from Blues to Celtic with even some rootsy rock and roll thrown in. The opening cut "Oh Bertha Bertha" morphs a traditional old time tune into an electric blues moan. The second tune "Angry Monk" features an elegant solo acoustic guitar riff that is soon joined by banjo and slide guitar parts before it veers off into jazz territory.

Joined by Myron Dove on bass, John Burr on keyboards, horn and flautist Paul McCnadless, guitarist Gawain Mathews, and drummers Tom Brechtlein and Aaron Johnson, Furtado leads his musical troops through radical remakes of Mike Nesmith's "Shelly's Blues", the traditional "Staggerlee," and a number of original tunes. Despite all the musical firepower at his disposal, Furtado still remains grounded in melody and traditional acoustic textures.

My favorite song on American Gypsy is "Hartford," written in honor of the late John Hartford, whose pioneering and eclectic work influenced many younger players, including Tony Furtado. Lyrical, whimsical, and slightly wistful, "Hartford" rambles breezily through changes that conjure up images of majestic riverboats steaming down John Hartford's beloved Mississippi river. 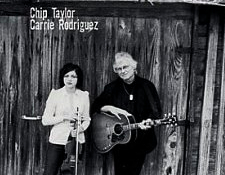 Duos are tricky. Some voices just don't work well together, like Johnny and June Carter Cash. They always reminded me of a bullhorn and a frog trying to sing together. Others voices meld so perfectly that from the very first note they sound as if they were born to sing together. Chip Taylor and Carrie Rodriguez have a synergy that makes beautiful music. Along with their killer vocal harmonies, Chip Taylor writes great songs and Carrie is one hot Texas-style fiddler. Add in John McGann on acoustic guitar and mandolin, Jim Whitney on upright bass, Dave Mattacks on drums and percussion, and you've got a recipe for a stellar CD.

Ten of the twelve songs on Let's Leave This Town are written by Chip Taylor. The second cut "Him Who Saved Me" typifies Taylor's style, combining religious imagery with topical rustic and secular references. At his best, Chip Taylor's work is in the same league as two other great Texas songwriters Townes Van Zant and Guy Clark. Carrie Rodriguez' vocal style has equal parts Nancy Griffith, Emmylou Harris, and Dar Williams, mixed into a Texas-style gumbo. Her fiddle work calls up Johnny Gimble and Chubby Wise, with just the right hesitation and syncopation to seriously swing.

If a space alien appeared and demanded to know under penalty of immediate vaporization what Texas music was all about I'd give him a copy of Let's Leave This Town confident that after two songs he'd be reduced to a pulsating pile of contented jelly. Damn, this album almost makes me wish I were a Texan.