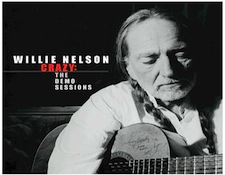 Once upon a time Willie Nelson was just another starving songwriter trying to make it in music city. Stories abound of songs he tried to sell for $50, and during the early 60's he made a number of demos for Hal Smith and Ray Price's Pamper Music. In 1994 a large reel labeled "Pamper Demos" was found in Sony/ATV/Tree music vaults, and it contained many of these original demos. Fifteen of them have been digitally restored and mastered on Crazy - The Demo Sessions. Along with the first versions of "Crazy," "I Gotta Get Drunk," and "Three Days," is the previously unreleased song "I'm Still Here."  Some of the tunes are breathtaking brief; "I Just Destroyed the World" only runs 1:13.  Even the longest, "Crazy," has only a skeletonized arrangement and backup. These Spartan arrangements, often merely with Willie's voice and guitar, highlight not only the strength of his early material, but Willie's unique vocal phrasing and delivery. Just like Johnny Cash's studio recordings, much of Nelson's young brilliance was buried under syrupy arrangements and loopy background singers. On Crazy - The Demo Sessions none of these stylistically dated musical distractions obscure the timeless modernity of Nelson's songs.

Producer Steve Fishell and digital restorer and editor Buddy Miller should be commended on the fine job they have done resurrecting these old tapes. Judging by the sound, they were not recorded on exactly state of the art equipment to begin with. Occasional pitch variations and deviations from full A-440 pitch are obvious on certain tracks, but these small sonic warts never get in the way of the music.

Along with fifteen tracks of great music comes an equally worthy extra. Hank Cochran, the great Nashville-based songwriter who helped Willie Nelson sign his first publishing deal, provides insight into Nelson's first years in Nashville in an exclusive interview produced by Digital Vision Media. Both PC or MAC owners can enjoy this quick-time multimedia presentation on their computers.

Crazy - The Demo Sessions is the sort of album that at first might be dismissed as merely for hardcore Willie Nelson fans. But after a single listen anyone who appreciates great American music will be smitten. If you only want to own one Willie Nelson CD (which is akin to eating one potato chip), this is the one to get. 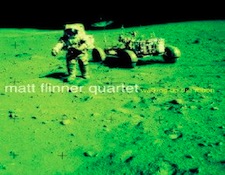 Matt Flinner's last outing consisted of an acoustic trio with David Grier on guitar and Todd Phillips on acoustic bass. This year's installment features Flinner leading an electric band on his personal odyssey of how far away from bluegrass a mandolin player can get and still be true to the essential nature of the mandolin. Guitarist Gawain Mathews, electric bassist Sam Mathews, drummer Aaron Mathews and special guest Colin Bricker on sampler, join Flinner as he explores the outer limits of electric jazz.

Along with four original songs by Flinner, three from Mathews, and one by Bevan, the Flinner quartet works its way through Duke Ellington's "Caravan" and "Cissy Strut," along with Sting's "Walking on the Moon." My vote for the most infectious original tune goes to "Ice Queen" which sports a convoluted structure coupled with a euphonious melody. Sting's "Walking On The Moon" lends itself beautifully to the Flinner quartet's musical explorations. Imagine Chick Corea's Return to Forever with less space and a more organic core.

Self-produced by the quartet, recorded by Colin Bricker at NFA recording in Denver, Colorado, and mastered by Dave Sinko at The Sound Emporium in Nashville, Tennessee, this CD successfully overcomes the difficulty of putting an acoustic mandolin into a mix surrounded by amplifiedinstruments. Flinner's Gilchrist mandolin sounds just as natural as it has on previous all-acoustic outings. Mathew's electric guitar has great bite and his wide range of tonal shadings come through with remarkable delicacy and depth.

I've previously reviewed Don Stiernberg's Unseasonably Cool, which demonstrates just how well a mandolin can fit into a traditional jazz combo. Matt Flinner's Walking on the Moon delves into the outer edge of jazz, pushing the musical envelope. Both Stiernberg and Flinner are on the leading edge of a contemporary mandolin renaissance. Listen to these two disks back-to-back to experience the true flexibility and creative range of a mandolin-led jazz group. 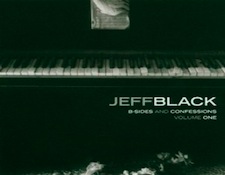 Making a living as a songwriter in Nashville, Tennessee, is about as easy as being an Iceman in Anchorage, Alaska. Only talent, perseverance, and a certain amount of blind luck along the way make it possible for a songwriter to achieve any level of success. Jeff Black has written a #1 single for the band Blackhawk, as well tunes covered by Waylon Jennings, Sam Bush, and Lisa Brokop. His second solo release, B-Sides and Confessions Vol.I, represents Black's first release on Dualtone Music. His first, Birmingham Road, was released on Arista Records and featured contributions by Wilco, Iris Dement, and Geggy Tah. B-Sides and Confessions Vol. I is a much smaller, more personal album, with stripped down arrangements and a minimum of sidemen. The songs feel more informal, private, and less commercial. Black's cover of his own tune " Same Old River," originally popularized by Sam Bush, retains its anthem-like qualities while gaining an added degree of intimacy and poignancy.

Besides writing all the lyrics and music, Jeff Black plays most of the instruments on B-Sides and Confessions Vol. I. He handles acoustic guitar, piano, harmonica, banjo and all vocals. On most of the songs Byron House adds bass while Craig Wright contributes drums and percussion. On "Holy Roller" Michael Webb plays bass, while on "To Be With You" Jody Nardone plays piano and David Jacques plays bass. In keeping with the minimalist nature of the production, the packaging and graphics are all in black and white and the only photograph of Jeff Black is a moody, blurred close-up.