This One's For Him: A Tribute to Guy Clark 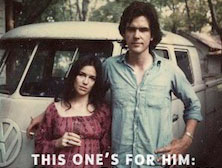 This One's For Him: A Tribute to Guy Clark

It's nice when your friends do something for you to celebrate your birthday. For Guy Clark's 70th Tamara Saviano and Shawn Camp pulled together a passel of Texas-based musicians and friends to record a collection of Clark's songs. The results show the range of Clark's songwriting and the musicians of Texas.

Guy Clark's first big song was "LA Freeway." Recorded originally by Jerry Jeff Walker, it's been covered by a phalanx of performers over the years. Clark soon relocated to Nashville, where he continued to write songs such as "Heartbroke" which was a big hit for Ricky Skaggs. He also mentored young songwriters fresh in town including Rodney Crowell and Steve Earle. During his long career, Clark has continued to tour and regularly release fine albums. His latest, Somedays the Song Writes You, came out in 2009.

On this anthology nearly everyone who has been associated with Clark during his long career takes a turn on one of his songs. Lyle Lovett, Kris Kristofferson, Vince Gill, Jerry Jeff Walker, Emmylou Harris, John Prine, Rosanne Cash, Rodney Crowell, and even Willie Nelson contribute their own versions of Clark classics. Standouts include Willie Nelson's "Desperados Waiting for A Train," which sounds as if it was written for him, and Vince Gill's rendition of  "Randall Knife."

The core backup band features Lloyd Maines on pedal steel, Verlon Thompson and Shawn Camp on acoustic guitars, and Kenny Malone, and Larry Atamanuik on drums and percussion. All the songs were recorded "live in studio" with all the players recording their tracks simultaneously, like at a live concert. This makes for more spontaneous music-making since all the players can hear each other's parts and react to them as they play, which you can't do when each musician tracks their parts separately. Mixed and mastered by Austin-based engineer, Fred Remmert, the sonics are first-class.

If you're looking for clunkers, you'll have to look elsewhere. Every performance on This One's For Him is a showpiece for both the performers and the song. Although the concept behind this album is that it's a gift to Guy Clark, the true recipients are his fans, along with anyone else who appreciates American traditional and roots music.