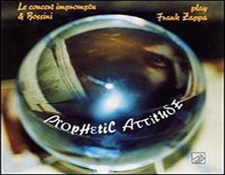 In the mid 1960s, a fellow named Joshua Rifkin put out an album of classically inspired musics intended to reveal the inner genius beneath The Beatle's decadent rock and roll that was brainwashing the world as we knew it. That album, The Baroque Beatles Book, was fun and compelling, if a bit on the kitsch side. Still, it did have a point to make and it did that very well, making the album a success which remained in print for many years (you can get it on iTunes today, even!).

So anyhow, about five years ago one of my NY-based music 'n tech journalism buds, Scott Alexander (hey, credit where credit is due) turned me onto this new-ish album of classically inspired music performed by a "wind quintet" that I only finally got to hear at the end of 2013 (long story). This recording contains all sorts of lush melodies which fall somewhere between Mozart and Stravinsky. Its really quite relaxing, the kind of music you'd like to hear on a Sunday morning, possibly played over National Public Radio, while enjoying a nice almond croissant and considering what you're going to do on your weekend driving up to the wine country.

However, this one Scott turned me on to is very different -- you see, this music is written by none other than Frank Zappa.

Now, the notion of melodic, enjoyable sounds written by Zappa is not a surprise to me because I have been a huge fan of his music for a long long long portion of my life (I became a fan in the seventh grade!)

I know the details about Frank and his influences. The important thing for you -- dear reader and likely Zappa novice -- to understand from the get go is that first and foremost Zappa considered himself a composer. He like to do nothing more than sit down with blank music scores and fill in black dots to create all sorts of experiments in time and sonic texture. One of his songs is even called "The Black Page" because it contains so many notes on it. Really.

That Zappa made his name during a time when rock 'n roll was the prevalent musical vehicle of the times was merely a by-product of when he lived. Had Zappa been born in another era, he probably would've been just another composer from LA leading his own little ensemble right alongside Bartok and Rimsky-Korsakov or any number of other mainstream classical music composers. 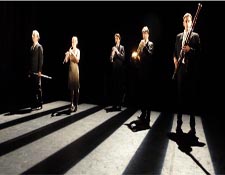 This recording made by Le concert impromptu (lower case name intentional) conducted by Jean-Michael Bossini is a quite fascinating interpretation of Zappa's music done essentially in a chamber style with flute, oboe, clarinet, horn and bassoon -- all instruments FZ used during the course of his recording career, especially in the 1960s.

Beyond the fact that this album even exists, it is pretty amazing is how they've ironed out a lot of the weirdness that is inherent in some of FZ's own arrangements, showcasing the melodies first and foremost. Some hardcore FZ fans might balk at this because it seemingly sweetens up FZ's music, rounding out the rough edges for mass consumption and such. I personally would disagree with that as all the details are there for your enjoyment -- it is just presented in a way that actually lets you just hear the compositions without including the quirky little things that made Zappa Zappa and which often throw off certain listeners.

There are no random snorking sounds on this recording. There are no sped up / slowed down tapes of voices speaking ominously. There is no clanging percussion.

Nope, what you get here are just the primary melodies on the songs and it is really quite fascinating and really quite good.

I think Frank would probably have some issues with some of the performances himself -- and he would probably argue that the clangs, bangs, snorts and snurfles were in fact part of the original compositions -- but he would also probably grok the concept that a recording like this might open his music to a wider audience and thus would agree to it.

Devo made a tongue-in-cheek album of EZ Listening arrangements of their music many years ago.

I want to hear this album played in a Starbucks or a supermarket.

Now, you're probably wondering why I'm writing about a record from in 1997 that I learned about around 2008 in 2014. Here is my story: when Scott first told me about the album, I went to look for it on ye old interwebs and found it selling for ridiculous money. Seriously, a CD was selling for between 40 and $60 per CD and I thought that was kind of ridiculous so I decided to wait a bit on it. And I waited... and waited.... and waited. Because it was Zappa related I didn't want to judge the recording based on an MP3 download of it first time out. Finally after all these years a cheap used copy of the album appeared on Amazon for for $12 and I decided to go for it -- it wasn't even a complete copy (mine is missing the back cover!). There is still a copy on Amazon as of this writing selling for more than $100!

The French import CD sounds quite good. Nothing remarkable fidelity wise, but overall it is very pleasant. To that, checking out the free preview samples up on iTunes, they sound pretty good too and will probably serve you fine for an album of this nature. I mean -- you'll probably be playing this quietly as background music while drinking your coffee or while napping in the park on a sunny Sunday afternoon.

I'm really enjoying the recording, as it is really very pleasant. I suspect it might be a good way to introduce certain people to Zappa's music -- Zappa for those people who never thought they'd like Zappa.

That said, you might want to check this out because it's simply fun. You can probably play this for your family and no one will be freaked out. Some people might even get inspired by the music and decide to explore some of Zappa's own recordings. And that, frankly, is the point of a release like this.

Mark Smotroff saw his first Frank Zappa concert on Halloween 1976 at The Felt Forum in New York City, the first of many FZ shows he would see over the years. Smotroff is a freelance writer and avid music collector who has worked for many years in marketing communications for the consumer electronics, pro audio and video games industries, serving clients including DTS, Sega, Sony, Sharp, AT&T and many others. www.smotroff.com Mark has written for EQ Magazine, Mix Magazine, Goldmine/DISCoveries Magazine, BigPictureBigSound.com, Sound+Vision Magazine and HomeTechTell.com. He is also a musician / composer who's songs have been used in TV shows such as Smallville and Men In Trees as well as films and documentaries. www.ingdom.com Mark is currently rolling out a new musical he's written: www.dialthemusical.com.