The Red, White and Blue of American Rock 'n Roll

When it comes to vinyl reissues, some music collectors and audiophiles -- two very different entities -- won't go near them, opting to spend small fortunes on rare original pressings which have an air of authenticity about them that is almost impossible to describe in print. The more audio-oriented collectors (like myself) do like getting original pressings because some of them tend to sound better, being made off the original stampers, master tapes and such. 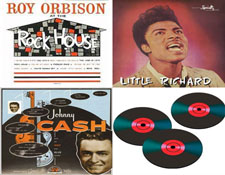 However, in the case of old records from the 1950s and the early to mid 1960s -- especially in the singles-driven realm of pop rock 'n roll and country & western music -- albums were not always big sellers. And among those that sold, many were played on record players that were far from today's audiophile dream turntables. Thus, finding a pristine copy without scratches and groove distortion from heavy play on an improperly set up player is a difficult prospect. Accordingly, those rare pressings often command high price tags.

Still, for those of us who either "just want the music" or "a close approximation of the original sound" or perhaps a "novel update" on a lost classic, reissues are an option worth considering. This is especially true since in recent years the record labels have gotten much better about putting out fairly respectable recreations, using original album art, period-accurate labels, higher-quality vinyl and -- where possible -- going back to the source tapes for creating a new LP master.

Following are mini reviews of three gems issued as special editions on Record Store Day this year from the dawn of rock 'n roll and early country & western that won't set you back to much. They all sound really great, are fairly true to the rare originals in terms of original labels and cover art and such.  Plus, they offer something extra special for the newbie collector that makes owning these versions possible more fun than even an original: spiffy colored vinyl! 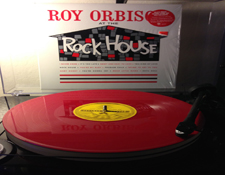 Roy Orbison's 1961 album At The Rock House -- his first album, a collection of singles and other recordings -- was apparently issued by Sun Records owner Sam Philips to capitalize on the artist's ascendent fame after leaving his label. So you aren't going to hear "Pretty Woman" on this album.  What you will hear is Roy Orbison by way of the early sound of Sun Records studios, the same place that recorded early sides by Elvis Presley, Jerry Lee Lewis, Carl Perkins and Johnny Cash, among many other country 'n rhythm 'n blues pioneers. This limited edition run of 3,000 copies on thick, perfectly centered red vinyl is a handy compilation of early Orbison music, a record which I personally never even knew existed! Some fun tunes here including "Devil Doll" and "Ooby Dooby," plus the lovely ballad "I Never Knew," which hints at the dramatic sonic grandeur he would reach for on the Monument Label several years later. 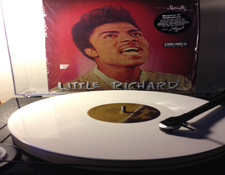 Little Richard is another one of those artists from the early days of rock and roll whose albums are revered and are next to impossible to find affordably in decent shape on original pressings. Heck, its not easy to find some of these albums even on poor condition copies!  Now, as an older generation of collectors is downsizing (or sadly passing on), there are some of these original albums popping up here and there, but if they are in good condition inevitably they get eBayed and auctioned off at crazy prices most of us can't justify. So for less than $20, this lovely, dead-quiet, thick white vinyl reissue of his eponymously titled second album on Specialty Records (from 1958) is a joy, replete with original cover art and a sticker endorsed and signed by Little Richard himself. These are some of the original rock 'n roll records that influenced a generation of future songwriters and performers, including John Lennon and Paul McCartney: "The Girl Can't Help It," "Lucille," "Keep a Knockin'," "Good Golly Miss Molly" and more... This is Rock 'n Roll 101, folks. Essential stuff. 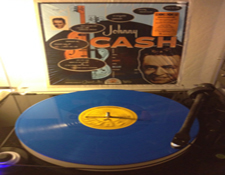 This special edition of Johnny Cash and His Hot and Blue Guitar came out last spring and I've loved having it in my collection. Johnny Cash's first album on Sun Records was another one of those albums you never see around, and if you did it was either beat-up or astronomically priced. This pressing is on clean, dead-centered and quiet thick milky blue vinyl. The music pops and is tremendous. Look at the tunes on this debut album: "Folsom Prison Blues," "Cry Cry Cry," "I Walk The Line," "The Wreck of the Old '97," "The Rock Island Line." Talk about greatest hits! Crucial Cash, and on a fun rich sky blue color vinyl (matching the cover art) that will make you smile every time you play it.

You can still find these albums around if you check your favorite record store or online sellers.

Go ahead and have some fun colorfully immersing yourself in the early roots of modern American pop music.