The New Shape of Things To Come - HG Wells Style

There is a band of relatively recent vintage called "We Were Promised Jet Packs" whose name is both brilliant and sobering. For centuries now the deep thinkers among mankind have been dreaming of future times and the promise of new ways of doing things. Alongside the technical advances of science and technology, creative writers of Science Fiction stories began to bubble up (according to the Wiki, dating as far back as the 1700s!), envisioning often exciting and sometimes frightening future times. 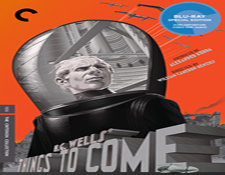 Fast forward to the mid 1930s and we find one of the premier and most well established writers of the genre, H.G. Wells, well up in years but still enormously influential and popular (he wrote more than 100 books in his lifetime!). He is so popular that he is involved with the creation of a script - and even in the actual production -- for a filmed version of his story The Shape of Things To Come. There is some incredible back story on what went into making this film well beyond the scope of this review so if you get into this movie I urge you to read up on it.

Bottom line is this was one of the most ambitious film projects attempted since Fritz Lang's landmark 1926, classic Metropolis.

Things to Come (as the title was eventually shortened to for the film) is a still stunning look forward into what might happen tomorrow. Beginning in 1936 it eerily predicts (essentially) the start of World War II and the bombing of London. It envisions a breakdown in society. the widespread epidemic of incurable diseases and an eventual new world order in which science leads the way over war-mongering politicians (who subsequently have little say over the technology's use for anything other than positive-driven progress). 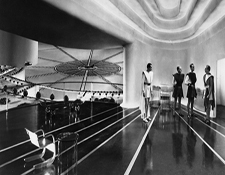 I won't spoil the ending but will tease you with promises of some spectacular cinematography and futuristic imagery. There are some stunning scenes of the devastation of society and its reinvention.

And there is some incredibly stilted dialogue and awkward acting!

Yes, H.G. Wells' first script is perhaps not probably not his finest written hour yet the story remains powerful and the look and feel of this film remains important.

And now -- at least for the first time in at least my lifetime! -- we can actually SEE a quite lovely, restored version of Things to Come, thanks to the good folks at Criterion.

This is really significant since up until now only impossibly bad prints were circulating, so one had to really be a hardcore fan of science fiction films to weather the genuinely terrible quality images and blurry sounding audio. The film starts out with a quite dark look and feel to begin with (the onset of war) so after decades of decay and poor transfers the once brilliant movie was reduced to a fuzzy mess with occasional striking close up image that would jump out at you.

I can't tell you how many different versions of this film I've looked at over the years.

According to the great booklet that comes with the Criterion Blu-ray Disc edition, this a new 4K digital transfer made from a "...35 mm fine grain composite print held by the British Film Institute." It goes on to say that "the original monaural soundtrack was remastered at 24-bit from the optical track of the British Film Institute's 35 mm fine-grain composite print as well as other 35 mm prints. Clicks, thumps, hiss and hum were manually removed using Pro Tools HD. Crackle was attenuated using AudioCube's integrated workstations." 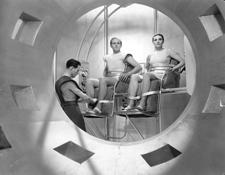 Clearly , a lot of work went into this much needed restoration and the results are wonderful. Now you can see all the fine details of the war-torn "Everytown." Now you can revel in the wonderment of the futuristic underground city (which a famous hotel chain seems to have borrowed much of its iconic floor plans from!). You'll see a flat screen TV!

And you'll be able to better understand the important but admittedly somewhat stuffy dialogue.

That is all part of the charm and the beauty of this film.

I am very much pleased in this restoration as it has achieved a great result : bringing an important film back to a state where a new generation can actually watch, enjoy and hopefully perhaps learn something from it.