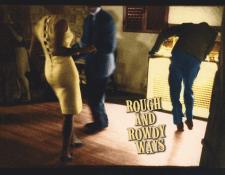 The new Bob Dylan album dropped on the universe late last week and a collective sigh of relief was heard around the virtual world.  As he has done time and time again, Mr. Zimmerman has once again given us the joyous curveball of surprise in the form of a fine and compelling new batch of recordings. Music which sounds immediately right, familiar and challenging.

Rough and Rowdy Ways is a not really a so called "return to form" -- a musical chameleon in many ways, Dylan always reinvents himself.  But I do think he's finding new musicality in the context of his late period bluesy growl in a way that works really well. In short: his voice sounds better than on his last album of original music, 2012's Tempest. 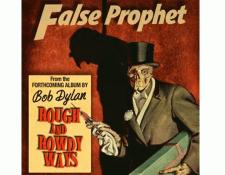 My favorite songs thus far are the album opener "I Contain Multitudes" and "My Own Version of You."  The rollicking "Goodbye Jimmy Reed" is pretty neat in that it recaptures some of that vibe Dylan had in the mid-sixties on albums like Blonde On Blonde. It bears more than a passing resemblance to "Leopard Skin Pillbox Hat" -- heck, it sounds like its even in the same key!  This is not a bad thing -- I think its a pretty cool thing actually. He even blows his classic Harmonica a little bit. "Crossing the Rubicon" is another bluesy slow burner.

Like most great Dylan albums there is always the temptation to read between the lines for hidden meaning in the lyrics. In this case, "False Prophet" and "Black Rider" are two places I've started to study a bit... I'll put it this way: I know what I am getting out of this song, but your perspective may be different (click here for a lyric video). 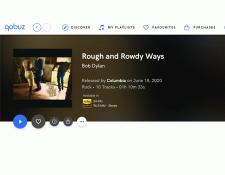 Rough and Rowdy Ways marks one of those instances where the streaming music services earn their keep as a powerful resource during these socially isolated Covid 19 times... times when mail deliveries are delayed and you can't just walk over to your favorite music or department store to buy the new Dylan album in person.

Happily, I found the album streaming on both Tidal and Qobuz. This time our friends at Qobuz are the winners because they have Rough and Rowdy Ways streaming out of the gate in high resolution 96 kHz, 24-bit fidelity and it sounds pretty terrific. 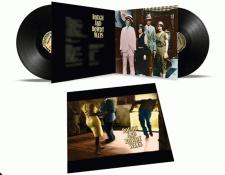 There is a nice warm presence surrounding Dylan's voice, yet the instrumentation surrounding him sounds clear and distinct.

I suspect that the vinyl version will be cut from these same high resolution digital masters, but that is to be determined. As soon as I get my hand on that version of Rough and Rowdy Ways, I'll be sure to write up an update to this review. Out in July, you can pre-order the LP record version from Dylan's website  (click here).

The standard CD quality stream on Tidal sounds pretty good all things considered but there is a bit of that digital edge which comes about sometimes, possibly when a high resolution source is chopped down to a lower resolution form. 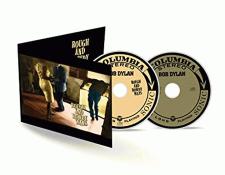 For now you should dive in and listen to Rough and Rowdy Ways on Qobuz (click here) or Tidal (click here). If you are like me, you've been waiting for some inspiring new music from some of our living legends like Mr. Dylan.

We are lucky that even in their golden years, our remaining important artists from the golden age of rock and roll are still delivering fine and even important music for the ages.  I'm looking forward to what Bruce Springsteen and Paul McCartney might come up with next. Dylan just raised the bar for the times.