The Hunt For Secret Messages: ELO Reissue Reviewed On Vinyl and Tidal

By now you probably know that a new incarnation of the Electric Light Orchestra is on tour in America for the first time since the early 1980s. This is a fine 21st Century show featuring band co-founder, main visionary and composer Jeff Lynne presenting studio-faithful renditions of his music in a live setting to large audiences arguably for the first time ever. This new expanded orchestral production presents this complex and multi-layered music live in a manner similar to how Brian Wilson brought his most intricate studio creations to life on the concert stage in the early 00s. I saw the opening night of this current ELO tour in Oakland, California and it was near perfect in that regard. 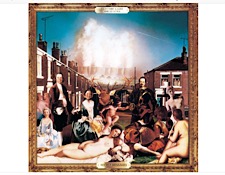 The one omission was the glaring lack of music from an album that had been announced as being re-issued coincident with the tour: a restored, expanded version of ELO's 1983 opus, Secret Messages. At minimum it would've been fun if they had included a song like the album's hit "Rock and Roll is King."

Nonetheless, my ELO buddy Frank and I waited patiently for the new album to come out and on release day expected to find it in our favorite record shops (yeah, some of us total fanboys still like going to a physical store to buy stuff). And there we received a big surprise: no new ELO was to be found. A bit more unsettling was that the stores didn't even really seem to know or care about it. The biggest record retailer here in San Francisco which should've had at least five or 10 copies of this album apparently only ordered two which sold out instantly and it took several weeks to get more in stock. The other day Frank sent me a text message after he bought his copy there. I rushed over and grabbed the other copy -- again, only two in stock.

Consider that: I got one and Frank got the other. The Oakland Oracle Arena holds something like 18,000 ELO fans and the night I saw them the place looked pretty much sold out.  So, you'd think they might sell a couple albums if they stocked 'em.... but... no.... Now I do understand the problems these days stores have with not being able to return albums. But.. well... they are in the business of selling recordings so you'd think they'd stock at least some of the obvious things (ELO is not the only one suffering from this short sighted approach). 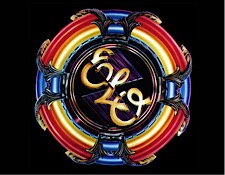 And thus here we get to the grumpy old man portion of our show where I whine about changing times and the impact of the Internet on the music business (blah blah, blah, yada yada yada). Sure, I could've pre-ordered the album so it arrived at my doorstep on the day of release. But as convenient as that can be, that's not as much fun (yes, fun!) as the rush of choosing your album from the shelf and taking it home to play in anticipation. I do order online quite a bit but that is something I usually reserve for indie artists selling their music directly from their websites, doing Kickstarter or Pledgemusic campaigns and such. This new release is out on a major label, Sony / Epic / Legacy, so it should've been everywhere. The fact that many of the stores didn't even know about the album was kind of pathetic.

Anyhow, the new reissue is pretty sweet featuring six tracks that were cut from the original record back in the day. And it is an enjoyable and surprisingly warm sounding listen given the new information in the inside gatefold from Jeff Lynne himself:

"'Secret Messages' was the first and last time I ever used a digital multi-track tape recorder. We tried out a different place to record. It was Wisseloord Studios in Hilversum, Holland. The sound of the room was just how I liked it. I enjoyed recording there so much, I wrote enough tunes for a double album! Anyway, this will be the first time 'Secret Messages' has escaped intact. Thanks to all you great fans who've been asking to hear the original double album for a very long time." 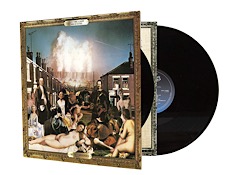 The new version of the album is indeed a more considered presentation of this music, feeling more substantive and also less cramped, spread out across two discs. You can also find the expanded version streaming in CD quality up on Tidal (note: this version suffers a bit due to the nature of how the album was designed as some of the tracks were mixed to segue from one to the next so in a streaming playlist format you will sometimes experience an annoying gap. Well, it is annoying at least for this fan who appreciates a good segue!)

At the time of its release, Secret Messages was perhaps somewhat overshadowed or at least overlooked due to rapidly changing music trends (new wave, new romanticism, post-punk, synth pop, MTV, etc.).  It reached the Top 40 in America but only made it to #36 (whereas it reached #4 in the UK!). The band was changing as well, trimmed to a core of Jeff Lynne playing most instruments supplemented by keyboardist Richard Tandy, drummer Bev Bevan and bassist Kelly Groucutt. In retrospect, this album is really more of Jeff Lynne solo album and its tighter sound foreshadows the direction he took as a producer of recordings by George Harrison, Tom Petty and supergroup The Traveling Wilburys (Jeff with the aforementioned plus Roy Orbison and Bob Dylan). The times were and indeed a-changin'...  I'll put it this way:  if you liked Jeff's first official solo album (1990's Armchair Theater) you are probably going to like this one.

Reconsidering some of the original tracks you may have missed, "Train of Gold" sounds like classic mid-70s ELO in many ways -- what with its Lennon-esque strings and "I Am The Walrus" inspired "woooos" -- yet it somehow sounds quite timeless. "Rock and Roll Is King" is still a fun rouser which in retrospect puts Jeff's production choices on the tracks he drove for Dave Edmunds' Information album into perspective. 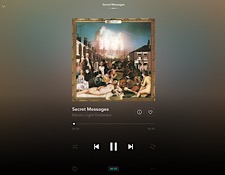 Of the restored "new" songs, "Endless Lies" is kind of an ELO meets The Beatles meets Roy Orbison trip that is wonderful and compelling. "Buildings Have Eyes" is a fun popper with a nifty Kinks reference built in, lifting off from a lyric reference to "Waterloo Sunset" off a Peter Gunn-like riff with Beach Boys accents this side of Robin Scott's M ("Pop Musik") and The Silicon Teens -- secret messages, indeed! That synth pop influence can be heard on "Time After Time" with its (probably sampled) female vocal chorus hook; but don't expect Depeche Mode here, this simply sounds like a period where Jeff was creatively experimenting with new ideas, sounds, technologies, production directions and textures.

"Hello My Old Friend" (apparently about his home town of Birmingham, according to the Wiki) may well also be Jeff's farewell tribute to John Lennon (who was murdered tragically in late 1980). A seven minute epic with extreme Walrus-ian overtones, hearing this in its proper sequence at the album's end it feels in its proper place. Also, it now stands as a link between -- and I say this with the utmost of respect -- original Beatle homages in that vein by The Rutles and The Dukes of Stratosphear (aka XTC).  Taken as a whole, all this makes Secret Messages stand out as an important release in Lynne's catalog, at least to this reviewer, a long time fan of the artist.

Before we wrap things up, I have to address the fact that the "new" material here was previously released in a different format on the Afterglow boxed set in the early 1990s. However, this is the first time we are hearing this material in the sequence and format as the artist intended. I can't underscore it enough -- especially in these days of playlists, individual track downloads and that sort of 'just give me the best songs' mentality permeating much of popular culture these days -- that the artist's vision for how their music should be heard is a church to be respected and honored. For that reason alone I respect Jeff Lynne even more for seeing this project through to release. This two LP sequence is how the artist wants this music heard, in context, in this running order.  It makes the difference between the just-ok single album released in 1983 and this far superior listening experience.

It even makes me wonder if Secret Messages had been released as Jeff Lynne wanted back in the day, perhaps the album would have cut through as a more substantive release. While we can't re-write history, at least we can enjoy this freshl perspective via this fine reissue. As it stands, this album represents an important transition period for the man who would soon become one of the most in-demand producers of his generation, ultimately working with his heroes The Beatles on their acclaimed reunion singles ("Free As A Bird"and "Real Love") issued as part of The Beatles Anthology series.

The standard weight, dark black vinyl pressing of Secret Messages is quiet and well centered. Very reasonable priced in the $20-25 range for a two LP set, Secret Messages is a no brainer for the ELO fan. You can find it on Amazon (click here) or -- if you are lucky -- maybe even at your favorite brick 'n mortar record store if they have enough insight to stock it. Perhaps after reading this review more will. I can only hope.