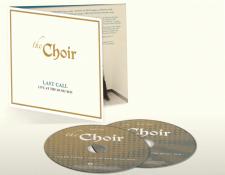 I wasn't planning on reviewing The Choir's Last Call Live At The Music Box album, but the more I listened to it the more I realized there are charms here worth telling you, Dear Readers about.

In case you didn't know this band from Ohio called The Choir basically had one hit in the 60s, the great single "It's Cold Outside" (more on that later) and never released an album in its prime. The later 60s incarnation of this band became the core of '70s power pop pioneers The Raspberries when they joined forces with singer Eric Carmen.

What's that? You don't know The Raspberries? OK well you probably heard some of their head such as "Go All The Way" and "I Wanna Be With You." And unless you were sitting under a rock in the 70s and 80s you probably heard solo hits by Eric Carmen such as the pop standard / ballad "All By Myself" and the big hit from the movie Dirty Dancing "Hungry Eyes."  I have reviewed some of the re-issues (click here) and a reunion live album  (click here). 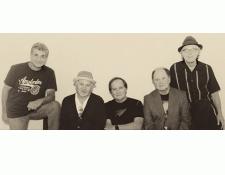 This recording of The Choir is more than just a 50th anniversary reunion and more than just a celebration of the long overdue release of their "lost album" from two years prior.  No, what is neat is that Last Call Live At The Music Box underscores that musical "special something" that comes together when musicians play together for a long time. Even though The Choir hadn't really been touring, this group is clearly well oiled and they sound like they know each other intimately. Thus they pull off not only their own music effortlessly but they take ownership of the cover songs that they do as if it was part of their own personal genetics.

Part of that DNA has to do with certain bands from the 60s who resided in those gray spaces between Pop, hard rock, progressive and heavy-metal even before the term heavy-metal existed. For example, on The Choir's Last Call Live At The Music Box you will hear a remarkable number of performances of songs by no less than Procol Harum. In fact the band opens its set with a cover of their landmark 1967 international smash hit "A Whiter Shade of Pale" and they go on to play "A Salty Dog", "Conquistador," "Kaleidoscope" and even "Shine On Brightly." 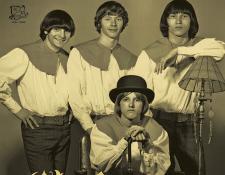 Honestly, know have you ever seen any band cover Procol Harum?

I've never and I've seen far too many cover bands over the years and shared many a stage with them even.

Part of The Choir's success with this has to do with the spot on Hammond organ playing and note perfect vocalizations of Phil Gialambardo who is a near ringer for Procol Harum lead singer and founder Gary Brooker's voice. Perhaps the best complement I can offer is that some of their originals sound like tunes that the current incarnation Procol Harum could (and probably should) cover, particularly "It's All Over."

The "new" songs realy are pretty great, as I was reminded when they played "Anyway I Can" which was on Artifact: The Lost Album.  I reviewed that album, by the way (so click here in case you missed it).  I need to dig out that CD to play it again. I really liked it at the time and these songs sound terrific live. You can find Artifact: The Lost Album streaming on Qobuz (click here). 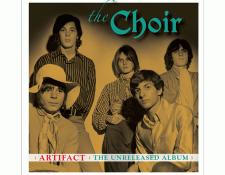 Other gems worth noting include a nifty slow version of "It's Cold Outside," the song which the original version of The Choir recorded in 1966, written by their original drummer. I first heard this song as recorded by no less than The Dead Boys' Stiv Bators, from his first solo album (click here to listen to that great version!).

The other mad great nugget on Last Call Live At The Music Box is a spot on near perfect rendition of Jimmy Webb's classic pop epic "MacArthur Park," replete with vocals that echo Richard Harris' over-the-top delivery and backing singers to help with the big notes at the end (and yes, for those of you not familiar this is the same Richard Harris who appeared in the first two Harry Potter films as Albus Dumbledore).

It's so wonderful to hear this song performed live! 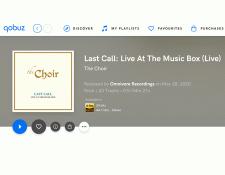 Last Call Live At The Music Box might well be a good introduction for some of you to the music of The Choir as it has a really nice modern sound to it yet with vintage touches that make it feel just right. It's nicely mixed and it sounds especially great in the car - - this is a fun album to take on a road trip!

You can also find Last Call Live At The Music Box streaming on Qobuz in 24-bit, 44.1 kHz quality (click here)

The Choir's Last Call Live At The Music Box is a fun release and I think we could all use a little more fun these days, don't you?