The Best Part of The Trip: Moods 'n Moogs

With the 50th Anniversary of "The Summer of Love" upon us, many people young and old are delving into the essence and joys of that event-in-time, a magical period that is arguably never going to happen again. People are checking out the new Beatles Sgt. Pepper reissues.... and perhaps they are getting tickets for the "new" Monterey Pop International Festival .... and they might even be stocking up on all manner of Grateful Dead, Jimi Hendrix, Janis Joplin and Jefferson Airplane memorabilia.

That is all fine and very cool. 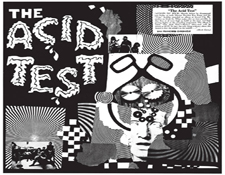 But ... its important to consider and acknowledge that the "Summer of Love" as we know it probably wouldn't have become such a social phenomenon if it weren't for key events of the prior several years. One series in particular, the Acid Tests led by author Ken Kesey and his merry band of pranksters, were a sort of social experiment which -- alongside the freak scene in LA -- helped pave the way for loosening of many conservative collars amidst the mainstream public.  In essence, they helped stir an international movement.

Pointing their plastic finger at me.

They're hoping soon my kind will drop and die,

There are many recordings circulating from the several Acid Test events, some including when The Grateful Dead played there... as well as at the "graduation" event.

However on Record Store Day this year I discovered something I wasn't really aware of: an actual 12-inch vinyl record celebrating the "Sound City" Acid Test. It was apparently something of a private event from January 1966 and, if the internet is accurate, it was recorded at a studio in the South of Market area of San Francisco (called Sound City). The LP features dialogue and music snippets from Ken Kesey and others at the events.

So... yea.... like... if you want the real-deal, proto-Summer of Love experience (sans flashbacks), a dose of this album on Jackpot Records may be the only tab you'll need to ingest. 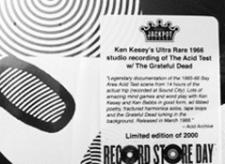 How does it sound? Its pretty tripped out! No pun intended but it really is just that. There are interviews segments and then there are bits of dialogue and riffing rants, ostensibly "under the influence" (if you will). The pressing I will admit is not very good -- mine is a bit off center and a bit noisy.  And, from what I can tell from the interwebs, this material has been out on CD before so you may want to look around for other sources if you just want the recordings and not this limited edition pressing in particular (2000 copies made).

Would I advise you buying it? Well, it depends on how much of a social historian and completist you are. I was disappointed that there wasn't more music on it -- I somehow expected it to be more of the Acid Test session jams with The Grateful Dead (I don't purport to be the world's ultimate expert on Mr. Kesey's output). So, the Dead are supposedly lurking there in the room but there isn't really any jamming as such. Its noodling stuff and its not quite clear who is playing what.  There is one song written by Kesey called "Peggy The Pistol" which I think was played by The Merry Pranksters. So, yeah, there are no epic "Dark Star" moments here.

I'll put it this way (with no disrespect to any of the participants, all of whom I consider pioneers in their own right):  if you were listening out-of-context, you'd hear this as basically a lot of stoned ramblings over instrumental diddling. But it is a historical document containing perhaps the FIRST formally commercially  released stoned ramblings over instrumental diddling! So, it is a significant document of a crossroads in time. And the new release includes liner notes by Ken Babbs, one of The Merry Pranksters and a co-author of a book with Kesey. He was there! 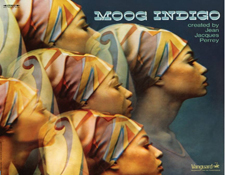 If you would rather have a somewhat less trippy trip down counter culture memory lane, and think you might well enjoy a bit more musical retro spins on your audiophile turntable, you should pick up the new reissue of Moog Indigo by Jean-Jaques Perry. Re-released on vinyl for the first time since the end of the Sixties (aka 1970), Moog Indigo combines euro-flavored '60s style rock and pop jams with then cutting edge Moog synthesizer stylings for a jolly time that would not be out of place on a hippie exploitation film soundtrack or perhaps the dance sequences from Laugh In ('member that?).

What's that you say, Dear Reader in over there towards the side of the stage: you don't know what a "Moog" synthesizer is?  Ok, that is understandable. Please click here to read up via the Wikipedia about this groundbreaking instrument which, in fact, more-or-less made its introduction to the music world at the original 1967 Monterey Pop Festival where Paul Beaver and Bernie Krause were demonstrating it (they bought one of the first ones in 1966).

Going back to Jean-Jaques Perry, he was an early proponent of electronic music releasing his first Moog album in 1967 -- with musical partner Gershon Kingsley -- more than a year before Wendy Carlos' huge hit Switched-On Bach!