The Beatles: Yesterday, Today... and Now 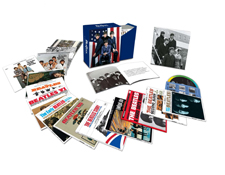 You've probably heard the news by now (oh boy) that it was some 50 years ago in 1964 when The Beatles first arrived-- and almost instantaneously conquered -- America. Accordingly, the first material tributes in what will no doubt be a series of many celebratory offerings around the birth and ascension of The Fab Four have been unleashed on the world. These include a quite curious boxed set -- titled The U.S. Albums -- compiling deluxe CD reinventions of every American-issued Beatle record in both Mono and Stereo incarnations. I say reinvention because these apparently aren't quite the exact actual American mixes that were made back in the day but newer creations based on the decidedly better sounding 2009 remasters. It is beyond the scope of this review to go into the nuances of those differences but it is important to note that they are not the same. The track listings may look like the original American issues but they will play more like the better sounding 2009 remasters, which are based on the original UK mixes.

Yeah, it is confusing and that is part of why I won't be focusing on it. By the time you read this others will have already dissected this beastie for what it is and isn't. 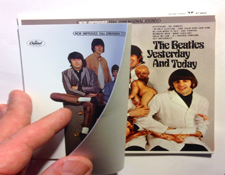 That said, The U.S. Albums boxed set is notable for the reissue, for the first time ever on CD, of the US versions of the soundtracks to the movies A Hard Days Night and Help. The Beatles Story, a sort of audio documentary disc that was issued at the height of Beatlemania, is also finally available for the compact digital format.

However, and perhaps controversially or compellingly depending on your personal stance on the issue, the most significant album included in the reissue is the Yesterday and Today collection from 1966. For those not in the know, up until the Beatles' Sgt. Pepper album, most of the records issued in America did not exactly mirror those in the UK or the rest of the world. The US record market was attuned to 10-12 tracks per album, not 14. Also, in Britain, the practice of putting singles releases on LPs was viewed as redundant, so a slew of Beatle single releases were also prime for the cherry picking and placement into an LP.

Thus, enterprising business folk at Capitol Records decided it would be lucrative to squeeze extra albums from this track differential, padding out imaginary (if you will) albums that didn't exist in the Beatles' regular official UK and world catalog. Here in the US we were treated to a mishmash of Beatle songs presented in a manner that was often times wildly divergent from what the band had intended for us to hear. Some of these albums worked, some not so much. US-only titles included The Beatles Second Album, Something New, the two aforementioned movie soundtracks (which were padded with incidental movie music by producer George Martin in the US), Beatles VI, The Early Beatles and Beatles 65. The US versions of Rubber Soul and Revolver too were compromised presentations of The Beatles' music. 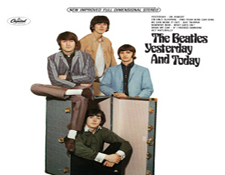 Culled mostly from the Rubber Soul, Revolver and Help albums, Capitol Records issued in 1966 the Yesterday and Today collection amidst some controversy as the initial covers featured The Beatles wearing butchers' smocks and holding dismembered baby dolls bloodied by slabs of raw red meat! For 1966, this was pretty shocking. Retailers balked almost immediately and the albums were recalled and pasted over with a new, much tamer, image of the band and reshipped to the stores. These "butcher covers" have gone on to become among the most coveted of possessions among Beatle fans. You can read more about the controversy here.

Why am I telling you all this?

Well, in the box set -- and for a limited time as an individual disc -- Capitol has reissued a CD version of Yesterday and Today with the original butcher cover art and a very clever peel-it-yourself sticker of the replacement sleeve.

It is pretty cool, actually. Yet, at the end of the day -- and I say this as a collector who still has never found a Butcher cover -- it is but a cute trinket compared to the genuine article.

Now, I recognize that this is an audiophile publication so I have to make some time to talk about the sound on this disc which (as mentioned earlier) is based on the 2009 remasters. These recordings are not the US remixes that were used back in the 1960s, which often added reverb and compression to make the music ripe for the American listening audience (in theory). I'll put it this way: this disc does not present the precise sound you older Beatle fans might remember. It is an approximation. That said, the CD sounds OK, with the mono mix winning hands down over the stereo counterpart due its tighter presentation of the music. To my ear, the new CD sounds a little brighter than corresponding tracks on the Beatles Mono CD Box set. From what I have been able to discern from other Beatlephiles, this CD mixes up a variety tracks from different sources so its a bit hard to make a blanket judgement.

At the end of the day, the CD sounds like Beatle music. I could go on but.... I mean... you, Dear Reader, are an audiophile, so you probably aren't going to want to listen to your Beatles music off this CD anyhow! Am I right? Especially if it was made from a tweaked remaster of a 2009 remaster?