There is much to discuss regarding this new ultra deluxe boxed set celebrating The Beatles' landmark 1967 album, Sgt. Pepper's Lonely Heart's Club Band. 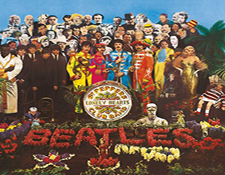 For the skeptics, please note that the Sgt. Pepper's Lonely Hearts Club Band Super Deluxe Edition is not a tossed-off simple repackage cash-in.  The intent behind this project was to do something different celebrating the album's 50th Anniversary, shedding new light on a beloved recording and giving the fans something special. While most people have heard and owned the Stereo version of Sgt. Pepper's Lonely Heart's Club Band over the years, the reality is that The Beatles themselves were not involved with the making of that version of the album; they put all their energy into the Mono mix which, in 1967, was the dominant audio format, Stereo still being something of a niche commercial market at that point, less than 10 years old...

All the commercial radio stations at that point were still broadcasting in Mono.  Most people had Mono transistor radios and maybe some sort of automatic record player with a built-in speaker and amp, if you were lucky. Boomboxes weren't even a thing then. There were no Walkmen. There were no iPods. There were no iPhones.

Mono was the thing...

Accordingly, Producer Giles Martin has thus set out to create a new perspective Stereo mix that honors the intent of The Beatles' original Mono creation, emulating the feel and overall vibe they'd worked so hard on, yet delivering a higher fidelity soundstage which a modern two speaker mix can enable.

For the first time these mixes have been made from the original multi-track recording elements, virtually eliminating the sonic degradation which occurred when "bumping" tracks down in the analog realm.  Remember, Sgt. Pepper's Lonely Heart's Club Band was effectively recorded on a four-track tape machine, so producer George Martin had to innovate to capture all those sounds which The Beatles wanted to convey in this album. He and his team invented a new sync method to link multiple tape machines together while recording -- expanding their number of available tracks at a given time -- yet inevitably still had to create "sub mixes" or "reduction mixes" along the way to free up space on a tape (i.e.. mixing four tracks on one machine down to one on another tape deck, freeing space for more recording elements). 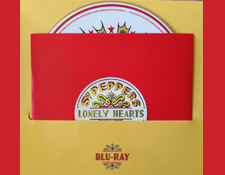 By going back to the original pre-mixed multi-track source material tapes -- which thankfully still exist in the EMI archives -- and bringing them into a modern digital audio workstation type recording program (probably ProTools, the industry standard), Giles Martin has been able to present us with a new mix that literally removes layers of murk which had blanked the original music, be it Mono or Stereo versions.  I have to admit, I was initially surprised at how bright the new recording sounded, but as I've given it repeat listens I realize that phenomenon was more about my ear getting acclimated to the increased detailing and lack of distortion, hiss and other sonic anomalies present in all prior versions than any problem with the recording.

For an added bonus, while Giles Martin was working on this Stereo re-invention, he took things a step further and created a quite lovely and complementary 5.1 surround sound mix.  These recordings are included on the Blu-ray Disc within the Sgt. Pepper's Lonely Hearts Club Band Super Deluxe Edition in high resolution 96 kHz, 24-bit DTS-HD Master Audio and Dolby TrueHd. You also get a high resolution PCM Stereo version (which we'll discuss in Part Two of this series). For those who have yet to get a Blu-ray player, the set includes a DVD containing the same material only in standard resolution DTS and Dolby 5.1 formats as well as PCM Stereo.

Both discs contain not only the full album as well as the single sides of "Strawberry Fields Forever" and "Penny Lane" (songs which were recorded at the same time as Sgt. Pepper's Lonely Heart's Club Band and not included on the original album due to the convention back in the day in England of not duplicating single releases on the LP)  You also get restored great looking and sounding promotional videos for both of those songs plus "A Day In The Life," all of which also have new 5.1 surround and stereo mixes.

And those are just two of the discs in the set! You'll also get four CDs chockfull of outtakes, alternate mixes, the original Mono mix and the new Stereo mix.  You also get a 100-plus page hardcover album-sized book with loads of information and incredible period photos. This set is a Beatle-fan's dream, folks. I'll go into more detail on the other CDs and bonus goodies in Part Three of this review.

But, for now, lets dive into the new 5.1 Surround Sound remix...

Giles Martin has achieved a sweet and happy balance here, creating an immersive listening experience while maintaining a somewhat traditional Stereo sound stage that honors the richness of the Mono mix. So fear not Dear Readers-who-are-haters-of-overly-immersive-surround-sound-mixes: the new 5.1 Surround Sound mix of Sgt. Pepper's Lonely Heart's Club Band feels like a playful old friend who will sometimes sneak up to surprise you when least expected, delivering a tasteful multi-channel listening experience without being heavy-handed.  This new 5.1 mix of  Sgt. Pepper's Lonely Heart's Club Band complements and respects the music and does not draw your attention away from the underlying recording --  an important distinction.