Every now and then an archival release comes out from a company that does it right. The new set called In The Beginning features some of the earliest known recordings by a young pre-fame Wes Montgomery, released in conjunction with the legendary guitarist's estate. Spread lovingly over three dead-quiet, perfectly pressed, 180-gram LPs (or two CDs), the album features a fascinating selection of live and studio recordings by the embryonic guitar master. 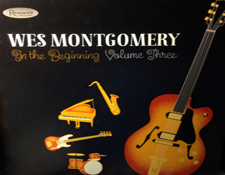 Now, if you are reading this and have never heard of Wes Montgomery, then I do advise you to get on the Internet and read about his background and his influence on people like Pat Metheny and Pete Townsend.

What's that? You don't know who Pat Metheny and Pete Townsend are?  Well, Dear Embryonic Reader, you are in for some joyous discovery should you decide to explore their music. So perhaps starting at the beginning by listening to early Wes Montgomery might not be such a bad thing as you'll later be able to make the leaps of appreciation when hearing his influence come through on Metheny's jazz-rock fusion music as well as Townsend's pop rock and metal music made solo and with the Who... It's all in there if you know what to listen for.

For you audiophiles and fans who prefer studio-grade recordings, one of the most notable aspects of this set is the first-time issue of newly discovered 1955 sessions produced by the legendary Quincy Jones (yes, that same Quincy Jones who some 30 years later produced Michael Jackson's biggest hits). The recordings are embryonic, for sure, but you can hear just how accomplished Wes was even at this early stage. The fidelity is wonderful, crisp, clean mono recorded at Columbia Studios on June 15, 1955. Turns out these were among Quincy's first-ever productions! 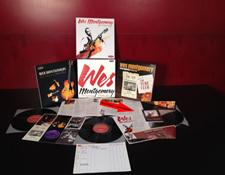 There are also several early tracks cut for the obscure Fresno, California label Spire Records in 1949 -- these include hyper pitched bebop-flavored rave-ups as well as bluesy workouts (with vocals by Sonny Parker). So right there on Disc #3 you are getting pretty much an entire LP's worth of previously unreleased and rare studio recordings!

There are many live recordings in this set which sound remarkably good given they were done on (effectively) consumer-grade gear back in the day. One disc, made up mostly of a live show from August 25th, 1956 at the Turf Club in Indianapolis, finds young Wes backed by a band including his brothers Monk (on bass) and Buddy (on piano) plus Sonny Johnson (drums) and Alonzo "Pookie" Johnson (tenor sax). This is young, aggressive modern jazz and you get to hear Wes playing a lot of single-string stuff here (the guy could shred, even playing just with his thumb!). But you also hear the early stages of his soon-to-be-trademark chordal octave soloing capabilities. It's not easy stuff, folks, and a guitarist has to really be both "inside" the music and their instrument to pull this sort of thing off.

The rarity of finding complete, good-sounding shows of any artist this far back should not be overlooked. Portable recording devices were indeed available but not exactly commonplace, and oftentimes the resultant quality was a mixed bag due to the limitations of the gear, the skill of the recording "engineer" (if you will) and the acoustics of the venue where the music was being recorded. It's not like today, where every iPhone is effectively a mobile recording lab used to document most every concert that happens. So it is fortunate that young Philip Kahl was there recording young Wes and company for the ages. It's also fortunate that the box set producers were able to track Mr. Kahl down to obtain the original tapes for a proper highresolution digital transfer and remaster  (done at 96 kHz / 24-bit). For an audience recording made in 1956 on (probably) modest equipment, it sounds remarkably good, with a small club sound and not a lot of chatter from the audience during the performance -- for the most part, people were listening! 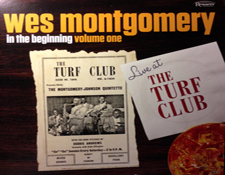 The set also includes live recordings from November 22, 1958 at the Missile Lounge (also in Indianapolis, where Wes was from). There is also wonderful 12-minute version of Jerome Kern's "All The Things You Are" recorded at the C&C Music Lounge in Chicago. While somewhat lesser in fidelity, this 1957 performance is pretty spectacular and thus worthy of inclusion in this set -- Wes is on fire and you hear him break into his full chordal / octave soloing that is just stunning. People in the crowd are grooving on and reacting to this too... very cool stuff to hear. Magic moments of ascension.

Now, getting all this wonderful archival music would be useless without solid information to back it up, and this set excels in that regard. The LP features a nice LP-sized eight-page booklet that is jam-packed with information and photos in a very comfortable-to-read format. It includes interviews with Quincy Jones and the Who's Pete Townsend, excerpts from Buddy Montgomery's unpublished book as well as essays from Downbeat contributor Bill Milkowski, among other insightful pieces. I was also pleased to see that the layout for the booklet in the two-CD version of the package is different than the LP and thus very readable even in the small CD format (55 pages vs. the LP's eight). Brownie points to the set producers for attention to details! 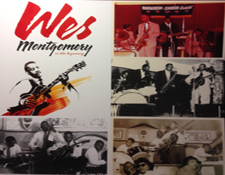 The three-LP version of the set is a limited edition of 1,500 hand-numbered copies. Each LP comes to you on 180-gram vinyl mastered by the legendary Bernie Grundman, pressed at R.T.I. Each set comes in a heavy-gauge cardboard slipcase box (so it won't crush up when you add it to your no-doubt-well-stocked LP collection). Each LP features unique artwork with a decidedly retro flavor as if it were an actual release from the 1950s.  Nice touches!  It also includes a digital download card and super fun collector postcards of unpublished photos.

Anyhow, I'm really pretty impressed by this set. No, I'm VERY impressed by it and hope to pick up some of the label's other releases soon. If they are all done to this standard, then I think this is the kind of label most audiophiles will cherish and want to support. It is refreshing to experience this sort of quality in this day and age where many labels cut corners at every twist and turn.