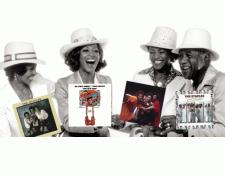 In the mid 1970s, Curtis Mayfield produced an album for The Staples Singers which became a  a much needed hit for the group. That the album is a Mayfield album in all but name, Lets Do It Again -- the soundtrack to the film -- is almost irrelevant because its a great listen start to finish. That it was a #1 hit on both the pop and R&B charts is almost irrelevant. That it has been nearly forgotten by many and out of print for many years, is the bigger issue.

That problem has been rectified thanks to Omnivore Recordings which has not only reissued Lets Do It Again on CD with bonus tracks, but also the three subsequent albums originally released on Warner Brothers Records. They are all solid albums and sound real good as CDs go, very much like the original records (I have most of them on vinyl) with a somewhat brighter sheen that is appealing.

Here's a quick run down of what to expect on these albums which I suspect many of you haven't heard beyond the first hit:

Lets Do It Again 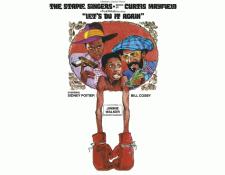 This 1975 release reached #20 on the pop charts and #1 on the R&B charts. The song even made to the#1 slot on the Billboard "Hot 100" chart. It was a popular album and given it was a party record in many ways, finding good condition "clean" copies on vinyl can be somewhat hard to locate. Released on Curtis Mayfield's Curtom Records label (by this point a subsidiary of Warner Brothers Records), the album invigorated The Staples Singers' career and set the stage for the releases to follow. The whole album is great pairing the classic Mayfield sound with the Staples' impeccable voices. The new CD reissue includes all the hit single edits from the period. You can also find the basic album streaming in CD quality on Tidal (click here) and at Qobuz (click here) 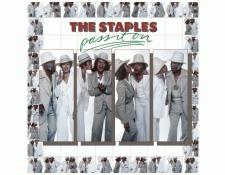 This 1975 follow on should have been a big hit but it stalled for numerous reasons, reaching #20 on the R&B charts but not breaking out into pop crossover territory. Why this happened, I'm not sure. Maybe the songs weren't as strong. I suspect that there might have been some marketing issues given the cover art on the prior album played in perfectly into the look of the period, from albums by Parliament-Funkadelic to jazz-funk jams from Miles Davis (ie. On The Corner, Waterbabies, etc.) -- that cartoon-y look-feel was a thing and the cover design for this follow on album was about as far from that look as could be. Even Lou Reed embraced a comic art feel in his album from that period, Sally Can't Dance. Nonetheless, Pass It On has its charms including the perky "Sweeter Than The Sweet" and the funky swamp groove title track sung by Pops Staples. "Take This Love Of Mine" is a fine groove that pays a bit of musical homage to Marvin Gaye's "What's Goin' On?" (which is not a bad thing). You can find Pass It On streaming in CD quality on Tidal (click here) and at Qobuz (click here) 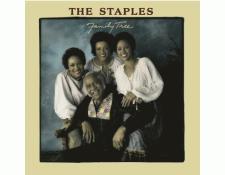 This 1977 release found the band regrouping after Curtis Mayfield's exit and it feels the most awkward at times, ticking off trends of the moment "What You Doing Tonight" mines a disco funk groove that pre-echo's The Jackson's 1978 smash hit "Shake Your Body." Inexplicably, "Lets Go To The Disco" was chosen for the single release, which would not have been my first choice. "Boogie For The Blues" is tad cringe-worthy in retrospect but it probably fit the times. The Staples faire better on the heartfelt funk grooves of "Color Me Higher" and "Hang Loose," both written by Eugene Record  (of The Chi-Lites) so they had some good musical DNA going on there. "I Honestly Love You" is a sweet soulful version of the Jeff Barry-Peter Allen song that was a big hit for Olivia Newton John. You can find Family Tree streaming in CD quality on Tidal (click here) and Qobuz (click here) 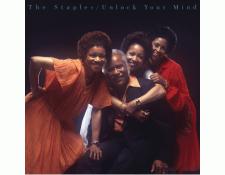 This 1978 release became a fave for me due to their fun 'n slightly funky version of The Electric Light Orchestra's 1973 smash hit "Showdown." They do the song justice here covering it in a way that takes ownership of the underlying composition without relying on ELO's production trappings. They also figured out how to deliver a potentially corny lyric by ensuring that the soul-funk was strong as it is on opening track "Chica Boom." They even pull off an uncharacteristic country-rockabilly honk covering the Elvis Presley hit "Mystery Train," perhaps an homage to The King of Rock 'n Roll who had passed away in 1977. You can find Unlock Your Mind streaming in CD quality on Tidal (click here) and at Qobuz (click here)