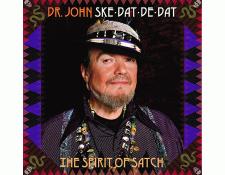 Wow... Has it been about a year already since Dr. John passed away?  Sure has.

The six-time Grammy award winning singer, songwriter, musician and all around ambassador to all things New Orleans left quite a legacy that continues to inspire. In honor of the anniversary of this Rock 'n Roll Hall of Fame inductee's passing, The Last Music Company is reissuing Dr. John's fine last studio release from 2014, replete with new cover art revealing the photo of the artist buried on the original album's design. I like the new artwork much better!

Called Ske Dat De Dat - The Spirit of Satch, the recording is a fascinating reinterpretation of Louis Armstrong classics which pays as much tribute to modern New Orleans sounds as to Satchmo's legacy. At the end of the day, of course, it is a Dr. John album and an excellentwith a fairly jaw-dropping list of collaborators including The Blind Boys of Alabama, The Dirty Dozen Brass Band, Bonnie Raitt, Arturo Sandoval and Terrance Blanchard. 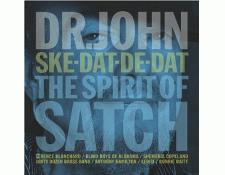 Ske Dat De Dat - The Spirit of Satch -- even with this roster of star partners -- never forgets that it is a Dr. John album. And what a fine Dr. John album it is.  Some of my favorite tracks include 'Tight Like This" (with Arturo Sandoval) and the charming-and-sassy "I've Got The World On A String" (with Bonnie Raitt). The opening take on "What A Wonderful World" is heartwarming and celebratory.

The version of "Mack The Knife" is unlike any version of this song I've ever heard, cross pollinating the Kurt Weill - Bertolt Brecht classic with a funky groove that recalls (to my ear) no less than Elvis Costello's 1989 deep album gem "Chewing Gum" (recorded in New Orleans with The Dirty Dozen Brass Band and Marc Ribot).  Adding in a rap into that groove works terrifically, bringing this slice of phunk into the modern times. 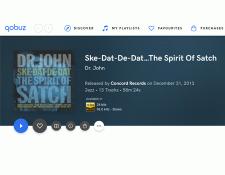 Of course, the groove on Elvis' song may well have been influenced by some other New Orleans classic I am probably overlooking (or don't know). But, with a little bit of Interwebs sleuthing I did find some connective glue between the albums (and, likely, the tracks) : both share a very similar horn section! Dirty Dozen Brass Band members Sousaphonist Kirk Joseph, Bariton Saxophonist Roger Lewis, Trumpeters Greg Davis and Efram Towns and Saxophonist Kevin Harris play on these albums (and quite possibly both tracks), leading to the likely similarity simply due to the distinct nature of their playing. 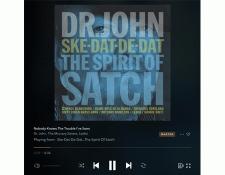 The European pressed, standard weight vinyl version of Ske Dat De Dat - The Spirit of Satch sounds rich, quiet and clear.  Happily it sounds at least as good as the 96 kHz, 24-bit MQA stream on Tidal (click here) and on Hi Res Qobuz (click here), maybe a bit warmer due to my tube preamaps. 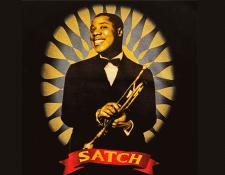 I guess in wrapping up, I suspect some of you might be wondering whether Ske Dat De Dat - The Spirit of Satch is a good tribute to Louis Armstrong?

While it honestly sounds nothing like a Louis Armstrong recording, I do think it succeeds in accomplishing what the title implies: it invokes the joyous spirit of Satchmo and his beloved New Orleans. Just like I did with that Elvis Costello tune, I suspect that if you dig down a bit deeper into this album you will find the links -- direct or indirect -- to Pops' original sounds from the 1920s, brought into the 21st Century by Mac Rebbenack (aka Dr. John).