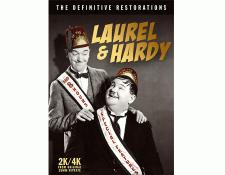 I recently reviewed a Blu-ray Disc celebrating the movies of the legendary, influential and timeless comedy duo, Laurel & Hardy. While working on that review I came upon a bonus feature on one of the four discs in the set which intrigued me, prompting a bit of research beyond it's scope. (to read about that set, click here). I thought some of you might appreciate knowing about this...

To my surprise, there on Laurel & Hardy: The Definitive Restorations I found a fascinating series of music sequences recorded for soundtracks to several of their movies and shorts, including rare demos and such.These recordings were first transferred to special transcription discs in the 1940s. 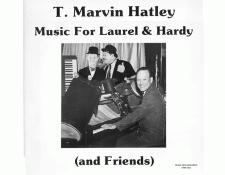 Fragile and one-of-a-kind, the music on these rare discs didn't see the light of day until 1980 when they were carefully cleaned and transferred to tape. The recordings were issued on a very limited edition vinyl record in 1982 which is very much out of print and seemingly difficult to locate (at least based on my initial research on the web).

Thanks to  Laurel & Hardy: The Definitive Restorations, you can now hear some of that great music which was written by LeRoy Shields and Marvin Hatley during the 1930s before the duo's voice overs and sound effects were added. 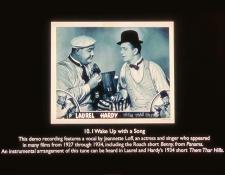 The segments are quite fun and sound excellent considering their vintage.  Some are demos, while others are longer versions than you might hear in the films. For example, the fun pop song "Honolulu Baby" is presented in its full take without the cutaway to Laurel and Hardy's dialogue as in the movie.

However, if you are curious but aren't quite ready to plunk down the $60-80 for Laurel & Hardy: The Definitive Restorations just to hear some of this type of music, there is a more affordable solution out there which may appeal to many of you. 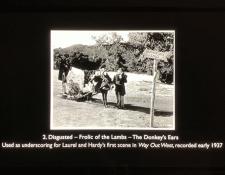 If you have access to streaming services like Tidal and Qobuz and just want to hear the fun period music from the Laurel & Hardy films without soundtrack dialog, there is a wonderful album there by the acclaimed Dutch revival music ensemble The Beau Hunks.

Named after a Laurel & Hardy short film, The Beau Hunks achieved notoriety with their note-for-note transcriptions and modern-made yet authentic-sounding recordings of music from The Little Rascals comedy series.

Made using vintage period instruments and performed with remarkable authority, the music on these Beau Hunks recordings is richly detailed. Yet, they still feel right, honoring the period in which they were supposed to have been recorded. 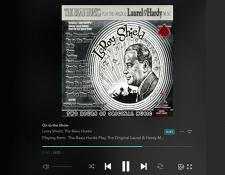 I didn't realize that this fine group had also done a tribute to composer LeRoy Shields -- who, again, along with Marvin Hatley crafted the Laurel & Hardy music -- until I started doing some research for this article.

Like the Little Rascals albums, the results on this LeRoy Shields tribute are wonderful. It is a whole lot of fun to hear -- in great fidelity -- themes such as "On To The Show" and "Dash & Dot."

You will probably know these titles and other songs like "Dance of the Cuckoos" (aka "The Cuckoo Song" and "Ku-Ku") immediately if you've spent any time watching Laurel & Hardy re-runs on television over the years. 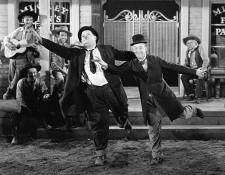 The music on Laurel & Hardy: The Definitive Restorations is grand escapist fun and now you can hear it on Blu-ray Disc as well as streaming (and CDs and LPs).  It is all there waiting for your rediscovery.